Alta Smith was born on June 10, 1886 in Portland, Oregon, where she lived her whole life, as indicated by her obituary. A 1909 article in the Morning Oregonian reveals that she had two siblings, Leslie and Lloyd, and was the oldest of the three children. Her parents were Mrs. and Mr. Albert T. Smith.

A 1904 article in the Morning Oregonian documents Alta's graduation from the Portland Academy that year among a class of thirty-one, where she was recognized and awarded scholarships for exceptional grades and outstanding achievement. According to a 1909 article from the same periodical, Alta subsequently attended Smith College for women in Massachusetts and "held every collegiate office of honor" during her years as an undergraduate student. See below for photo. Upon returning to Portland, Alta married Elliott Ruggles Corbett on September 2, 1909. Elliott and Alta had five daughters, and at one point had as many as six servants in their home, as shown in the 1920 U.S. Federal Census.

Sources suggest that Alta became active in the suffrage movement soon after returning to Portland from Smith College. In 1912, she was appointed to the Finance Committee of the Portland Equal Suffrage League under famous Pacific Northwestern suffragist Abigail Scott Duniway, which is documented in Duniway's Path Breaking: An Autobiographical History of the Equal Suffrage Movement in Pacific Coast States. Alta is also listed as a director of the College Equal Suffrage League in Portland on the organization's program; however, the date of the document's origin is unknown. A 1919 article in the Morning Oregonian reveals that Alta served as president of the Oregon Equal Suffrage League between 1918 and 1919. During that year, she led the group through several important public engagements. An article by the East Oregonian in July 1919 reports that she publicly addressed Governor Olcott, urging him to call a special legislative session to ratify the national suffrage amendment. Despite the governor's resistance, Alta and other representatives continued to make demands and even organized a surprise visit by suffragists to his office in August 1919, the Morning Oregonian reported. According to a November 1919 article in the Morning Oregonian, she presided over a conference at the Multnomah Hotel in downtown Portland on November 5 of that year that brought together the city's mayor, local women, and prominent East Coast suffragists, including Carrie Chapman Catt. Governor Olcott refused to meet with the suffragists personally for months, despite their demands, until Olcott finally organized a meeting in his office with Alta and two other women on November 28, 1919. Alta spoke on their behalf: "We feel that Oregon's influence is needed in the event the so-called doubtful states are to ratify, and to this end we would welcome a special session of the lawmaking body." The statement was published in the Morning Oregonian on the following day. Later on, Alta's obituary states that at the age of fifty- two she became president of the Portland League of Women Voters in 1938 and served for two years. In 1940, she became president of the national league until 1942.

Alta's activism and civic leadership were not limited to the suffrage movement. According to a 1913 article in The Sunday Oregonian, she was an officer of the Domestic Service Bureau in Portland in 1913, which provided safe and reliable employment for female domestic workers. Alta was also involved in civil rights activism during the 1940's, and she was a founding board member of the Urban League of Portland, which she later memorialized as "a professionally staffed social agency working to improve conditions to create a better climate of interracial understanding" in Natália Fernandez and Tiah Edmunson-Morton's "Women of the Multicultural Archives." Alta died on September 9, 1976, at ninety years old in Portland, according to the Oregon Death Index. Reed College awards its students and faculty the Alta S. Corbett Grants for Research on Public Policy Issues in her honor, as listed on their website.

The majority of my sources were news articles from both "Chronicling America" and "Historic Oregon Newspapers." The former is a nationwide database, allowing state-specific searches, while the latter is specific to newspapers printing out of Oregon. Of these newspaper databases, I got my information from Capital Journal, East Oregonian, The Sunday Oregonian and Morning Oregonian. The articles from these publications are reliable primary sources with detailed accounts, dates, and locations of events in which Alta Smith was involved. From Ancestry.com, I gathered records from the U.S. Federal Census, U.S. Passenger Lists, and an obituary. These documents provide important facts and details about Alta such as birth year, occupation, number of children, and most importantly, names. The obituary from the Find-A- Grave Index also supplied her death date and a summary of her life. Another source I used was Path breaking: an autobiographical history of the equal suffrage movement in Pacific coast states by Abigail Scott Duniway, a leading suffragist in the West. The book is a primary source and mentions Alta Smith Corbett specifically. I also used a scholarly article titled "Women of the Oregon Multicultural Archives," by Natalia Fernandez and Tiah Edmunson-Morton, which discusses the accomplishments of prominent women in the Oregon Multicultural Archives, an archive of the stories of minority groups in Oregon. Though this is a secondary source, the origin of Alta's statement concerning the Urban League could not be identified. The College Equal Suffrage League document is available online in the Woman Suffrage Centennial Web Exhibit on the Oregon Blue Book website, which is a government website, though it provides no additional information about when it was published or when the League was founded.

I began my research with Ancestry.com. Since the name I was given was "Mrs. Elliott Corbett," my first objective was to find my suffragist's first and maiden name. After searching for Elliott Corbett in Oregon, the 1920 U.S. Federal Census informed me of his wife's name: Alta S. Corbett. Though unsure whether the S. was the abbreviation for her last or middle name, I searched "Alta S." in Oregon on Ancestry.com, which returned to me an additional census for 1930, a U.S. Incoming Passenger Lists 1878-1960, and a Find-A-Grave Index obituaries archive. The censuses provided basic information, such as the fact that Alta and Elliott had five daughters, Elliott was a banker and Alta was technically unemployed. Both of them were born in Oregon. At one point they had as many as six servants in the household, which shows that they were wealthy. The U.S. Incoming Passenger Lists 1878-1960 was the first document that I found containing Alta's birthday, but it also showed me that she and her husband had traveled to London in 1959, which further suggests that they were more than just economically stable. Documents on Ancestry.com contain much of the same basic information, such as birth date, names, and location of residence, so I often verified these facts by checking whether they were consistent in other documents. Alta's obituary at Find-A-Grave Index finally provided me with her last name: Smith. The obituary also elaborated on Alta's death date and chief accomplishments, which would serve as a guide for further research. Among the most notable facts were that she graduated from Smith College, was the President of the Portland League of Women Voters from 1938 to 1940, and then the director of the national League between 1940 and 1942. She lived in Portland her entire life and was an original board member of the local Urban League, which was devoted to correcting civil rights issues in Oregon's major cities. Having a basic understanding of what Alta's immediate family looked like and the timeline of her life, I sought out sources that could provide more details about her. Alternating frequently between "Chronicling America," and "Historic Oregon Newspapers," I searched for variations of Alta's name, such as Alta Corbett, Alta S. Corbett, Mrs. Elliott Corbett, etc. The most tedious part of this search was manually filtering out the plethora of articles from "Society" columns, which just listed her as a guest at different social gatherings. The articles that attest to her activism both as a suffragist and community leader have been included in the text; however, articles were also helpful in gathering more minor details and facts, like when she graduated high school, and these are referenced throughout the text as well. Having heard about Abigail Scott Duniway's book, Path breaking: an autobiographical history of the equal suffrage movement in Pacific coast states, from an external source, I used Google books to search for "Mrs. Elliott Corbett," in the text and discovered that Alta served as part of a finance committee under Duniway herself. Doing a simple google search of Alta's name and the term "Portland," I came across the Reed College scholarships and grants page and discovered that the institution still grants students funding for research with the Alta S. Corbett Grants for Research on Public Policy Issues. Google also returned as a search result the scholarly article "Women of the Oregon Multicultural Archives" by Natalia Fernandez and Tiah Edmunson- Morton, which discusses Alta's position as an original board member of the Portland Urban League and her commitment to Civil Rights in Portland. This article contains a quote from Alta about the Urban League of Portland, which is credited in the article's bibliography to have come from a Kathleen McMullen at Portland State University; however, the original documentation of this statement could not be found. The Portland College Equal Suffrage League document was

found without doing a search at all; I merely looked through the documents in the Woman Suffrage Centennial Web Exhibit on the Oregon Blue Book website. The website gives little context for the document. Future research on Alta should aim to locate primary sources written both by her and the clubs in which she took part. 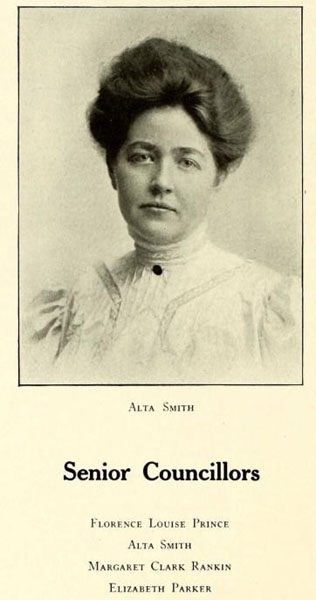 Alta Smith pictured as a Senior Councillor in the Smith College yearbook, 1908.