Mary Simpson Sperry was born on June 3, 1833 in Brunswick, Maine to Thomas Simpson and Elizabeth Simpson under the legal name "Mary Elizabeth Simpson". She had one sister and three brothers in addition to nine other half-siblings. In 1862, she came to California and married to Austin Sperry, an educated merchant from Vermont. They had four children together: Mary A. Sperry, Minna Sperry, Beda Simpson Sperry, and Horace B. Sperry, all of whom were born in California and received an education. According to "Then and Now: Sperry Flour Mill" published in The Spokesman-Review, her husband, Austin Sperry, founded the Sperry Flour Company around 1850. One of their daughters, Mary A. Sperry, became a respected obstetrical surgeon who assisted with delivery in labor and childbirth. After her husband's death in 1881, Mary S. Sperry took over his business, as mentioned in Ann Gordon's The Selected Papers of Elizabeth Cady Stanton and Susan B. Anthony. It wasn't until almost 15 years after her husband's death that she became politically active in the women's suffrage movement.

Mary entered the suffrage movement when the Susan B. Anthony club was founded in her San Francisco mansion at 2100 Pacific Avenue(as documented by the San Francisco Chronicle), which she acquired in 1896 with the fortune her husband left behind. It was created in honor of Susan B. Anthony, the honorary president of the National American Woman Suffrage Association and a leading figure in both the abolitionist and the woman suffrage movements. Mary served as president of the organization for several years around 1902 (before she served as president of the California State Suffrage Association) according to a passage in Ida Husted Harper's The History of Woman Suffrage.

Mary was active in the California State Suffrage Association. She took on the role of treasurer in 1896 under the presidency of Mary Wood Swift of Berkeley, a leader in the woman suffrage movement in Northern California. Eventually, Mary Sperry became treasurer of a joint campaign committee in 1894 that formed between the State Suffrage Association and the amendment committee in an effort to get a bill to establish woman suffrage in California approved by the state legislature. Harper mentioned that most of the women in support of the petition for suffrage did not earn wages of their own, but Mary had the financial capabilities because of the fortune from her husband's flour business. She frequently signed checks for the cause and overall improved the financial standing of the committee.

In 1902, Mary took over the presidency of the California State Suffrage Association from Swift, and remained president until 1909. Under her leadership, the Los Angeles Equal Suffrage Society joined the state association. By this time, the fight for women's suffrage in Southerfn California was well-connected with that of Northern California, empowering the entire movement in the state. Mary also served as an auditor for the National American Woman Suffrage Association, which was the largest national organization that fought for woman suffrage state-by-state, and she represented California at national conventions.

Mary wrote a piece titled "The Object of the Petition" that was published in the San Francisco Call on Independence Day in 1909. Mary worked to collect signatures for a petition to legalize woman suffrage that would to be later presented to Congress. She wrote that it had to be "the largest petition ever presented to Congress upon any subject" in order for it to have power. On October 2nd, 1909, she officially resigned at a suffrage convention in Stockton as the president of the California State Suffrage Association, and Mrs. Elizabeth Lowe Watson of Cupertino succeeded her. It was under Watson's presidency in which California legalized woman suffrage for the first time in 1911. The Los Angeles Times covered the convention and noted how Mary's decision to resign upset her fellow colleagues, and how they convinced her to run again despite her original objections. She lost both the presidency and the vice presidency by five votes. However, her name was added to the association's honorary presidents' list along with her predecessor Mary Wood Swift.

After her resignation, she remained active in the suffrage movement - although not as much as she had been before. In December of 1913, she became president of the Susan B. Anthony Club again. According to the San Francisco Chronicles, she frequently held public gatherings and suffrage meetings in her San Francisco home, such as the reception for Rachel Foster Avery in 1907, vice-president and secretary of the International Suffrage Alliance. After over 30 years in the suffrage movement, Mary Simpson Sperry passed on April 12, 1921 at the age of 88. In her will, she bequeathed a majority of her wealth and her property to her children. She was buried at the Stockton Rural Cemetery, where she and her husband's memorial still remains today.

Most of Mary S. Sperry's media coverage was found in the San Francisco Chronicle, which I discovered through the Gerritsen Collection. The paper was established in 1865 and was distributed along the entire California coast and was deemed the most popular newspaper of the West Coast in the 1880s.

Chronicling America, an online newspaper collection, led me to find several articles from the San Francisco Call, which ran from 1856-1965. Its main purpose was to collect opinions from San Francisco citizens in order to publish and share the submissions. I also incorporated a single "breaking news" article from the Los Angeles Times, which has been covering events nationwide for over 135 years.

My research began with the discovery of a "Mary S. Sperry" on Ancestry Library. I was able to confirm the dates and familial relationships that Ancestry Library gave me through an article published in 1907 by the San Francisco Chronicle. The address of Sperry in the article matched the address given in the San Francisco City Directory of 1891. I also came across many short pieces published by the San Francisco Chronicle between the years of 1896 and 1921 that I used for reference. Much of the information I gathered on Sperry was consistent across the articles. There were also club notes that highlighted her time as the Susan B. Anthony Club president, which again confirmed her address. There is also a quote from Miss Isabel Munson that praised for her as one of the most "famous and well-known suffragettes in the State." From that, I gathered that she was influential in the movement for woman suffrage.

The San Francisco Chronicle also published two articles that gave me a lot of insight on her family - one on her daughter's death, and one on her own. Names were given of close family members, such as the children she left behind and her late husband "Austin Sperry," who owned a flour company. From there, I was able to do more in-depth research on her family. There were a couple cases in which was she referred to by her husband's name. They married November 11 1862, a date confirmed by a family member Peter Pike, JR in a letter in 2009. There is no copy of the letter available to the public.

In a July 4 1909 publication of the San Francisco Call, Mrs. Mary Simpson Sperry's portrait was enlarged to be bigger than any other leader in the California suffrage movement, leading me to conclude this was an important time for her. It led me to a groundbreaking find of her very own opinion piece in the same issue. Not only does it include statistics and a clear portrait of her, but it provides insight to who she was as a person and her responsiblities as president.

I used the Ancestry Library advanced search system to put in Sperry's full name and her birth date to see if I could find any more information. By doing so, I came across her death recorde. In her will, she bequeathed property and money to names that I have confirmed as her intimate family. Ancestry also gave me access to a website with a photo of her grave and other data such as her birthday, June 3, 1833. She was born in Brunswick, Maine, and died in California. Her husband's day of death was July 21, 1881, meaning the first record of her activity in the suffrage movement was over fifteen years after his death. 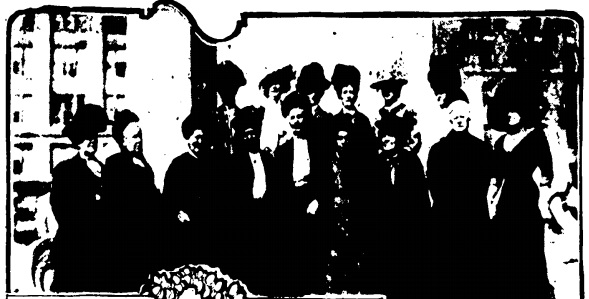 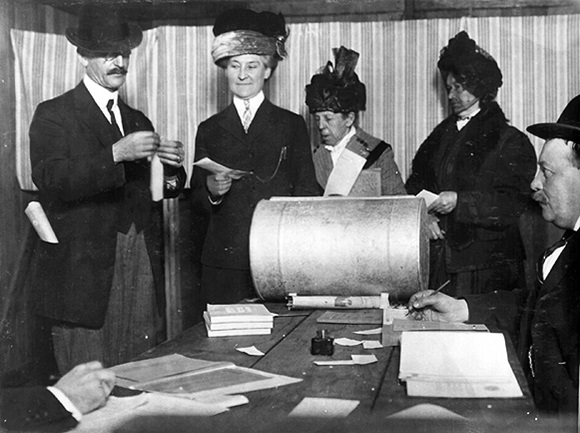 "March 28, 1912 heralded an historic first action for the women of California: This was the first time in their lives they could vote! L to R: Elizabeth Gerberding, Mary Sperry, and Nellie Eyester pose for the camera. SF Voter Registrar Zemansky appointed women to fill one half the number of precinct positions." 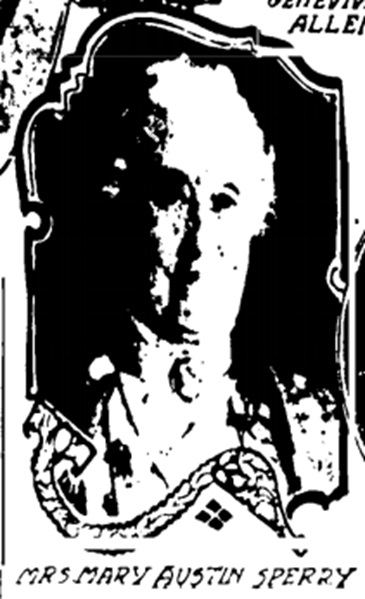 Portrait in the San Francisco Chronicle. 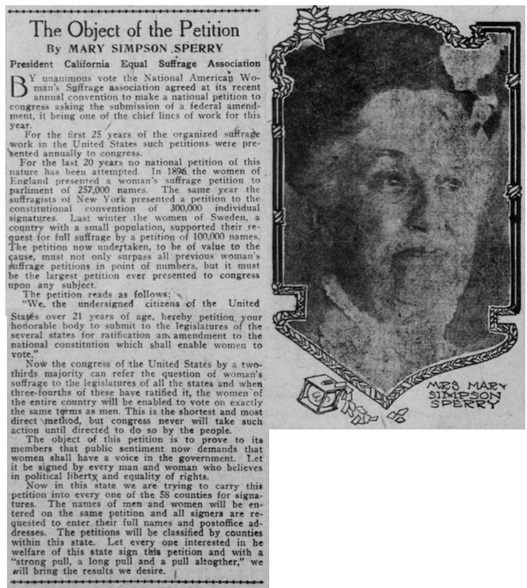 Opinion piece in which Sperry submitted to the San Francisco Call for a special edition that focused on woman suffrage. 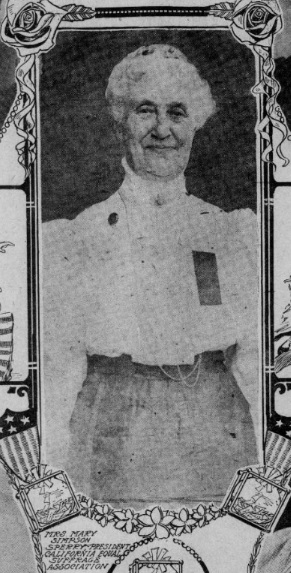 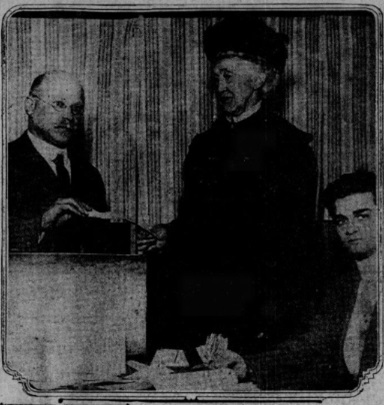