Lida Parce was born around 1867 in St. Joseph, Berrien County, Michigan to Caucasian parents, Leonard Starkweather Parce and Eleanor A. Thompson. According to Portrait and Biographical Record of Arizona, she married General Herbert Fulwiler Robinson of Illinois, a "prominent part [of] the Arizona National Guard," in Phoenix, Arizona sometime after 1887, the year Herbert left Wisconsin. Their marriage took place following Lida's graduation from Albion College, a small liberal arts college in Michigan, and her decision to move out of her home state and start a new life in Arizona. Having spent a good portion of her married life in Phoenix, Lida eventually died in Chicago, Cook, Illinois on October 16, 1923 at approximately age 56.

During her time in Phoenix, particularly between 1900 and 1905, Lida became active in the struggle for women's suffrage and her role in the suffrage movement turned into her main professional occupation. She became the corresponding secretary of NAWSA in 1900 and in 1901 headed a committee for a bill that would "extend suffrage to women without referring the question to the voters," as stated in History of Woman Suffrage: 1900-1920. Unfortunately, this bill received little support and failed to pass. Despite this initial failure, Lida was elected president of the Arizona branch of NAWSA the following year during a convention held in Phoenix. This is explained in Winning Their Place: Arizona Women in Politics, 1883-1950, which mentions that when Lida "replaced Pauline O'Neill as president of the territorial suffrage organization," she had already been president of the Phoenix suffrage club for several years and "published a well-written suffrage newsletter."

As president, Lida called for a suffrage meeting in Phoenix in 1903. According to Winning Their Place: Arizona Women in Politics, 1883-1950, Frances Munds, a fellow suffragist and the leader of the suffrage movement, hailed the meeting as the "first really hard fight for suffrage that was made in any legislature." This praise was due to the fact that Lida cleverly joined forces with labor to get a suffrage bill to vote. More specifically, she created a lobbying team which included T. J. Morrison, a prominent labor leader, "to make sure all bills in the lower house were tied up until the suffrage bill was taken out of committee and voted on." After the bill passed through the house with a sixteen to seven vote, it was debated for two weeks following its introduction to the territorial council by senator Kean St. Charles. Although St. Charles did his best to help the suffragists by holding up a popular labor bill "until enough legislators agreed to support the suffrage bill," it is stated in Winning Their Place: Arizona Women in Politics, 1883-1950 that the bill was eventually vetoed.

Despite her two unsuccessful attempts to get suffrage bills passed through the legislature, Lida still made major contributions to the suffragist movement through her writing. According to History of Woman Suffrage: 1900-1920, Lida "continued propaganda through a little paper which she published and distributed herself through the Territory," which "kept alive the favorable sentiment" and made sure that communication and collaboration continued between the male and female leaders of Arizona's suffrage movement.

Moreover, after Lida moved out of Arizona in 1905, she contributed many essays, most notably "'Work' and Housework," to The Socialist Woman, a monthly Kansas-based magazine published by Josephine Conger-Kaneko. The publication included essays about women's issues from a socialist perspective and aimed to educate women about socialism in order to increase female participation in discussions of the country's political and social issues.

All of the primary sources written by my suffragist were from The Socialist Woman, a monthly publication featuring essays about women's issues through a socialist perspective.

I also used books about important women in Arizona's early politics (Winning Their Place: Arizona Women in Politics, 1883-1950) and the history of woman suffrage (History of Woman Suffrage: 1900-1920). While the first book chronicles early instances of political participation of Arizona women and the second documents the women's suffrage movement from the viewpoint of some of its primary leaders, they both describe Lida's contributions to NAWSA during the years she was active in suffrage.

Lastly, I found a biographical record of important people in Arizona with a section on Lida's husband, which mentions Lida's graduation from Albion College.

I began my research process by looking at the WASM database mention of Lida P. Robinson, which led me to History of Woman Suffrage: 1900-1920. This source detailed Lida's contributions as NAWSA's corresponding secretary and president during the years she was active in suffrage (1900-1905). Next, I did a Google search and found Winning Their Place: Arizona Women in Politics, 1883-1950, which mentioned that Lida wrote for a suffrage newsletter and married a prominent military general. Given this information, I searched Google Scholar for primary sources and found some of Lida's essays in The Socialist Woman. Based on the different pen names, I ascertained that her middle initial stands for Parce, her maiden name. I then searched for "Lida Parce" using the librarian's list of regional sources and found more information in Lineage Book - National Society of the Daughters of the American Revolution, including her husband's name. Next, I found an excerpt about her husband in Portrait and Biographical Record of Arizona, which mentioned her graduation from Albion College. Lastly, the names of relatives provided by the lineage book made it possible for me to find an entry on my suffragist in Ancestry.com's death and stillbirths index from Illinois, which allowed me to find all the missing information about her birth and death.

What's worked best for me has been searching alternate forms of my suffragist's name. Instead of searching "Lida P. Robinson" every time, I was able to find a lot more by searching "Lida Robinson" or "Lida Parce." I also realized throughout the process that sticking to the checklist of resources provided by the librarian was not enough. A lot of the sources didn't give me any results, so I relied a lot on Google and Google Scholar. However, the regional sources worked really well for me once I found additional information about my suffragist (maiden name and husband's name) through other resources.

Portrait and Biographical Record of Arizona: Commemorating the Achievements of Citizens Who Have Contributed to the Progress of Arizona and the Development of Its Resources. Chicago: Chapman Publishing Company, 1901. Accessed April 2, 2017. https://goo.gl/0S2m6y.

The following eight documents are essays about women and socialism written by Lida P. Robinson that were published in The Socialist Woman. Link: https://goo.gl/2dEQS6 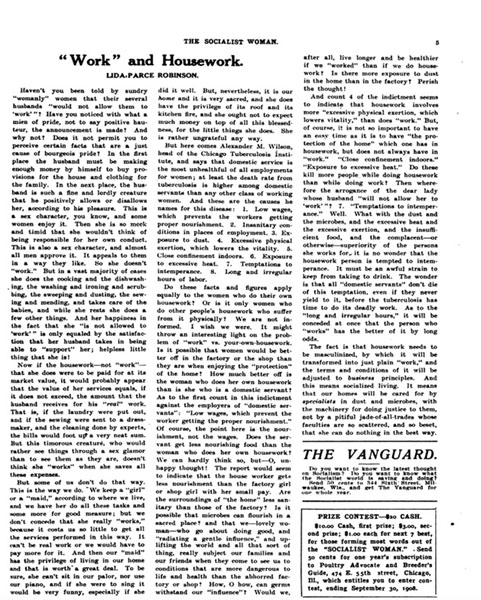 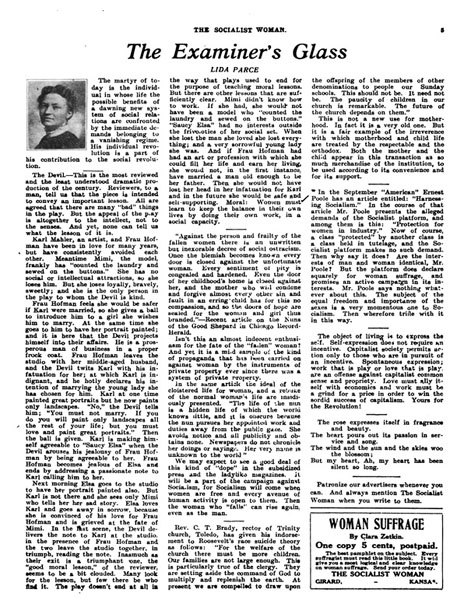 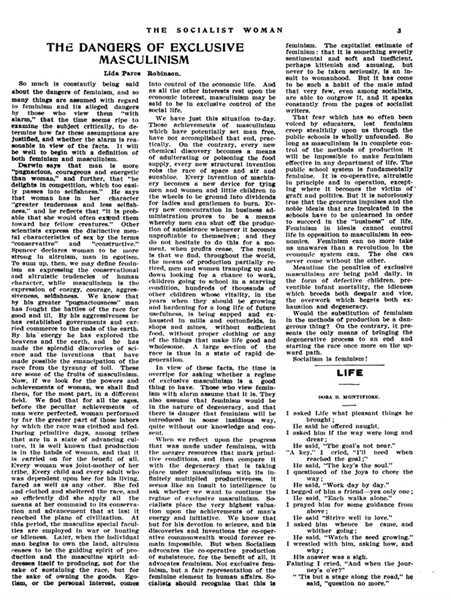 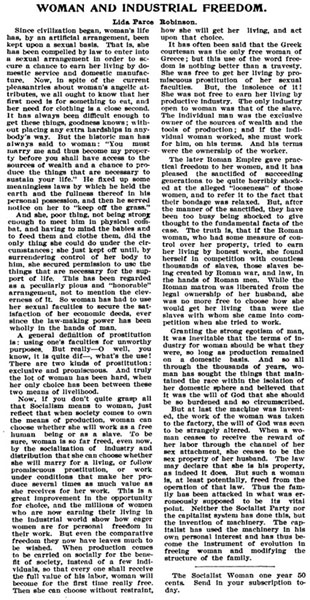 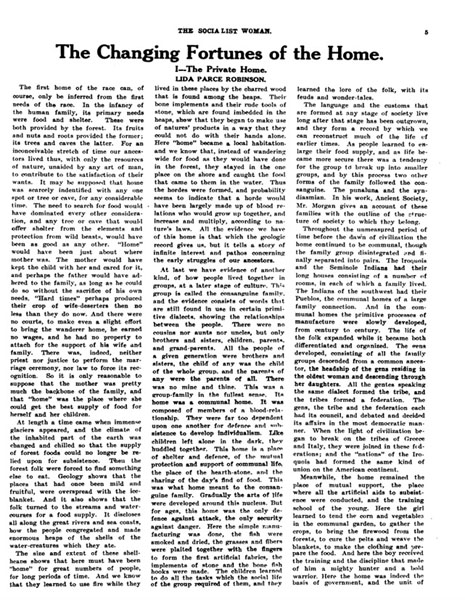 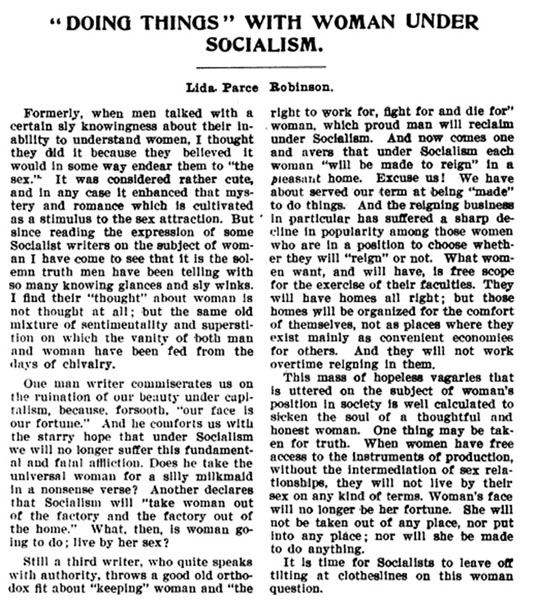 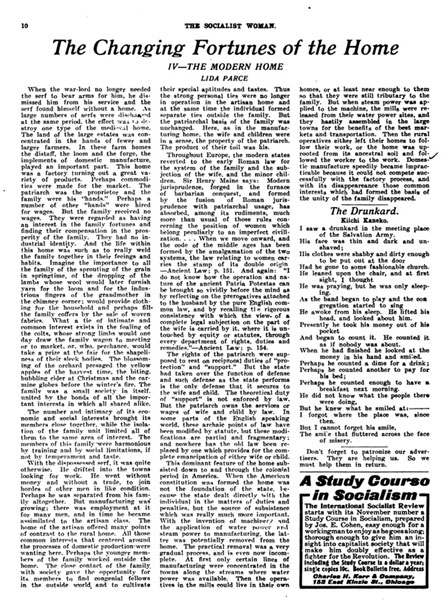