Mary Shannon ("Mary Jr.") was born in Boston, Mass. on September 19, 1836. Her parents, Oliver Noble Shannon and Harriet M. Shannon (née Burlin), separated soon after her birth, and Mary Jr. lived with her father, her paternal grandmother Mary Waldron Shannon, and her aunt Mary Clarke Shannon in Newton, Mass. Her parents were officially divorced in 1856. She never married.

Mary Clarke Shannon was an active philanthropist, drawing from the Shannon family's extreme wealth to support a range of local and national charities, and Mary Jr. followed her lead. Most notably, Mary Jr. served the Newton Home for Orphan and Destitute Girls, founded in 1872 by Mary Clarke Shannon, Mrs. Daniel L. Furber, and Rebecca Pomroy. (Upon Pomroy's death, the home was renamed the Rebecca Pomroy Home for Orphan and Destitute Girls). While not a named founder, Mary Jr. helped manage the Home for the rest of her life. A tribute published in "The Newton Journal" noted that "During the past season, all the potatoes, apples, and most of the vegetables used for the Home, with large quantities of milk, were furnished from her own estate."

Mary Jr. was also an abolitionist, an educational reformer, and an active member of the National American Women's Suffrage Association. She worked with a number of well-known progressives, including Booker T. Washington and Julia Ward Howe, and she leveraged the Shannon family's wealth and social prominence to recruit others to her causes. She died of heart failure in Newton on April 19, 1901. Her death is lamented in The History of Women Suffrage, Volume 5.

While Mary Jr.'s work with the Pomroy Home is relatively well-documented, accounts of her abolitionist and suffragist activity during her lifetime are sparse. However, her will conveys her commitment: Mary Jr. bequeathed more than $100,000 (approximately one sixth of her $600,000 fortune) to various local and national charities. Notably, she left $10,000 to the Pomroy Home, $10,000 to the New England Hospital for Women and Children, $15,000 to the all-female Wellesley College, $25,000 to various historically African American and Native American normal schools (including Booker T. Washington's Tuskegee University), and $2,000 to the New England Women's Suffrage Association. The latter is referenced in The History of Women Suffrage: When Mary Jr.'s will was finally executed in 1917, NEWSA voted to donate the $2,000 bequest to the National American Women's Suffrage Association.

Hodgon, George E. Shannon Genealogy; Genealogical Record of One Branch of the Shannon Family in America. Rochester, NY: The Genesee Press, 1905. Retrieved from Retrieved from https://books.google.com/books?id=1kY7AQAAIAAJ&pg=PA551&dq=shannon+genealogy&hl=en&sa=X&ved=0ahUKEwimz-CuzMXSAhWjjVQKHTNRAbQQ6AEIGzAA#v=onepage&q&f=false; 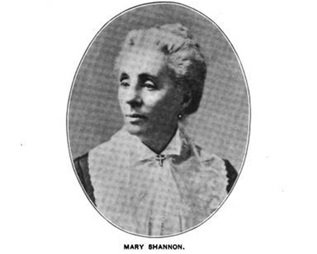