Emma Jane Higgins was born April 28, 1874 in Athens, AL to Molly Sartain and Hiram A. Higgins. Emma and her sister Clara were still quite young when their father died in the Memphis yellow fever epidemic of 1876. Emma married Henry McCluskey Lupton November 18, 1895 in Davidson County, TN. The couple was living in Clarksville when their only child Henry, Jr. was born December 16, 1896. By 1900 they were well established with Henry working as a bookkeeper in a tobacco business and Emma as a church organist. They and owned their home at 518 Commerce Street in Clarksville.

Emma Lupton was one of the organizers of the Clarksville Equal Suffrage League's July 31, 1914 meeting. She was the vice-president and gave one of the primary speeches at the event. She remained consistently active in the organization throughout its existence. She was publicity chair in 1917 and hosted a meeting in her home on February 28, 1918.

Tennessee enacted legislation in April of 1919 for women to vote in presidential and municipal elections. Announcements from election officials took note that local women were slow to register: "It would seem that the ladies are not taking very enthusiastically to their new privilege, as it is estimated that less than 100 had registered up to this morning." Emma was quick to respond with her comments to the newspaper: "The suffragists of Clarksville expect to register and do their part, even excusing Brother Osborn's comment that they all did not rush down madly the first two hot days and clamor for a registration blank . . ."

In April of 1920 as chair of the League of Women Voters for 6th Congressional District, Emma Lupton put out a call to all the women's clubs in the district to participate in the May 18-19 convention in Nashville to prepare themselves for the new responsibilities of citizenship. She also promulgated the league's endorsement of the governor's call for the legislature to address the issue of establishing a poll tax for women in the interest of equality. At the May 3, 1920 meeting of Clarksville women, Emma Lupton was endorsed as a member of the State Democratic Committee. Emma was among the group of Clarksville women who attended the Nashville convention.

In preparation for the May 29, 1920 municipal school bond election, two mass meetings were held in Clarksville to inform women about registration, voting and the school bond issue. Emma Lupton opened the May 7th meeting and introduced the speakers.

In July 1920 Emma Lupton presided over the organizing meeting and election of officers for the Clarksville-Montgomery County League of Women Voters. The focus of the league was ratification of the proposed federal amendment with the 25 charter members committed to the task. She was vice-president, on the Ratification Committee and was a charter member of the league. She helped plan, issued invitations and introduced the governor at the reception held for him by the League when he visited Clarksville on July 26, 1920. This event was intended to show support and urge him on toward the ratification of the federal amendment.

Emma Lupton was involved in the community throughout her life. She was a music teacher for many years, the organist at Madison Street Methodist Church, and a member of the Monday Evening Music Club. She was a charter member of the Montgomery County Historical Society in the 1920s. In 1942 she wrote an extensive history of the Madison Street Methodist Church. She died on April 9, 1955 at 80 years of age. 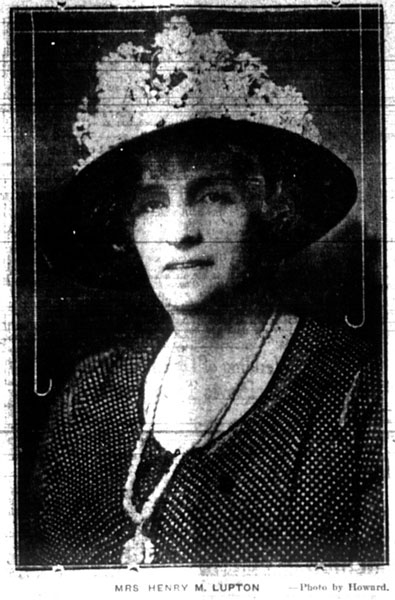