Beaumelle Sturtevant-Peet was born in Cornwall, Vermont on April 27, 1840 to Slyvester Bird and Elizabeth De Long Rockwell. Her paternal lineage can be traced back to John Rockwell of Stamford, Connecticut. According to a book on women's movement in California published in 2000, her education consisted of receiving formal training in one of the best seminaries in Burlington, Vermont. She married Ethan Allen Sturtevant in Middlebury, Vermont on June 12, 1866. According to History of Michigan (Volume 2), Ethan was a lawyer who graduated from Middlebury College of Vermont with a B.A. in 1863, and then from the University of Michigan with a law degree in 1864. Beaumelle moved with him from Middlebury to Saginaw, where he had built his practice. Beaumelle and Ethan had two daughters, Fannie Beaumelle and Mary Beaumelle, and one son, Robert Taft. Ethan retired in 1870 because of his failing health, and the couple moved back to Middlebury and lived there until June 10, 1878 when Ethan died at the age of 40.

As a young girl growing up in Vermont, Beaumelle was educated in social reform by her grandfather, who boycotted products made with slave labor. Beaumelle became an abolitionist and a suffragist, and went on to help create the Vermont Woman's Christian Temperance Union (WCTU). She first served as secretary for the Vermont chapter of the WCTU, and later spent four years as state organizer touring State to State. Her responsibilities frequently took her away from home but her husband Ethan always supported her work. After his death, she continued her work in the Vermont WCTU until 1883, when she married Edward Warren Peet, a widower with two children, and moved to California. Beaumelle, who changed her last name to Sturtevant-Peet. Beaumelle soon made a name for herself in the Northern California chapter of the WCTU, where her charismatic ability to organize people helped her shrewdly represent the WCTU at the state legislature. She was a parliamentarian, and later become the Superintendent of Legislation for the WCTU in 1884. She remained in that position through every legislative session, and represented that organization with bills or temperance measures related to suffrage. Beaumelle planned an amendment campaign with petitions and memorials and other methods of educational agitation.

In 1891, she was elected president of the California WCTU. As president, she advanced an active and conciliatory position towards immigrants and labor groups, urging temperance women to work with these groups rather than against them, and to organize working women's clubs and establish industrial classes for women. As a believer in Christian Socialism, she was closely allied to the Bellamy Nationalist wing of populism. Under Beaumelle's leadership, the WCTU collected 23,000 signatures in support of a bill granting women the right to vote for school board members. The petition which was very influential in getting the School Suffrage bill passed in the California Legislature in 1893.

Her social and philanthropic life was not just limited to the WCTU. She also served as the vice-president of the Child's Welfare League of Oakland, and was a member of the Civic Center League and Oakland Club.

After serving the WCTU for 17 years as president, Beaumelle stepped down in 1908. It is unclear if she remained active in the woman suffrage movement after 1908. She died in 1921.

The Women and Social Movements in the United States Database has a short bio. Furthermore, in this database I found annual reports and meeting minutes of the WCTU. Another source I used was the Annual Report of Superintendent of Legislation and Petition, by National Woman's Christian Temperance Union. The report describes the varied legislation and petitions adopted by NWCTU in 1884. I also utilized History of Woman Suffrage, vol. 6: 1900-1920, edited by Ida Husted Harper. History of Woman Suffrage was produced by Elizabeth Cady Stanton, Susan B. Anthony, Matilda Joslyn Gage and Ida Husted Harper, published in six volumes from 1881 to 1922. It is a history of the women's suffrage movement, primarily in the United States. Another source I used was Ancestry.com which is the largest for-profit genealogy company in the world. It operates a network of genealogical and historical websites focused on the United States. I also used the California Digital Newspaper Collection (CDNC), a freely-available archive of digitized California newspapers, accessible at the project's web site. It contains millions of pages, ranging from the first publication in 1846 to contemporary issues.

Women and Social Movements in the United States database proved to be a good source and provided a good starting point for my research. I learned about Peet's tenure as the president of California WCTU from the database and it also provided me with her short bio which helped me form an overview of her life. It was also exciting to find out much about her life in the book Becoming Citizens: The Emergence and Development of the California Women's Movement, 1880-1911 (Women in American History) by Gayle Gullett. I was unable to find out the finer details about her amendment campaign and work because I didn't have access to the primary sources that Gayle did. For example, many of the sources that Gayle uses are from multiple volumes of Pacific Ensign and Woman's Journal which were inaccessible to me. I tried searching for her college education/education in genealogy databases and library databases and google searches but found nothing. I used Ancestry.com several times to confirm my hypotheses about her personal life details and have found information on her daughters and her two husbands. I tried to find information on her death on dobsearch.com & ancestry.com but found nothing initially. Then I used different combinations of her name like Mrs. Beaumelle Sturtevant-Peet, Mrs. Beaumelle S Peet, Mrs. Sturtevant, Mrs. Sturtevant-Peet, Mrs. Beaumelle, Beaumelle Peet and finally found that she died in 1921. I have been unable to discern when she stopped becoming active in the suffrage movement. Using the aforementioned book, I confirmed that the stepped down from the Presidency of California WCTU in 1908. But I cannot find any information about her activeness after 1908. Searching for her in newspapers was fruitful and I was thrilled to see her sketch in one of the articles in San Francisco Call in California Digital Newspaper Collection. I also found her photo in A History of the Woman's Christian Temperance Union of Northern and Central California.

Leonard, John William. Woman's Who's Who of America: A Biographical Dictionary of Contemporary Women of the United States and Canada, 1914-1915, pp. 794. LINK 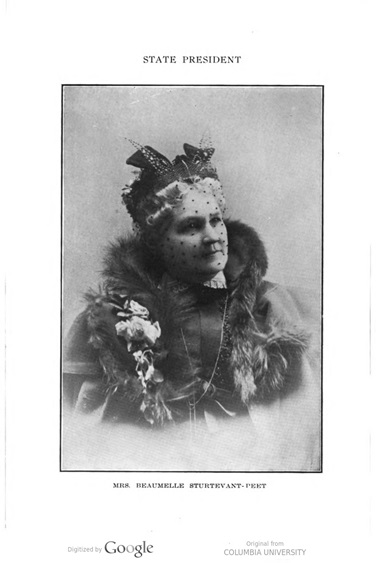