Agnes Ray was born in the 1860s. Census accounts vary. The 1920 census suggests anywhere between 1863 to 1869, the 1900 census references August 1862, and her death record gives October 31, 1862 as her date of birth. Her parents both appear to be immigrants, with census data showing that her father was born in Ireland and her mother was born in England. Agnes herself was born Agnes Harris in Illinois. Little recorded information is known about her life prior to California.

In California, Agnes Harris became known as an influential reformer and suffragist. Before that, however, she became known as Agnes Harris Ray when she married her husband, Fisk M. Ray on December 12, 1882. The ceremony took place in Alameda, where they lived. Census records show that Fisk Ray himself was originally from Michigan. He worked as a businessman, specifically within the metals industry.

The earliest records of Agnes Ray's activism were seen in 1908. A July article in the San Francisco Call, titled "Suffragettes to Storm Convention," documents her efforts as a leader of a campaign for activists to "besiege" the Republican convention. There, they were reportedly able to rally many male politicians to express support for the suffrage cause.

The bulk of the records of Agnes Ray's suffrage campaigning concern her influence and efforts with regards to the 1911 California suffrage vote. On October 11, 1911, the San Francisco Call ran an article describing her position as the President of the Suffrage Amendment League. As the suffrage vote approached, she partnered with the College Equal Suffrage league to pool their coalition's efforts. In her capacity as president, she reportedly organized campaign efforts, worked the polls, and even mailed postcards to spread the word. One such postcard is included in the suffrage record book "Winning Equal Suffrage in California; Reports of Committees of the College Equal Suffrage League of Northern California in the Campaign of 1911." Another Call article written in January, titled "Mrs. Agnes Ray Will Address Suffragettes," captures her role as a featured speaker and presented a "resume" on her knowledge of the New York suffrage movement to the organization.

Two years later, Agnes Ray would run for the California School Board to increase the representation of women. On February 27, 1913, Ray announced her candidacy for the position of school board, as reported in the February 28th edition of the San Francisco Chronicle. On May14th, a San Francisco Call article describing the campaign praised Ray in glowing terms, with a campaign source describing her as a playwright, author, musician (saying that she was formerly the head of a conservatory), and businesswoman. Part of Ray's motivations, as articulated in the article, were as a mother of three children, all enrolled in Oakland area school districts. Next, however, sources conflict. The May 7, 1913 edition of the San Francisco Call reported that Ray lost the direct election to a Mr. Frank B. Cook. However, there are also many references to her later acting as a member of the Oakland Board of Education. For example, the San Francisco Chronicle described her activities, including speaking to a luncheon as a member of the Board on November 13, 1913. As a relatively high profile suffragist, Ray was involved in several other incidents. The San Francisco Call reported in October 1911 that a group of suffragettes were arrested for speeding. In court, however, many high profile suffragists showed up to support their plea of not guilty.

Much later, Agnes Ray passed away on March 31, 1964, in Alameda, where she had spent the majority of her life.

The majority of my other sources were local newspapers. The California Digital Newspaper Collection provided excerpts of the San Francisco Call, including articles that described Agnes Ray's role as the President of the Oakland Suffrage League and some related events. That paper later merged with others to become the San Francisco Examiner. I also referenced other local papers, such as the Oakland Tribune and the San Francisco Chronicle. I also utilized government documents such as Census reports, marriage records, and death records in constructing this biography. Finally, Winning Equal Suffrage in California: Reports of Committees of the College Equal Suffrage League of Northern California in the Campaign of 1911, a book published by the National College Equal Suffrage League, provided a copy of a postcard written by Agnes Ray.

I began my search by going down the list of resources suggested by the Library Guide. First, I began with the "Women and Social Movements" link, which lead to a secondary source that gave some information on Agnes Ray as a suffragist. That provided a decent frame of reference to begin looking for primary sources and specific details. Next, I turned to the Ancestry Library resource, which lead me to several useful government documents, such as census records, marriage records, and death records. After cross referencing and comparing these records, I determined that they were in fact referring to Ray and moved on to the other databases. However, most of the other databases failed to yield any useful resources. After going through the Gerritson Index, American Memory: Women's History, and most of the other resources provided on the guide without any useful finds, I took my search to the wider internet. I used Google to search for information. My searches turned up several old newspapers; these were the documents that best gave me a feel for Ray's life. However, after finding a few good sources, I realized that virtually all of the google results concerned only her role in the 1911 California suffrage campaign-- I had hit a wall in my google searches. Furthermore, all of the books I had found through Google generally had very limited information; most only referred to the 1911 campaign, rarely with more than a sentence or two of detail. To try to dig deeper, I returned to the Ancestry Library source to research her family, which yielded some information on her husband. I also turned to the "Chronicling America" database, which yielded more information through historical newspapers about her activism and her campaign for her school board. After digging through these historical papers, I felt that I had found enough information to write the bio.

"Mrs. Agnes Ray Desires to be on School Board: Prominent Suffrage Worker Files a Declaration of Candidacy." San Francisco Chronicle 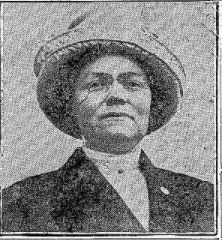 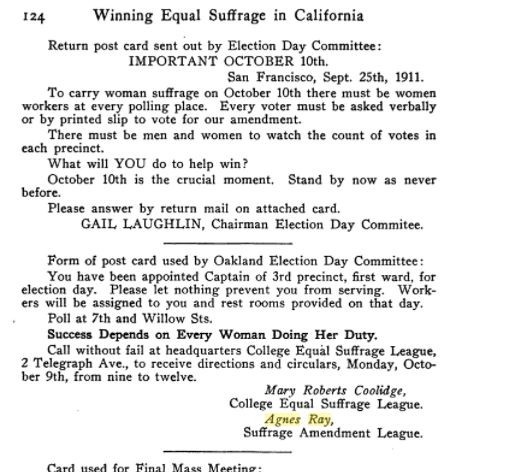