Biographical Sketch of Gertrude B. Newell

Gertrude B. Merrill was born in 1862 in Boston to Joshua and Amelia G. Merrill. She married William Newell of Boston in 1891 and had two sons, William E. Newell (born in 1893) and David C. Newell (born in 1894). In the 1900 census, Gertrude B. Newell was listed as widowed, indicating that William Newell died between 1894 and 1900. She then lived with her parents, children, sister, and sister's family in Brookline. Later, she attempted to switch her permanent residence to Topeka, Kansas to be able to vote in the 1916 election, but there is no evidence that she ever lived in Kansas. She resided in Boston until 1943, when she died.

She was elected in 1912 as chairwoman of the executive board of the Woman Suffrage Party in Massachusetts (formerly the Massachusetts Woman Suffrage Association). In 1913, she attended the 45th convention of NAWSA in Washington, D.C., which pushed for a national amendment securing female suffrage. For the rest of her suffrage career, Newell would be a proponent of a national amendment as opposed to individual state actions. In 1913, she was elected president of the Brookline Equal Suffrage Association, and would lead the Norfolk County organization committee (part of the Brookline Equal Suffrage Association) in 1915.

In 1916, Newell was one of 23 women from the Congressional Union for Woman Suffrage to campaign on the "Suffrage Special" tour. The tour traveled to western states with female suffrage to consolidate the branches of the Congressional Union under unanimous support for a national suffrage amendment and to pressure the Democratic party to support the amendment. The tour departed Washington, D.C. on April 11, 1916 and toured California, Colorado, Idaho, Illinois, Kansas, Montana, Oregon, Utah, Washington, and Wyoming, as well as Indiana, Ohio, and Arizona (which did not yet have female suffrage). It culminated in a convention in Chicago on June 6, 7, and 8 to support the national amendment, and returned to Washington, D.C. on May 15, 1916 to present Congress with petitions.

While on the "Suffrage Special" tour, Newell, along with Katherine Morey (another Brookline suffragist) and Harriet Stanton Blatch (daughter of Elizabeth Cady Stanton), attempted to renounce her Massachusetts residence and become a resident of Kansas. At the time, women could vote in Kansas and not in Massachusetts, and 1916 was a presidential election year. Kansas law stated that a person could vote in Kansas if he or she owned property there for six months. Accordingly, the women had rented a room in Topeka and stored clothing in it for several months prior to their visit in April 1916. However, according to the Leavenworth Times, the women were initially denied voter registration in Topeka on April 13, 1916 because they did not meet the residency requirement. Ultimately, though, Blatch successfully registered to vote in Kansas, but there is no evidence that Newell did. Nor did she move to Kansas; Brookline directories from 1917 and 1919 show that she was living in Brookline during this period. 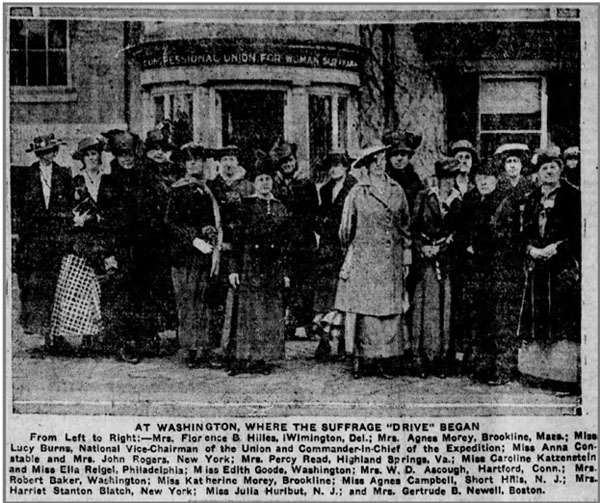 The members of the "Suffrage Special" tour before departure in Washington, D.C. Photo from Arizona Daily Star, printed April 21, 1916. Gertrude B. Newell is on the far right.