Pauline Marie Schindler was born in January 1865 to Prussian immigrants Rosalie and William R.F. Schindler in San Francisco, California. Journeying to the United States in 1854, William served as an editor and clerk for the U.S. Army and moved to Prescott, Arizona during Pauline's teenage years. During this critical time, Pauline began a lifetime of political advocacy, starting with the Arizona temperance movement, a precursor to her later suffrage work. While living in Prescott, Pauline met William "Buck" O'Neill and the two were married in 1886. William was a larger-than-life Prescott politician who introduced the first women's suffrage bill into the Arizona territorial legislature. In 1897, the O'Neills adopted their only child who would survive to adulthood, Maurice. Shortly after, William died in the Spanish-American War while serving as one of Theodore Roosevelt's famed Rough Riders, leaving Pauline a well-known and wealthy widow of a war hero in 1898. With this powerful new stature and wealth, O'Neill inspired widespread respect from her community and continued to make a name for herself in through her own political activism.

In November of 1899, prominent national suffrage leaders, including Carrie Chatman Catt, descended upon Phoenix to help organize the territory's first suffrage organization. Pauline O'Neill was elected the first president of the Territorial Equal Suffrage Association. After the Arizona state constitution ignored women's suffrage on the eve of statehood, the movement worked to place an initiative on the general election ballot that would amend the constitution. After years of persistent grassroots advocacy and petitioning, O'Neill and her fellow suffragists were victorious in November of 1912 when a suffrage amendment was added to the state constitution through the new initiative process. Coinciding with her suffrage work, O'Neill "quietly" married Eugene O'Neill, the brother of her late husband, in May 1901. Eugene worked as a local Phoenix lawyer and was actively involved in Arizona politics, even serving in the state legislature.

The fight for equal suffrage did not stop after 1912, as O'Neill devoted herself to advocating for a national constitutional amendment. O'Neill acted as president of the Phoenix Civic League and lobbied her representatives in Congress to support a suffrage amendment that enfranchised all American women, despite their state of residence. In 1916, O'Neill won a seat in the Arizona House as a Democrat, making her the first woman ever elected to represent Maricopa County. Her two terms were devoted to garnering support for the Nineteenth Amendment and advancing legislation that helped women and children, especially through education reform. As a legislator, she was also a passionate supporter of the war effort, introducing a bill that punished those voicing antiwar sentiments and chairing Arizona's Women's Committee of the Council of National Defense. During her first term, tragedy struck again when Eugene passed away in 1918. After her time in the Arizona legislature and an unsuccessful bid for a seat in Arizona's upper house, O'Neill moved to Los Angeles, California. Unfortunately, little information exists about her life after moving to California and her time in public service. She died in Los Angeles at age 96 in January 1961.

"There Was More to Pauline O'Neill than Buckey." The Daily Courier. July 19, 1998. Chronicling America. 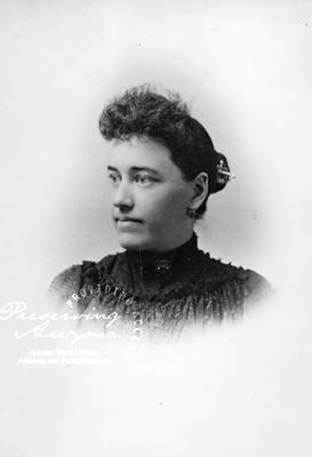