Judith Winsor Smith was born Judith Winsor McLauthlin on November 26, 1821 in Marshfield, Massachusetts to Lewis McLauthlin and Polly (Hathaway) McLauthlin. Her parents were both descendants of Mayflower passengers and her father was an abolitionist. On November 25, 1841, she married Silvanus Smith at the First Church (Unitarian) in Duxbury, MA, the second church in New England. Silvanus was a shipbuilder who remained involved in the abolition and suffrage movements throughout his life. The couple had six children, Sidney, Frances, Zilpha, Mary, Erasmus, and Jennie. They lived in North Pembroke, MA until 1854 when they moved to East Boston, where Judith Winsor Smith would reside for nearly 65 years.

The home of the Smiths at 76 White Street was a short distance up the street from Silvanus Smith's shipyard. Silvanus Smith and Donald McKay were noted builders of clipper ships, and McKay lived next door to the Smiths. In addition, the Smiths spent summers in Scituate, MA, at first in the abandoned lighthouse keeper's cottage at Scituate harbor, and then in a cottage they built close to the lighthouse in 1896-1897.

In addition to her membership in these associations, Smith attended rallies and gave speeches for the suffrage movement. She continued to do this even as she aged, attending the suffragist "Victory" parade in Boston on October 16, 1915, at the age of 93. She was also still giving speeches at this age, and was noted as "the world's oldest suffrage orator." On January 8, 1892, Smith gave a speech entitled "How to Make a Happy Home" in which she said, "it makes a home happier to . . . help on unpopular causes. The happiest homes I have known are those of reformers, who look beyond the centre of their own homes, and try to help others to better ones." This speech was later published in Woman's Journal, the leading women's rights periodical that had been founded in Boston in 1870. She was a frequent contributor to the journal.

Smith was active in the woman suffrage movement early on. Smith was friends with some of the most prominent suffragists in American history, including Lucy Stone, Henry Blackwell, Julia Ward Howe, and Mary Livermore. She was also very close with Alice Stone Blackwell, the daughter of Stone and Blackwell, and communicated with her frequently.

Smith lived to see the ratification of the 19th Amendment, and to vote in the 1920 presidential election. In 1921, she met President Harding and told him that she had waited 75 years for the opportunity to cast her ballot for the first time. Judith Winsor Smith died on December 3, 1921, in the home she shared with her daughter Zilpha in Jamaica Plain, MA. She was survived by four children, 14 grandchildren, and 18 great-grandchildren. Two of her daughters, Zilpha and Frances, also worked for social causes throughout their lives.

Extensive archival collections of Judith Winsor Smith's papers and family photographs can be found at the Massachusetts Historical Society. Some of her papers are in the Woman's Rights Collection of the Schlesinger Library, Radcliffe Institute, Harvard University. Family records and photographs are also in the Drew Archival Library of the Duxbury Rural and Historical Society.

Robinson, Harriet H., Massachusetts in the Woman Suffrage Movement: A General, Political, Legal and Legislative History from 1774, to 1881 (Boston: Roberts Brothers, 1881), 62 (Mrs. J. W. Smith one of three on a committee that arranged the two-day MWSA convention in 1881) 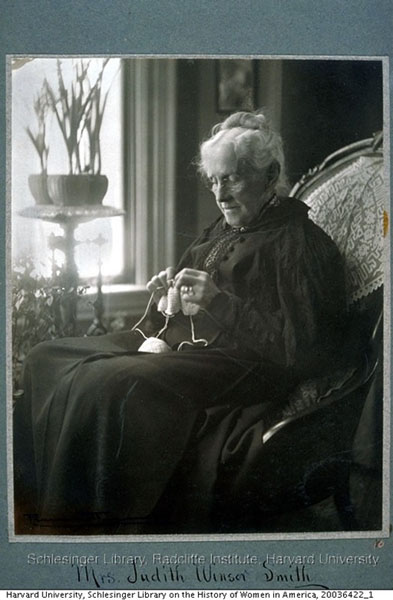 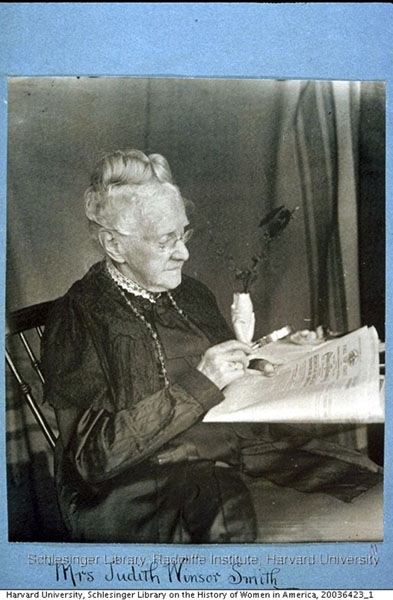 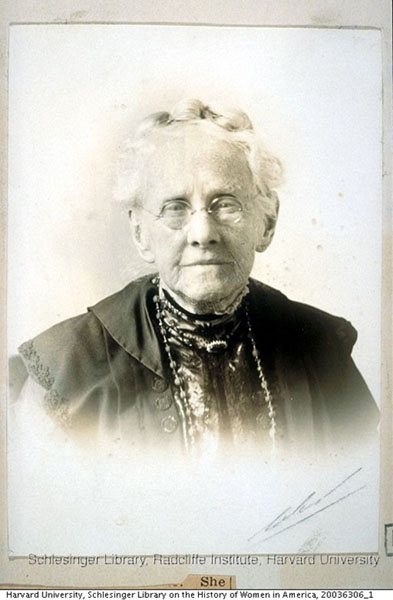