Hazel Hunkins was born on June 6, 1890 in Aspen, Colorado to Civil War veteran Lewis Hunkins and his wife Anne Whittingham. They soon moved to Billings, Montana, where she was the valedictorian of of her class at Billings High School and active in both debate and basketball. After her 1913 degree in chemistry at Vassar College, she studied it further and was a student research assistant and teacher at the University of Missouri. She dreamed of becoming a practicing chemist, but no company would hire her because she was a woman. She thereafter became a dedicated feminist in order to remove those barriers of discrimination from her and other women. After she had taught high school in Montana for a year, Alice Paul convinced her to travel the country to campaign for the vote and against Wilson. Hallinan did just that in 1916, and subsequently Hunkins organized for the National Woman's Party for three years by assisting state organizers and acting as secretary.

Because of her strong beliefs, she was one of the first to volunteer to picket the White House, and she chained herself to its gate in 1917. Those days were "Hell," though, she would write, because of the cold weather and bad company of counter-protesters who would yell rude comments and tear their banners. Despite these setbacks, she remained determined for the cause, sharing with her mother the same year that "If there is any thing that can make me boil it is to be told by some great big fat pompous slobby dirty dishonest politician that women weren't capable of voting correctly and in the same breath say with a smirk that he'd do anything for the ladies." Due to her militant involvement, she was arrested several times, including in August, 1918, when she was sentenced to 15 days in jail for participating in the Lafayette Square protest. The authorities arrested the suffrage pickets, even though it was the counter-protesters who were being raucous and destroying their signs.

In 1920 she married Charles Tompkins Hallinan, moved to London, and had four children. She continued to work though, acting as an industrial investigator for the National War Labor Board and an investigator for the Railway Brothers and Amalgamated Clothing Workers in London. She still also participated in furthering women's equality as the American Women's Club executive secretary for four years and through writing various articles, eventually publishing a collection of essays titled In Her Own Right. She was also active in writing the "London Letter" column of the Chicago Tribune as their foreign correspondent from 1926 to 1942 and founding the Vassar Club of London. Moving back to the United States, she worked as an economic analyst for the Foreign Economic Administration in Washington, D.C. and then was promoted to work as an economic analyst in diplomatic services to the United States as part of the U.S. Department of State in both D.C. and London. Following her deputy directorship of England's Fulbright Commission, she "retired" to become the chairman of Six Point Group, which worked for equal rights for women and when she joined was fighting for female jurors. She even attended the World Congress of Women in Moscow in 1963, and after her husband died, she continued to work with Parliament to try to get bills passed that would help women.

In 1977, Hazel Hunkins Hallinan met with President Carter, and he gifted her the pen with which he signed a Woman's Equality Day Proclamation which reiterated his support of the Equal Rights Amendment. Carter's assistant complimented her effort, lauding, "Mrs. Hallinan stands to be admired by our entire nation. Her willingness to speak out for basic equality has gone unrecognized for too many years." In the years following, there was question as to whether she might be the last living suffragist, to which she replied, "I don't know if I'm the last-But if I'm not the last, I'm certainly the noisiest." She continued to make noise for women's rights up until her death on May 17, 1982.

Sources for this sketch come from the Hazel Hunkins folder in Box 38 of the Vassar College Alumnae/i Biographical Files (AAVC), located in the Archives and Special Collections Library of Vassar College Libraries in Poughkeepsie, NY. This collection included newspaper clippings mentioning her work, letters she wrote to Vassar College to update their records on her life, and multiple Vassar College alumnae questionnaires. A letter she wrote to her mother on March 30, 1917 is also located in the Montana Historical Society's collection curated by Ruth Ferris entitled "Hazel Hunkins, Billings Suffragist: A Primary Source Investigation," accessed online at https://mhs.mt.gov/education/Women/HHLessonPlanFinal2.pdf Biographical information was also found in Doris Stevens's Jailed for Freedom (1920), accessed online at http://chswg.binghamton.edu/WASM-US/crowdsourcing/Stevens_JailedForFreedom_Appendix4.pdf. 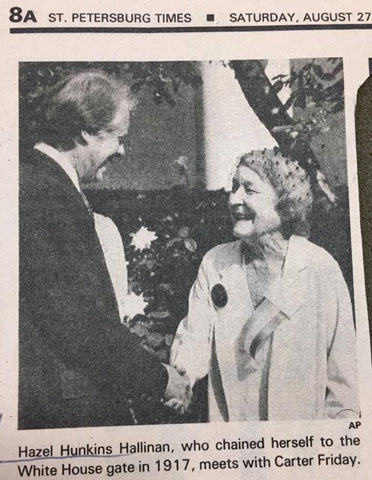 Hazel Hunkins Hallinan's senior-year yearbook entry, including photo and comedic drawing paying homage to her hometown in Montana, from the 1913 Vassarion, located in Vassar College Libraries.