Florence Brewer was born on October 20, 1885 in Trenton, New Jersey to Albert Brewer and Anna Muirheid Brewer. Following her education at Gerrish Preparatory School in New York City, she attended Vassar College as part of the class of 1908; she majored in English and was actively involved in writing for and editing the school newspaper. After graduation, she traveled to France and Germany, and then came back to the Hudson Valley as a Special Investigator for the Poughkeepsie City Schools, writing the Study of Occupations Open to Young Women (1911). She then began her prolific writing career, first as feature and editorial writer for the Poughkeepsie News-Press, then as editorial writer for Vogue Magazine and feature writer for the Baltimore Sun. She married fellow journalist Richard Boeckel in 1916 and had two children, but that did not lessen her passion for writing and social justice.

She vigorously promoted women’s suffrage as a member of the National Council of Women, the publicity director for the National Woman’s Party, the editor of The Suffragist, and a founding member of the National Women’s Press Club in 1919. When asked in a Vassar alumnae questionnaire in 1919 if she did any war work, she answered, “None unless work for the extension of democracy to women is considered part of our program–as it usually was, not except by President Wilson.” After the Nineteenth Amendment was ratified, she worked toward her other passion, preventing war. She was the education director at the National Council for the Prevention of War since its founding and worked and wrote on Council’s behalf for 40 years. Some of the publications she authored include Through the Gateway (1920), Across Borderlines (1926), Between War and Peace: A Handbook for Peace Workers (1928), and The Turn Toward Peace & Why Wars Must Cease, among many other articles and pamphlets. In 1936 she was the American delegate to the 1936 World Peace Conference in Brussels, and she also lobbied the Republican Party to stay out of the second World War. When she died on October 16, 1965 at the age of 79, the Washington Post rightly crowned her the “crusader for woman suffrage.”

Sources for this sketch are found in the Florence Brewer folder in Box 26 of the Vassar College Alumnae/i Biographical Files (AAVC), located in the Archives and Special Collections Library of Vassar College Libraries in Poughkeepsie, NY. The sources included obituaries from The Washington Post and The Poughkeepsie Journal, both published on October 17, 1965, along with pamphlets promoting her books and various Vassar College alumnae questionnaires.

Senior-year yearbook photo and quote in the 1908 Vassarion, found in Vassar College Libraries. 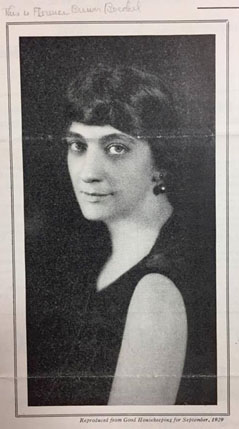 Portrait from pamphlet trying to sell her book Between War and Peace: A Handbook for Peace Workers (1928), which was reproduced from the September, 1929 edition of Good Housekeeping, located in the Florence Brewer folder of the AAVC files. 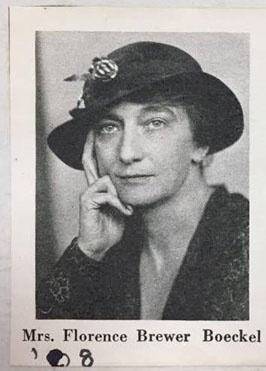 Portrait of Florence Brewer Boeckel from clipping of the National Council for the Prevention of War, Peace Action in November 1934, found in Florence Brewer folder of AAVC files.