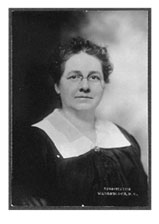 Fellows was an active member of the National Woman's Party, as well as a major advocate for the legalization of women's suffrage. Not only was she a major advocate of the right for women to vote, she also became one of the main leaders of the movement on a national level. In 1920, Fellows was the chairman of the South Dakota division of the National Woman's Party. Before becoming the chairman of the South Dakota National Women's Party, Fellows participated within the party's efforts to secure suffrage for women.

Between the years of 1897 and 1901, the South Dakota suffragists experienced a series of defeats trying to pass an amendment for women to vote. These defeats resulted in 8 years of organizing and behind the scenes work towards constructing and proposing another attempt to pass an amendment for women's suffrage in South Dakota. In 1909, another attempt occurred to pass an amendment; however, it lost by a 35,296 to 57,709 vote. The following five years yielded four more failed attempts to win suffrage; however, the suffragists gradually narrowed the margin of defeat.

Shortly after their defeat in 1914, the organization began to receive financial aid and moral support from the National American Woman Suffrage Association. This help provided $7,500 dollars towards the campaign efforts; as well as, highly influential speakers and organizers. Fellows became the head of the South Dakota National Woman's Party in 1917, and in 1920, she conducted a series of interviews with National Republican Committeemen who agreed to fight for the Women's Suffrage Amendment. As a result, copies of the proposed amendment were sent to the governors of state governors as well as the Chairman of the Republican National Committee, Will H. Hays. These efforts took place throughout a majority of the states, and on August 18, 1920, the 19th Amendment was ratified, finally allowing women to vote nationwide. Fellows was the one of the final driving forces towards woman's suffrage in South Dakota, as well as the entire nation.

Fellows is buried at Mount Pleasant Cemetery in Sioux Falls, South Dakota with her husband and 3 children. She may be gone; however, the legacy that she left in South Dakota and the entire nation will live on forever.