Minnie Hennesy was born in Hartford, CT in 1872. After growing up and marrying Henry Hennesy in 1890, Minnie became a self-sufficient business woman. In the year 1917, she joined the National Woman's Party-led picketing campaign at the White House gates. On October 6, Hennesy joined 32 other women, including Alice Paul, to gain presidential support for a federal suffrage amendment. Even though Hennesy was arrested that day for picketing, her sentence was suspended. She was then arrested again two days later for picketing and was sentenced to six months in the Occoquan Workhouse. 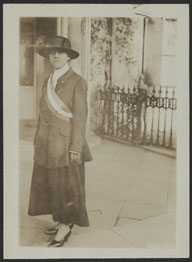 The harsh treatment of suffragists at the Occoquan Workhouse eventually resulted in their transfer to the District of Columbia Jail in early November. Only a few weeks later all were released. 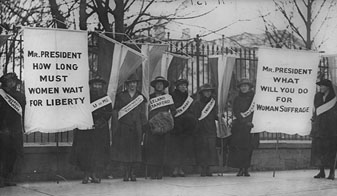 Then in 1918, the Bridgeport Times published an article calling on Congress to look into the arrests of the picketers at the White House. The women who were arrested were now pushing for a Congressional investigation of the circumstances of their arrests. They argued that the conduct of the pickets was not against the law and there was no reason for the women to get arrested in the first place. In the article, the writer notes, "Some of the picket prisoners have already entered suits for damages for false imprisonment." The arrests of the suffrage pickets were judged illegal in 1918. The scandal created by the women imprisoned for legal picketing helped gain support for a suffrage amendment to the U.S. Constitution, which finally became law on August 26, 1920. We have the women of the National Woman's Party and many other people to thank for women having the right to vote today.

Harris & Ewing, Washington, D.C. [Miss Minnie Hennessy, of Ct. Connecticut, sentenced to six months at Occoquan Workhouse for picketing with a suffrage banner at the gates of the White House]. Connecticut United States, 1913. [to 1918 Oct] Photograph. Retrieved from the Library of Congress, https://www.loc.gov/item/mnwp000398/. (Accessed April 11, 2017.)