Born on October 20, 1871 in Massachusetts, Katharine Rolston Fisher, (aka Katharine Ward Fisher) was the daughter of Francis D. Fisher and Sarah E. Fisher (née Dix). She was the great-granddaughter of Revolutionary War Major General Artemas Ward, whose house in Shrewsbury exists as a museum to this day. Apparently never married and without children, Rolston Fisher passed away in her home state on January 1, 1950.

Katharine Rolston Fisher worked variously as a bibliographer, writer, and clerk. Between 1898 and 1900, she contributed articles to the Boston publication The Congregationalist. 1901 saw the publication of Elements of the Theory and Practice of Cookery: A Textbook of Household Science for Use in School, coauthored with Mary E. Williams.

On July 9, 1902, the New York World reported on a suicide attempt by Katharine Rolston Fisher, whom the newspaper identified as the librarian of the Manhattan-based Charity Organization Society. Friends and family interviewed by the paper expressed puzzlement about her leap from a Brooklyn bound ferry, noting that the twenty-five-year-old was in good health and had not suffered any romantic disappointments. She was living in California in 1909, but by 1911 she had returned to Brooklyn, N.Y.

Rolston Fisher's involvement with the suffragist movement can be traced at least to 1915 when the Evening Star (Washington, D.C.) reported that "Miss Katharine Rolston Fisher of California, a woman voter" had been brought on by Lucy Burns as an assistant editor for The Suffragist. A year later, according to the Washington Herald, she was elected recording secretary of the Washington DC branch of the Congressional Union for Woman Suffrage. For the April 1, 1916 issue of The Suffragist, Rolston Fisher penned an article supporting the strategy of asking women in those states that had granted women the franchise to use their electoral power to elect proponents of federal action. She also was part of the Congressional Union's delegation to the Republican National Convention in Chicago in June 1916. In spring of 1917, Rolston Fisher participated in calls on congressmen to lobby for suffrage.

The September 22, 1917 issue of The Suffragist features a photo of Rolston Fisher holding an empty pole after the banner she and another picketer had been holding had been torn away by a group of sailors. The picket in question on September 13, 1917 had also resulted in Rolston Fisher's arrest. Along with five other demonstrators, she received a sentence of thirty days in the workhouse at Occoquan.

Rolston Fisher played an important role in publicizing the poor treatment of prisoners in the workhouse; while still in prison, she began to spread word of rotten food, proximity to prisoners with infectious diseases, pressure to perform manual labor while undernourished, withholding of mail, and denial of visits with counsel. As she would write in "From the Log of a Suffrage Picket," "We learned what it is to live under one-man law. The doctor's orders for our milk and toast and even for our medicines were countermanded by the superintendent, so we were told." Based on her time in Occoquan, Rolston Fisher also penned the poem "The Empty Cup" describing the harsh treatment of suffragist leader Lucy Burns.

The US Census of 1920 placed Rolston Fisher in residence at the 'Suffragist House' (NWP headquarters) at 14 Jackson Place, Washington, D.C. and listed her profession as a government clerk. According to Doris Stevens, she worked at the U.S. War Risk Bureau. In or around 1923, she wrote a pamphlet "Lucretia and Elizabeth, London 1840-Seneca Falls 1848," a copy of which can be found in the Library of Congress Special Collections. Rolston Fisher continued to reside in Washington, D.C. for the next twenty odd years while working variously as an author and bibliographer. 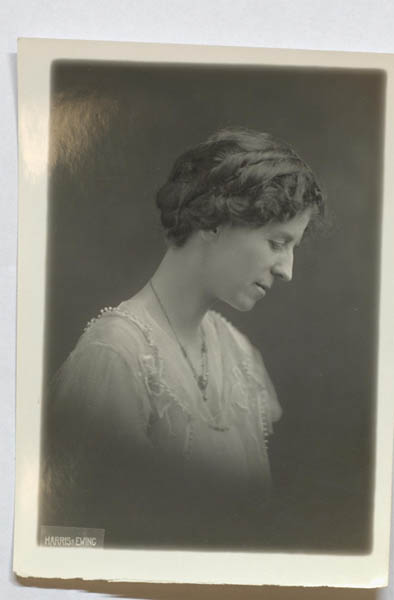