By James Clarke, undergraduate, University of North Carolina at Greensboro

Annie Wells Cannon was born on December 7, 1859 in Salt Lake City, Utah. She spent her life as a Utah-based newspaper editor, suffragist and politician who dedicated a great deal of her time to the woman’s suffrage movement. Wells was raised a member of the Church of Jesus Christ of Latter-day Saints, and displayed great dedication to her studies of scripture and literature during her childhood. At age twenty she married John Quayle Cannon, a fellow member of the Mormon Church and a career military man. Their marriage lasted until John Cannon’s death in 1931.

Beginning in 1877, Cannon and her mother, Emmeline B. Wells, presided as editors for the Woman’s Exponent, a pro-suffrage newspaper that also served as a local news outlet, and evangelizing platform for the Mormon Church. Cannon held positions as a reporter and assistant editor. Some of her writing focused on local issues, such as the negative impact of out-of-state teachers on the culture of Utah’s schools. In her religious writings she called obedience to God, the “highest virtue, that every citizen should be taught and live by.” And her article, “Suffrage No Failure in Utah,” she expressed pride in her state for having laws that defended the property and legal rights of women and helped protect them from destruction of property by their husbands. Cannon also counted the nine-hour work day law as a triumph for woman’s rights in Utah.

During the Spanish-American War of 1898 Cannon became involved with the Utah Red Cross, when her mother organized 100 Utah women to provide care packages and food to American soldiers in the conflict. Cannon’s involvement in the Red Cross continued into the First World War, where she acted as head of local Utah chapters, overseeing their efforts to alleviate the destructive impact of the conflict. Her duties included overseeing the appropriate use of Red Cross funds, determining the kind of materials that would be sent out, and presiding over local Red Cross events.

Over time, Cannon became increasingly committed to the cause of woman’s suffrage, a position evident in her newspaper writings. Her earliest articles portrayed suffrage as a responsibility that women needed to earn. One 1895 piece directly addressed her opponents: “I have never seen an argument against woman suffrage that was not flimsy,” she wrote. Another article Cannon wrote with her mother for the Woman’s Tribune in 1891 urged women to study politics, and learn about their rights. Cannon argued that through cohesion, sensible oration, and most of all a working knowledge of the political systems they wanted to enter, American women would earn the right to vote.

Cannon saw the rise of militant suffragists a huge risk to the movement. The militants seemed to go against everything she stood for. Cannon referred to the traditional camp as suffragists, and the militant camp as Suffragettes. She described the suffragists as, “that notable body of women who have firmly but quietly and decisively carried on an education campaign for the right of franchise; a noble and notable army of women.” The suffragettes were “a militant organization of women who endeavor to gain the right of franchise through force rather than education, through demand rather than persuasion; claiming that . . . (the rights of women) needs no argument.” She expressed disdain that the suffragettes, “destroy property . . . and incite to panic and riot.” Her newspaper also published several articles that criticized the burning of churches and assault of policemen Suffragettes carried out in England.

Cannon believed that suffragettes sought to supplant men by adopting masculine attributes instead of responsibility. She described a suffragette that she encountered during a 1906 convention as someone who found more pride in “the amazonian army of militant sisterhood” than of Joan of Arc. By contrast, Cannon believed that “a woman should supplement not substitute a man.” While the Woman’s Exponent devoted significant coverage to the militants’ campaigns, Cannon believed many Utah woman would find their efforts distasteful and hoped they would choose to work with Suffragists instead. Despite being one of the longest running journals in Utah, in 1914 Women’s Exponent closed its doors because the Relief Society, an outcropping of the Mormon church that funded literature related to the church, ceased funding the paper.

As Cannon finished her work with the Women’s Exponent, she entered the realm of politics. In 1913, she successfully ran for the Utah House of Representatives as a member of the Republican Party. She served one term before leaving office in 1915. Cannon participated in the Women Voters' Convention held by the Congressional Union for Woman Suffrage in San Francisco in September 1915. Annie Wells Cannon died September 2, 1942, age eighty two. She died in Salt Lake City, having called it home her entire life. 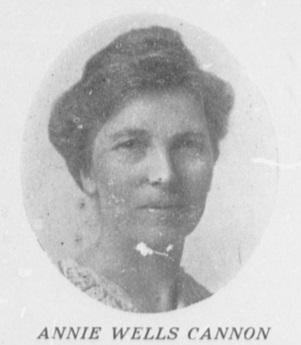 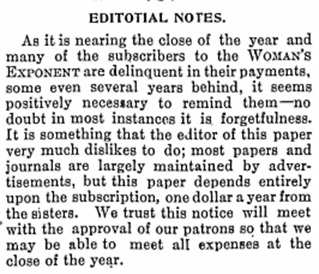 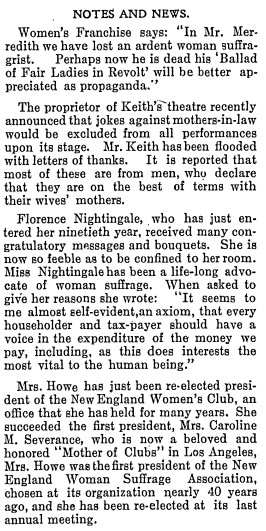 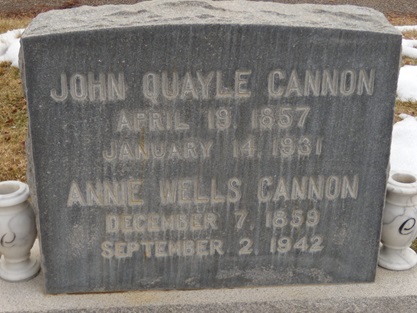