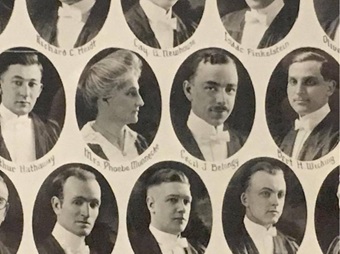 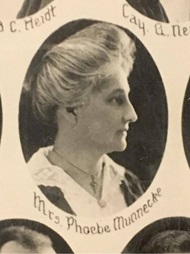 In the late 1910s the Munneckes moved to Detroit, Michigan. In 1918 Mrs. Munnecke traveled to Washington, D.C. to assist the National Woman's Party (NWP) in their campaign to win the right to vote. She participated in the militant protests outside the White House that became known as the "watchfire demonstrations." On Saturday, January 4, 1919, Mrs. Munnecke helped to burn a copy of a speech that President Wilson delivered on the topic of liberty. The fire they lit cracked the paving stones in front of the White House. Mrs. Munnecke and five others, including Alice Paul, were arrested and charged with "injury to government property." They were released on bail later that day.

Unfazed, the protestors returned to the White House the following day. On Sunday, January 5, Munnecke, Julia Emory, Mary Dubrow, and Annie Arniel started a second fire. They burned a second speech that Wilson delivered on the topic of liberty. All four refused to pay the assessed fines and so were sent to jail and began hunger strikes to protest their imprisonment. Munnecke received one of the longest sentences of 10 days in jail. Upon entering jail, she claimed that the stories she heard "did not begin to equal the actual horrors of the district prison." The jail conditions seriously affected her health and caused officials to commute her sentence before the 10 days were through. Later that month, at the court date of fellow picketer Mary Nolan, Mrs. Munnecke and 12 others loudly applauded the defiant speech that Nolan delivered to the judge. All 13 applauders were tried immediately for contempt of court, found guilty, and spent 48 hours in jail.

After the second jail sentence, Mrs. Munnecke returned to Detroit and helped to run a small business with her husband and another family. She studied law and obtained her LL.B. degree from the Detroit College of Law in 1922. She was a charter member of the Women Lawyers Association of Michigan and used her skills as a lawyer to aid the National Woman's Party, including helping to organize the Women Lawyer's Conference on November 12, 1922. Mrs. Munnecke remained dedicated to the NWP throughout her life. She was elected chair of the Michigan branch of NWP in 1941 and was very involved in the campaign for the Equal Rights Amendment (ERA). In 1942 she helped to lobby the Republican Party at its national convention in Chicago, successfully influencing the platform committee and the convention delegates to approve an ERA plank for the second time.

Mrs. Munnecke was involved in various other issues and organizations throughout her life. In 1927 she was a member of the anti-war organization Michigan Council for World Peace. She was president of the Women Lawyers Association of Michigan in the late '30s. She also was director of the Detroit Federation of Women's Clubs and a member of the Women's City Club of Detroit. In 1943 she was elected chair of the international relations committee of the Detroit Business Women's Club. Mrs. Munnecke also served as a mentor to the next generation of feminists, such as the longtime Michigan politician Martha Griffiths.

In 1950 Phoebe C. Munnecke was recognized as Soroptimist Woman of the Year because of her lifelong commitment to the "economic advancement of women" and her efforts "in helping to advance so many women in public life." She also became the Life Membership Chairman for the National Association of Women Lawyers and obtained over seventy-five memberships for this organization. She died on November 13, 1955, at her home, 8100 East Jefferson, Detroit, where she had resided for over thirty-five years.

Mrs. Phoebe Munnecke's activities and political projects are referenced numerous times in the Women Lawyers' Journal, which published an extensive obituary of her in 1956. She is also included in the history of the Women Lawyers Association of Michigan on their official website at https://womenlawyers.org/new/. Descriptions of her organizing efforts are found in articles in the New York Age, the Detroit Free Press, and the Chicago Daily Tribune. Finally, the context for her arrests and the details of the tumultuous days of January 1919 are described in detail in Linda G. Ford, Iron-Jawed Angels; Jayne Morris-Crowther, The Political Activities of Detroit Clubwomen in the 1920s; Inez Haynes Gillmore, The Story of the Woman's Party, and Doris Stevens, Jailed for Freedom.