Annie Arniel was one of the most dedicated, energetic, feisty, and self-sacrificing members of the Delaware chapter of the National Woman's Party (NWP). She became its most tragic figure. Along with Mabel Vernon, Florence Bayard Hilles, and other Delaware suffragists, she participated in White House picketing and watchfire protests; she was arrested—eight times—and sentenced to local jails. All told, Annie Arniel served 103 days, including 60 in the Occoquan workhouse in Virginia. Despite being "broken in health," after her Occoquan stint in 1917, she returned to militant activism again and again. In 1924, after suffering health problems that one report described as a "nervous breakdown" and that required hospitalization under a physician's care, she wrote a farewell note to her daughter, Rebecca Arniel, and committed suicide. Her death certificate gave the cause of death as "asphyxiated by illuminating gas."

Born to Thomas J. Melvin and Margaret C. Morris in May 1869 in Harrington, Kent County, Delaware, Anna Leah Melvin was the youngest of their eight known children. In 1891, she married George Arniel [or Arneil], a Canadian of Irish extraction. A son, Thomas, was born to the couple within the year but he died from diphtheria in 1897 at the age of six. The Arniel family appears to have had close ties to Annie's brothers, Thomas, James, and Jacob, and her sister Mamie Clinton; not only did all the men work either on the railroad or in the building trades, but the 1900 and 1910 censuses found the Arniels, Melvins, and Clintons all living within short distances of each other on Wilmington's east side. George Arniel worked as a "special officer" and watchman, then as a detective, with a Wilmington railroad company. His sudden death at age 40 in June 1910 left Annie, who was pregnant, to care for their eleven-year-old daughter Rebecca. Their son, Melvin Morris Arniel, was born and died on December 21, 1910.

Records of Annie Arniel's suffrage activism begin in March, 1914, when she hosted one of two "parlor meetings" held in Wilmington. By May, she and her daughter Rebecca were among a group of Delawareans participating in a Washington, D.C., suffrage parade and mass meeting. In October, the Delaware Equal Suffrage Association, an affiliate of the National American Woman Suffrage Association (NAWSA), elected her to serve as a delegate to the organization's annual convention. In 1915, she gave her allegiance to the Congressional Union (CU), serving as Executive Secretary of the group's Delaware branch, for which Florence Bayard Hilles served as chairman. Along with co-workers such as Annie McGee, she spoke at open air meetings in Wilmington; in the summer of 1915, she managed the CU office in Mabel Vernon's absence. When the Congressional Union formed the National Woman's Party (NWP), Annie Arniel was already a dedicated activist. In December, 1916, she represented Delaware at the CU's march and memorial service for Inez Milholland in Washington, D.C.

Soon, in January 1917, she was picketing the White House, leading to her arrest in June for obstructing traffic, among one of the first groups to be so treated. Convicted, she served three days in the District of Columbia jail. She was re-arrested in July as a "silent sentinel," and again in September during the "draft day" protests. The September arrest led to a sixty-day sentence in the Occoquan workhouse. Released in November, she returned to Wilmington "broken in health," as a local newspaper recounted. "Under the prison regime and on prison rations," she told the newspaper, "I became so weak that for the first time in my life I fainted." Taken to a hospital, she "insisted upon returning to my companions." In Wilmington, she was celebrated at a reception at Josephine Anderson du Pont's house.

During the winter of 1917-1918, she "went to work in the Bethlehem Steel [munitions] plant in Wilmington because I desired to help my country" with the war effort. There, Annie Arniel, Florence Bayard Hilles and other local women filled war jobs. "We were good enough to work in the steel plant and help load shells for the battle-fields of France but we still are not good enough to vote," she told a local reporter.

In August 1918, she joined several other Delaware women, including Mary E. Brown, and co-workers at the munitions factory, Annie McGee [Magee], Adelina Piunti, and Catherine Boyle, in a demonstration in Lafayette Square. All five were arrested. While they waited to learn their fate, Annie Arniel "improvised a musical instrument out of a hair comb and a piece of paper" and led the group in singing. Yet another arrest occurred when she took part in the New Year's Day, 1919, watchfire protest.

Once the House of Representatives had passed the Nineteenth Amendment, Arniel turned her energies toward securing Senate passage and then ratification. She lobbied Delaware's governor, a suffrage supporter, in Dover and in August, 1919, took part in a "Suffragists' Canterbury Tales" at the Majestic Theatre in Wilmington, offering the "taxpayers' tale." In an unusual move for Delaware, a segregated state, Alice C. Baldwin, a teacher at Howard High School, the state's only four-year high school for black students, and member of Wilmington's Equal Suffrage Study Club and its NAACP branch, provided the "colored woman's tale."

After suffrage, Annie Arniel became chairman of the Republican Women's League, helping disseminate information on registering and voting, and remained an active member of the NWP. In February, 1921, she was part of Delaware's delegation, along with Annie McGee, Mary E. Brown, Florence Bayard Hilles, Josephine du Pont, and Naomi Barrett to a three-day NWP conference in Washington, D.C., and the unveiling of a statue honoring suffrage pioneers.

At the age of 54 Annie committed suicide 9 February 1924 by inhaling illuminating gas. At her death, she left a note signed "Goodbye, daughter." Addressed to Rebecca, who was studying in Philadelphia to become a nurse, it left her the contents of a bank account. The August 1923 issue of Equal Rights recorded Annie Arniel's final contribution to the National Woman's Party: $1.

Information on the Melvin, Arniel, and Clinton families can be traced through Ancestry.com and FamilySearch.org; the latter has a scanned copy of her death certificate from the Delaware Public Archives.

Issues of The Suffragist and Equal Rights, both available through the Gerritsen Collection: Women's History Online.

The following newspaper articles provide crucial details about her activities and her life:

"Woman's Party Plans Meeting Tomorrow: It Will be Held in the Majestic Theatre and Will be Addressed by Pickets and Others," Wilmington, Delaware Every Evening, August 2, 1919, 2.

There are photographs of Annie Arniel, including a portrait photo that accompanied a November 11, 1917 newspaper article, at this web site which, unfortunately, includes links to erroneous information:
http://www.angelfire.com/space/kingstonroots/Menard/AnnieArniel.html 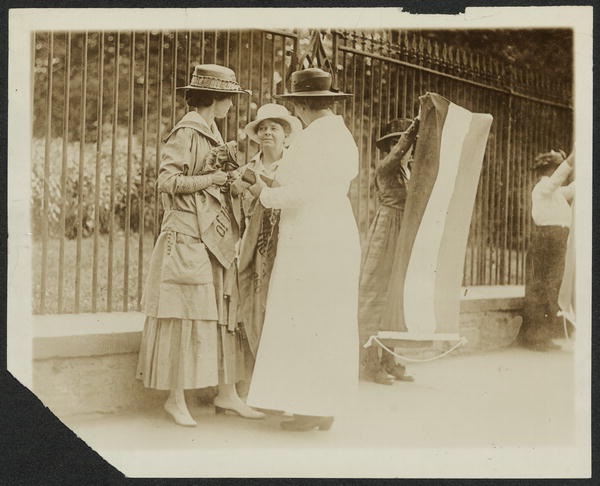 A policewoman arrests Florence Youmans of Minnesota & Annie Arniel (center) of Delaware for refusing to give up their banner [June 1917]
Library of Congress, National Woman's Party Photographs: https://www.loc.gov/resource/mnwp.147006

Photo of some of Delaware's suffragists, taken at the Wilmington railroad station on May 9, 1914; the group traveled to Washington, D.C., for a large suffrage parade. 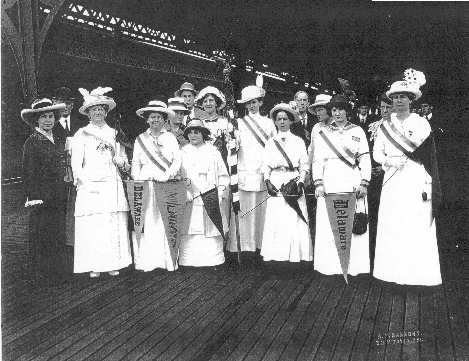 Davis and the original newspaper caption identify the individuals as: