Anna Campbell Kelton grew up in a military family; her father was noted Civil War Brigadier General John Cunningham Kelton. She earned a Bachelor of Science degree from the Columbian College of George Washington University in 1897, where she won a physics prize. After studying library science, she worked for the Department of Agriculture, and later the Copyright Office of the Library of Congress. The chief chemist at the Department of Agriculture was the famed consumer advocate Dr. Harvey Washington Wiley, whose significant legacy included lobbying for the Pure Food Act of 1906 (aka the "Wiley Act"), founding the Food and Drug Administration (FDA), and establishing the Good Housekeeping Seal of Approval. There was even a U.S. stamp in his honor. Esquire notes the humor of an aging, confirmed bachelor who had a history of saying misogynistic things, such as insisting that women and men did not have the same brain capacities, being attracted to a feminist firebrand. She was a college graduate, already an outspoken suffragist, and exactly half his age. Nevertheless they married in 1911 when she was 33 and he was almost 67, going on to have what seems to have been a happy marriage with him fully supporting her activism. She called him "fearless," and quoted him as saying, “I have fought all my life for a principle. If it is your conscience to go, I will not stand in your way." They had two sons.

Anna Kelton Wiley was a member and often president or senior board member of more than forty organizations, many of which are documented in her voluminous papers. She served two terms as chairman of the National Woman's Party in the early 1930s and 1940s and edited its periodical Equal Rights for five years. She and her husband were fixtures of 20th-century newspapers and magazines. Yet when asked to give her profession in interviews, she would simply respond, "Housekeeper." When considering her greatest accomplishments, she often pointed to the time of her arrest on November 10, 1917 for "obstructing traffic" while picketing the White House. Tried and convicted, she chose jail over the assessed fine and spent 15 days in district jail. "Woodrow Wilson didn't believe in suffrage," she told syndicated columnist Gene Handsaker in 1959, when she was 82 and the oldest delegate to the General Federation of Women's Clubs convention. In 1918 she wrote of the irony of a country at war to secure the freedom of others while denying its own women full enfranchisement: "[T]wo hundred and eighteen women have been arrested, and ninety-one have served jail sentences. Of the hardships and cruelty imposed upon us in jail it is not my purpose to speak. Suffice it to say that the untenable position of imprisoning women for demanding democracy at home, while sacrificing precious lives in securing democracy abroad, could be endured no longer."

After her husband died in 1930 she was a widow for 34 years. As an extension of her feminism and her habit of putting politics into action, she shared her Washington home with two German refugee women, and she remained active in political life until four years before her death. She is buried with her husband at Arlington National Cemetery.

The best photo of her is from the Good Housekeeping article: 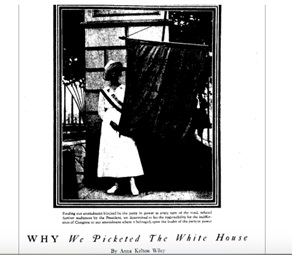 Anna Kelton Wiley papers in the Library of Congress: http://hdl.loc.gov/loc.mss/eadmss.ms013080