Ethel McClintock was born August 26, 1878 in Meadville, PA. She married Robert E. Lee Adamson on December 10, 1902 at the Trinity Church in Manhattan. Her husband was the 9th fire commissioner of New York City.

Adamson was a prominent member of the National Advisory Council of the Congressional Union for Woman Suffrage. She regularly wrote Alice Paul or Lucy Burns about suffrage sentiment in New York City. On April 9, 1916, Ethel Adamson spoke at a luncheon in Washington, D.C. honoring and bidding farewell to Congressional Union members who were going to embark on a campaign in western United States to gather support for a federal suffrage amendment for women. She disapproved of the NWP picketing in 1917. However, she acknowledged its value after the House passed the suffrage amendment; "We all know WHO PASSED THE FEDERAL AMENDMENT," she wrote. "It was little Alice Paul."

Ethel Adamson supported women and suffrage all of her life. She passed away on June 3, 1949 and her final resting place is beside her husband at the Rock Baptist Church Cemetery in Clayton County, Georgia.

Adamson remained active in the NWP until her death. In 1934, she headed a committee the Susan B. Anthony Memorial Committee, established to honor Anthony's achievements. The committee's first effort, to advocate for a 1935 commemorative stamp, proved futile. to commemorate Susan B. Anthony through a United States postage stamp. In 1935, the committee began holding memorial pageants in Washington DC and New York City on February 15, Anthony's birth date. The pageants continued into the 1940s. 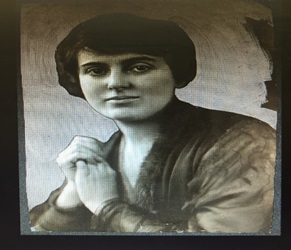