Pauline Clarke was born September 8, 1887. She attended Bryn Mawr College, the first women’s college to allow students the opportunity to acquire a Ph.D. During her senior year, Clarke served as president of the chapter of the National College Equal Suffrage League (NCESL). The purpose of NCESL was to recruit college-educated women to the suffrage cause. Pauline Clarke also co-edited and reported for the National Woman’s Party’s The Suffragist from March 1917 to February 1918.

Active in the National Woman’s Party from 1916 to 1920, the first time Clarke was arrested for marching to the White House fences and unfurling suffragist banners alongside other suffragists at the White House was June 26, 1917. The women were charged with obstructing traffic and were released on personal bonds. During Clarke’s trial, she said, “No lawyer defended the women, but they spoke in their own behalf, defending themselves on the ground of the constitutional right of free assemblage and appealed to the government for redress of grievances.”[1] Clarke was one of twelve women arrested for protesting across from the White House on August 6, 1918 in Lafayette Park. They were charged with obstruction of traffic. Clarke was only 28 years old at the time.

Clarke married Clinton Gilbert of Washington D.C. and they lived at 122 Connecticut Avenue. Their daughter, Phyllis, was born October 12, 1924 in Chicago, Illinois. Clinton died sometime later leaving Pauline as the head of the household. She passed away at 81 years of age on July 15, 1968. 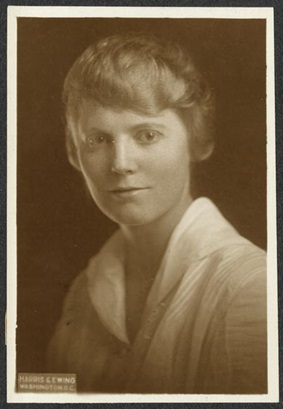