Belle Sheinberg was born October 12, 1895 in Bronx, New York to Russian immigrants, Joseph and Sarah Sheinberg. She had one sister and one brother, both of whom were older than she. She grew up in the Bronx and eventually attended New York University. She graduated on June 7, 1922 from NYU with a Bachelor of Science Degree in Psychology.

During her time as a student she began her involvement with women’s suffrage and became interested in the National Woman’s Party. On November 10, 1917, Sheinberg picketed in front of the White House for the right to vote. She was arrested along with many other women for obstruction of traffic and unlawful assembly. She was found guilty of this charge and, like others, refused to pay the fine. She was sentenced to 30 days in the Occoquan Workhouse in Lorton, Virginia. There she became a victim of abuse by staff on what is now known as “The Night of Terror.” She was imprisoned alongside other picketers such as Lucy Burns and Dorothy Day.

In the accompanying picture Belle is the woman second from the right. This picture was taken before her arrest. During 1932, it was documented that she traveled abroad to Southampton, England. On the passenger list Belle’s name is hyphenated to Sheinberg-Braumont, indicating she may have been married. Her date of death is unknown. 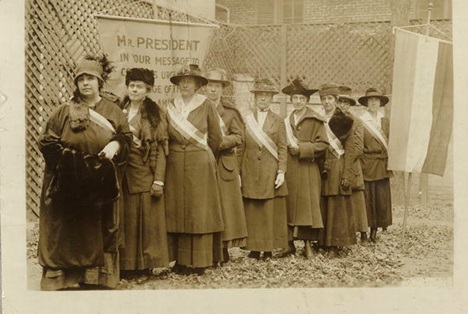