Maud (also spelled Maude) Malone was born in 1877 and was the daughter of Edward and Annie Loyola (Flynn) Malone. She organized the Harlem Equal Rights League in 1905, with headquarters at the Hotel Martha Washington.

She was known for being a loud protester who would shout questions during politicians' speeches. One time she shouted during a meeting at the Brooklyn Academy of Music where Woodrow Wilson was speaking. Malone was convicted and placed in jail for a night. She made it a point to go to every speech given by a presidential candidate in New York City and yell out “what about votes for women?” Malone insisted that if she were disorderly she should be punished and be able to know just what her rights were.

Active in the re-invigoration of the women's suffrage movement that occurred in the first decade of the twentieth century, Malone advocated for the affiliation of library workers with women's organizations and with the working class. She once said, “After all it was less a difference in method that was needed than a difference in attitude. Unless suffrage made for democracy it really meant nothing.”

Malone later resigned the leadership of the band of militant workers in 1908 at a committee meeting for the Progressive Woman Suffrage Union. She felt the original plan was to invite the cooperation of a broad coalition of men and women in the fight for equal rights but instead the union did not hold true to having no prejudice on the basis of race, color, difference in class or political ideology.

“Miss Maud Malone Convicted For Her Heckling of Wilson,” The Evening News (Nov 15 1912). 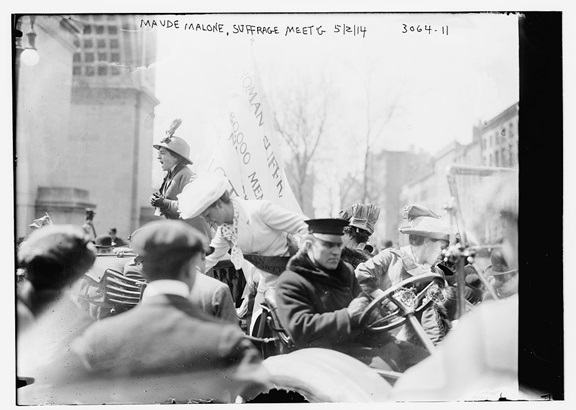