Elizabeth White Colt, also referred to as Elizabeth C. Colt and Mrs. William L. Colt was born in Williamsport, Pennsylvania in 1876 to her father, also born in Pennsylvania and her mother, born in New York. She was the niece of an eminent Philadelphia judge, Judge Dimner Beeber. A 1910 census showed that Colt was married by age 34 and had three children, Robert, Katherine, and Leonard. Robert Nellson was her son from her first husband. It is unknown if her other two children were with her second husband, William L. Colt. In 1910, they resided in William L. Colt’s birthplace, Eastchester, Westchester County, New York with their children. However, most of her suffragist involvement locates her at 7 Maple Street, Bronxville, New York.

In the beginning of her suffragist career, Colt was a member of the Equal Franchise Society and wanted to participate in a “big suffragist demonstration” to the New York Legislature. When the Equal Franchise Society decided not to participate, Colt was extremely displeased and joined the Equality League in order to participate herself. She took part in the demonstration in her own car and sold papers, buttons, and badges advocating for votes for women. She did this again during an automobile parade on 5th Avenue. Colt, and Katherine Duer Mackay sold yellow suffrage flags. Colt continued to take part in suffragist activities and became a prominent member of multiple organizations. On May 6, 1911, she contributed again by making banners and materials for a women’s suffrage parade. In early 1914, Colt joined Alice Paul to organize the Congressional Union for Women’s Suffrage in Washington, D.C. On December 4, 1916, Colt, alongside National Woman's Party members Mrs. Anna Lowenburg, Mabel Vernon, Mrs. John Rogers, and Mrs. Florence Bayard Hilles held a banner while President Woodrow Wilson spoke to the House of Representatives. After the speech was over, they dropped the banner over the balcony railing. On January 26, 1917, Colt, joined the National Woman's Party pickets at the White House with Isabella Mott.

Colt was the New York City Chair and the Chair of a Senatorial District of the Women’s Political Union of New York. Colt was an important member of the Advisory Council of the Congressional Union for Woman Suffrage, later the National Woman's Party. After years of influential and inspiring suffrage work, Elizabeth W. Colt died on Wednesday, July 23, 1919 at age 43 in Bronxville and her body was buried in Conway, Ontario.

“Suffrage Parade Has Police Guard Strong Force Out to Keep Order in the March and Auto Spin Down Fifth Avenue,” New York Times, May 22, 1910, 11; 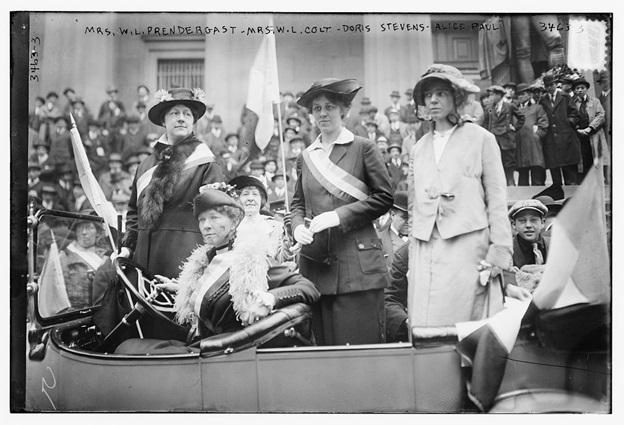