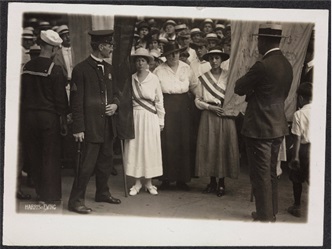 Madeline Watson, of Chicago, was born in Illinois in 1885 according to census listings in 1910 and 1920. She served as the treasurer of the Illinois branch of the National Woman's Party, and was a very active participant in pickets and protests to urge passage of a constitutional amendment for women’s suffrage. She was arrested twice in her life: once, for picketing of the White House, and once for her participation in the Lafayette Square meeting of 1918. The latter of the two was seen as the less severe offense, and she was sentenced to 5 days in a workhouse. However, she is best-known for her earlier picketing the White House, for which she was sentenced to serve 30 days in the Occoquan Workhouse in Lorton, Virginia.

August 11, 1917, saw the first of Madeline Watson’s protests at the White House. During this protest, Watson and three other women carrying two banners reading “Kaiser Wilson” were ambushed by a crowd of hundreds, including government clerks from the State, War, and Navy departments. All four militant suffragists were pinned against the iron fence, initially by the massive crowd and then by police. While they were bruised and suffered other minor injuries in the commotion, no arrests were made on that day. However, less than a week later, on August 17, Watson marched forth with many other women, including Catherine Flanagan, to again picket in front of the White House. The protest began around noon, and, while police were aware of both the picketers and the apparent need to arrest them, they waited until 4 in the afternoon to do so, so that a large crowd of government workers returning home would be able to witness the arrests and sustain the charge of obstructing traffic. At 4 o’clock sharp, the policemen began to arrest the women, though not before some were manhandled by a rapidly growing crowd. While two civilians tried to stop the attacks on the six women, they were arrested along with six of the picketers, including Madeline Watson.

A total of 40 minutes was allotted for the trials of the six picketers, on the charges of obstructing traffic. All argued that they were innocent, and included brief statements advocating for women’s suffrage, but nothing they said had any effect, and all were sentenced to 30 days in Occoquan or a fine of ten dollars. While it was Madeline Watson’s first time being arrested, she took her court sentence without a murmur, and, wanting to make a statement in the case for suffrage, she and the other five all opted for the workhouse.

While in Occoquan, the six women were treated harshly. Senator J. Hamilton Lewis, of Illinois, made a trip to visit Watson and one other Illinois-native arrested with her, and was appalled at their conditions, saying that he had “never seen prisoners so badly treated, either before or after conviction.” They were provided with the worst clothes available and rancid food, to the point where survival was maintained by moldy bread and water. Watson was the one of the few people in the workhouse who was allowed any contact with the outside world, as she was permitted one letter. It is unknown who this letter was from; however, as Watson was the only married women of the group, and also had a 10-year-old child at the time, it is likely that she was permitted the small privilege of a letter because it came from her spouse or young child.

The August 17, 1917 picketing and subsequent arrest of Madeline Watson made nationwide news, being covered in such newspapers as The Arizona Republican, The Butler Weekly Times, The Seattle Star, The Norwich Bulletin, The Topeka State Journal, The New York Tribune, and the Chicago Tribune. The Chicago Sun however, was the most thorough reporter of Madeleine Watson’s activist work, publishing several articles on her actions in the 1910s. All of these newspapers were accessed by myheritage.com, save for the Chicago Tribune which was accessed in the online archives of that publication. Watson's work picketing and her treatment inside Occoquan work house were also briefly spoken about in the book Jailed for Freedom by Doris Stevens. 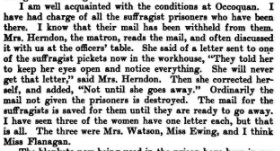 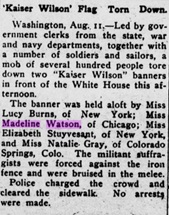 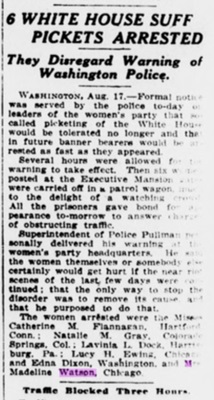 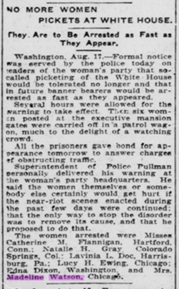 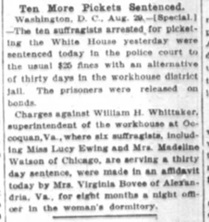 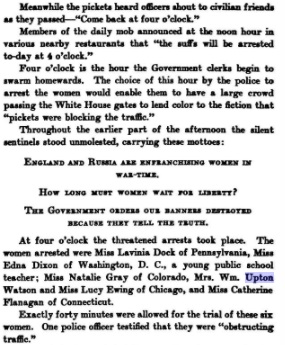 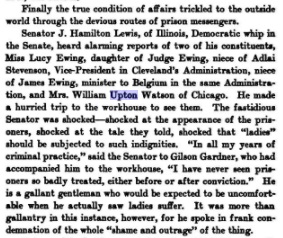 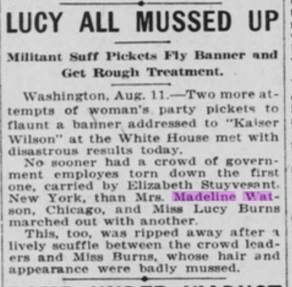 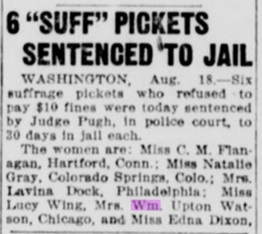