Vera entered Goucher College in 1916, and left in 1918. Although Vera did not graduate Goucher with her fellow students in the class of 1920, she did participate in a momentous event in Goucher’s history. On February 3, 1917, a group of approximately 30 Goucher students journeyed to Washington, D.C. to demand the right to vote. The Congressional Union for Woman Suffrage, founded by Alice Paul in 1913, organized picketing in front of the White House in January of that year. Women picketed the White House and staged other protests until June 1919 when the 19th amendment passed Congress. February 3rd was college day, when suffragist students from thirteen area colleges joined together to picket the White House. Goucher’s delegation of students was the largest.

Though Goucher’s president, William Guth, advised the students not to travel to Washington for the picketing, the women did not allow Guth’s disapproval of their actions or the cold winds stop them from demanding the vote. After the picket, Guth made a speech in front of the entire college and local reporters rebuking the young women who had participated. The popular opinion was that the government should focus on the war crisis rather than women’s suffrage. Vera’s presence at the White House was captured in a photograph of Goucher students published in the evening edition of the Baltimore News on 3 February, 1917. The heading reads, “The Cold Weather Has No Terrors For Them.” The young women were not disheartened by Guth’s backlash. In fact, a February 6, 1917 article in the Baltimore News titled “Mrs. Scott Talks Back,” reported that the students felt inspired and motivated by the picket. The picket, according the article, “strengthened their [ students’] resolve and, furthermore, would encourage others to join the movement.” Mrs. Townsend Scott, the chairman of the Maryland branch of the Congressional Union believed that there was no harm in the picketing and that Guth “made a mountain out of a molehill.”

During her sophomore year at Goucher, Vera became very ill with the Spanish Flu. She withdrew from Goucher in order to be cared for at home. After Vera fully recovered, she began teaching at a public school in her hometown of West Pittston. Between 1920 and 1921, she taught in Wallingford, Pennsylvania, to return again to West Pittston for the school years between 1921 and 1923. She moved up in grade level and taught high school in 1923 and 1924. After five years of teaching, Vera became the first woman principal of the West Pittston Junior High School. She remained in that position for twelve years.

Vera’s education did not come to a halt after her two years at Goucher. During the summers of 1922 and 1923, Vera took classes at Cornell University. In 1924, she enrolled at Penn State College (later Penn State University) where she received her B.A. degree in education in 1928.

In 1935, Vera resigned from her position as principal to move and teach in Silver Spring, Maryland near to where her sister and her children had recently moved. Her education and career were very important to Vera and “she took great satisfaction in it.” Vera was beloved by her students and colleagues. In a letter to Vera after her resignation, the superintendent of the West Pittston school district applauded Vera’s outstanding work throughout her career. Vera assisted in restructuring the junior high school. The superintendent wrote, “Your loyalty and devotion to duty, your efficiency, your progressiveness, your tact in dealing with teachers, pupils, and parents, and above all, your splendid personality has been responsible for this progress.”

On July 3, 1936, Vera married James B. Hughes, a bus driver, who was also originally from West Pittston. The couple married in Washington, D.C. The couple moved to Elizabeth, New Jersey for James’s work. Eventually Vera and James returned to West Pittston where they lived until Vera died in 1975.

Vera is remembered by her family as being “always positive and upbeat, warm and loving. She believed in being independent and in getting out in the world and doing good. She fostered that spirit in her nieces and grandnieces.”

Vera’s work after graduation is catalogued in the Goucher College Alumnae Directory, February 1929 (Special Collections and Archives, Goucher College Library). Information about the picket was found in the Suffragist (Archives, Sewall-Belmont House and Museum), the National Woman’s Party Papers (Library of Congress), the Baltimore News (Enoch Pratt Library), and newspaper clippings from Public Relations Scrapbooks in Special Collections and Archives at Goucher College. Her marriage license can be found on familysearch.org and "District of Columbia Marriages, 1811-1950." The Hughes wedding announcement is from the Wilkes-Barre Times Leader, July 3, 1936. Information on her family and residency was accessed from Ancestry.com and her Individual Alumni Record, Special Collections and Archives, Goucher College Library. Vera’s great-niece, Jean Armstrong Demaree, provided additional information including a copy of the letter from the superintendent and photographs. 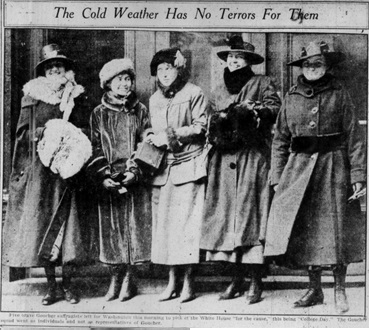 “The Cold Weather Has No Terrors for Them,” Baltimore News, February 3, 1917. The caption reads, “Five brave Goucher suffragists left for Washington this morning to picket the White House ‘for the cause,’ this being ‘College Day.’ The Goucher squad went as individuals and not as representatives of Goucher.” Though the Goucher students are unidentified individually, a 1984 letter written by Christina Flint suggests that the women are Elizabeth Watters, Christina Flint, Miriam Eggleston, Lucy Graves, and Vera Armstrong. Flint’s letter can be found in her Alumni Individual Record, Special Collections and Archives, Goucher College Library. 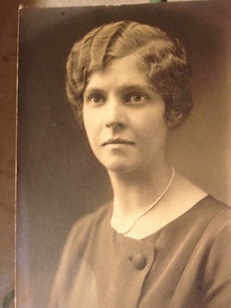 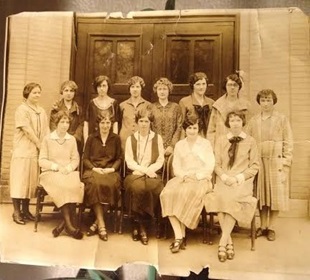 Vera Holmes Armstrong (seated in the middle of the front row) with West Pittston Staff, 1928, Courtesy of Jean Armstrong Demaree.