Phyllis Lee Walker was born in Portsmouth, Virginia on May 23, 1896. She was raised by her mother, Mary Eliza Boothe, and her maternal grandparents and grew up with her aunt, uncle, and younger cousin. Her father, James Vincent Knott Walker, died five months before Phyllis was born. Her brother, Milford Boothe Walker, died at the age of three, the night before she was born.

Phyllis entered Goucher in 1913 and immediately became involved in campus activities. Throughout all four years of college, Phyllis was a member of the Goucher basketball team. But Phyllis wasn’t only interested in sports; she also had a creative side. During her senior year, she played one of the witches in the Goucher Senior Theatrical production of Macbeth.

Phyllis’s greatest interest was social service. She graduated with a degree in social sciences in 1917. In the yearbook, a classmate wrote: “Her ambition aims directly at social service and kindergarten work, and by the reports from kindergarten lab, she should be a success ... all the little boys of about six years near Goucher are going to miss her.” The classmate also commented on Phyllis’s “northern energy,” despite her “southern gentleness.” Perhaps, it was this energy that led Phyllis to participate in the February 3, 1917 College Day where Phyllis and 29 other Goucher students picketed the White House to advance the cause of women’s suffrage.

The Congressional Union for Woman Suffrage, later known as the National Woman’s Party, began to organize pickets in front of the White House in January of that year. The Union, founded by Alice Paul in 1913, organized six pickets a week. While college students would be among the women picketing daily, the Union specifically planned themed days like College Day. The young Goucher women joined suffragists from twelve other colleges in Washington, D.C. on a cold Saturday morning, disregarding Goucher President William W. Guth’s instructions forbidding students from attending the pickets. After Goucher students ignored his instructions and marched on the picket line, Guth publicly rebuked their actions. Despite the president’s censure, the students were proud of their participation in the White House picketing. In a sympathetic February 6th Baltimore News article titled, “Mrs. Scott Talks Back,” Mrs. Townsend Scott, the chairman of the Maryland branch of the Congressional Union, explained that the picket “strengthened their [students’] resolve and, furthermore, would encourage others to join the movement.”

After graduating from Goucher, Phyllis attended Columbia University where she took classes in sociology and economics, receiving an M.A. degree in social work in 1918. For the rest of 1918, Phyllis worked with the Ordnance Department of the U.S. Army in Washington, D.C. In February 1918, the Ordnance Department opened up 90 positions for women. A Goucher Weekly article reported that the jobs paid the same salary to women and to men. Phyllis also worked for Morris Plan Bank and the Juvenile and Domestic Relations Court in Virginia. In 1923, fulfilling her earlier ambition, Phyllis became a Latin instructor at St. George's School in Portsmouth, Virginia.

From 1930 through 1940, Phyllis worked as a social worker in New Orleans, Louisiana, Montgomery, Alabama, and Atlanta, Georgia. In the early 1940s, Phyllis took a job in with the federal government. She was responsible for supervising the training of American employees who worked abroad in vocational rehabilitation. She was appointed as chief of the Federal Office of Vocational Rehabilitation’s International Division. As chief, she helped develop an international guide for the United Nations, which outlined procedures for creation or expansion of rehabilitation programs for disabled people. She believed that such rehabilitation services should be part of the all social and health programs in the country. This idea was in turn adopted by the International Labor Organization in 1955. Phyllis also worked with the University of Chicago to develop its Office of Vocational Rehabilitation’s international program. While in Chicago, Phyllis received a second M.A. degree from the School of Social Service Administration of the University of Chicago, and completed classes towards a Ph.D. in social work at the University of Chicago. Phyllis’s pioneering work in rehabilitation was formally recognized in 1962 when she received an award from the United States Committee of the International Society for Rehabilitation of the Disabled. After over 30 notable years in government service, Phyllis retired to Williamsburg, Virginia in the 1970s.

Throughout her life, Phyllis continued to support women’s rights and education for women. She was also active within her Virginia community by connecting to her interest in history. She was knowledgeable about Civil War, United States, and Virginia history. She passed this interest to her daughter, Mary. They spent many weekends “in dusty courthouses throughout Virginia doing genealogy research.” She was a member of the Daughters of the American Revolution, The Virginia Historical Society, and the Historical Societies of Portsmouth, Suffolk, Princess Anne, and Southampton counties in Virginia. Phyllis also served on the board of the Society for the Preservation of Virginia Antiquities and was a member of the Virginia Forestry Association. On February 3, 1991, exactly 74 years after marching in the College Day suffragist picket, Phyllis Walker Francis died at the age of 95. Beloved and admired by her family and friends, she was buried in the Walker family lot in the Oak Grove Cemetery in Portsmouth, Virginia. 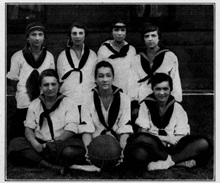