Nell Fidelia Mercer (1893–1979) was a militant white suffragist and member of the National Woman's Party (NWP). She was born on January 24, 1893 in North Landing, Virginia to Wilson J. and Annie Mercer. The second-eldest of ten children, Nell Mercer grew up in Norfolk, Virginia. While her mother stayed home to raise the children, Mercer's father owned and operated a store. In her mid-twenties, Nell moved out of her childhood home and lived with her two younger sisters, Bertye B. and Lilly R. Mercer, in a boarding house, still residing in the city of Norfolk. The three girls all worked as stenographers, according to the 1920 United States Census.

As the fight for women's suffrage intensified late in the 1910s with the onset of picketing in Washington, D.C., Mercer was inspired to join the Virginia branch of the NWP in 1919 and was arrested multiple times. Mercer's most notable arrest occurred on February 9, 1919, days before a federal suffrage amendment was to be voted upon by Congress. She carried a fiery urn along with Elizabeth McShane in the final "Watchfire" demonstration. After parading through the streets in a group of nearly sixty demonstrators holding suffrage banners, Mercer and McShane placed the urn in front of the White House gate where the participants came together to burn a figure of President Woodrow Wilson in effigy. Police quickly arrested most of the protesters. The following day, Mercer was tried along with 28 other women for their actions in this demonstration and was one of 25 suffragists tried for unlawful fire-setting on the White House grounds. All were convicted and given the choice of paying a fine or jail time. All refused to pay and were sentenced to serve time in the District of Columbia Jail. Mercer ended up serving a five-day sentence, suffering under harsh prison conditions.

In 1920, Mercer was honored for her sacrifices to the movement by being awarded a "Prison Pin," along with 165 other suffrage arrestees. Though women finally obtained their right to vote in August that same year, Mercer still remained an active member of the Virginia branch of the NWP and argued for greater rights for all women beyond merely the right to have a voice in one's government. She was elected to her local NWP branch's Advisory Board around the year 1925, and subsequently assisted chairman Sophie G. Meredith in organizing meetings and finding speakers for events. In 1926, Mercer was one of only 28 NWP members from across the country chosen to travel to Paris, France as delegates to the Tenth Congress of the International Woman Suffrage Alliance where she got the chance to converse with women's rights activists from across the globe.

Mercer later returned to Norfolk where she was the manager of her own hardware store and an employee of a cross-seam manufacturer. In 1929, she married Clifton N. Phillips, a Great War veteran who was nine years her senior. Though the couple never had any children together, Mercer helped raise Phillips's two sons from a previous marriage. The couple divorced sometime before 1940 and Mercer ended up in Coral Gables, Florida where she managed her own hotel. She remained an ardent supporter of women's equality until her death in 1979 at the age of 86, and was later buried beside her sister, Bertye, in North Landing, Virginia. 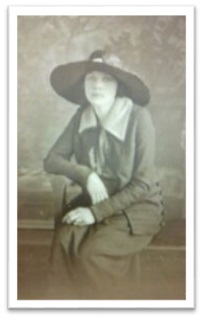