Miriam Lovett Eggleston was born on August 8, 1898 in Philadelphia, Pennsylvania. She grew up with her parents, Charles Fellowes Eggleston and Mary Ella Lovett, her older sister, Elizabeth Dare, and younger sisters, Catharine and Virginia. The Egglestons had early American roots, and could trace their ancestry back to John Alden, an Englishman who sailed to America aboard the Mayflower in 1620.

Miriam enrolled at Goucher in 1916, and along with her sister Elizabeth graduated in 1920. At Goucher, Miriam studied education. During the second semester of her freshman year, Miriam joined a group of Goucher students attending the College Day picket organized by the Congressional Union for Woman Suffrage. The organization had started a picketing campaign in front of the White House in January of that year. Suffragists picketed six days per week until the 19th amendment passed Congress.

Despite being strongly advised against going to the picket by Goucher’s president, William W. Guth, Miriam and approximately 29 other Goucher students stood their ground outside the White House on February 3, 1917. Miriam’s presence at the picket, together with that of four other Goucher students, was captured in a Baltimore News photograph of the women on their way to Washington. Published the same day as the picket, the headline reads, “The Cold Has No Terrors for Them.” President Guth criticized the women for participating in the picket during a speech he made in front of the entire college. Though rebuked by Guth, the students were not disheartened and in fact, were very encouraged by the day’s outcome. According to a sympathetic Baltimore News article written on February 6, 1917, titled “Mrs. Scott Talks Back,” the picketing “strengthened their resolve and, furthermore, would encourage others to join the movement.” Mrs. Townsend Scott, chairman of the Congressional Union’s Maryland branch, believed that Guth’s criticism was overly harsh.

In Goucher’s Donnybrook Fair yearbook, Miriam was described as “most loving and earnest." It goes on to say that she was “good-looking and an awful tease, good-natured, gracious” and that “she loves fine clothes and dances, too, with loving deeds filled through and through.”

Miriam began teaching after college graduation at a school in Colwyn, Pennsylvania. She continued working as an educator until 1922 when she married William Stanley Kite. Miriam and William had two daughters, Elizabeth (b. 1925) and Elaine Alden (b. 1927). The family summered in Eagles Mere, a northeastern Pennsylvania resort.

Miriam died on the seventh of June, 1990 in Chester, Pennsylvania. At the time of her death, Miriam had four grandchildren and three great-grandchildren. 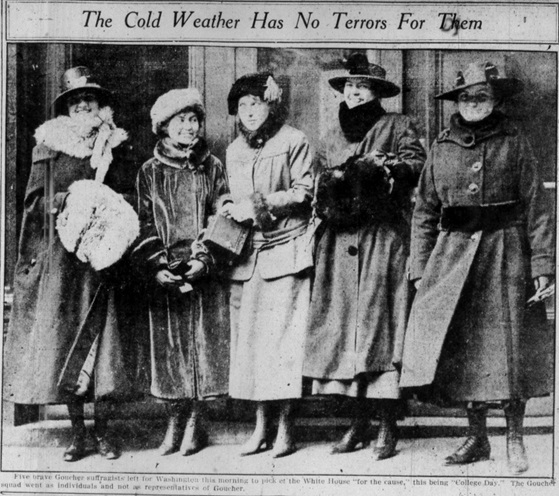 “The Cold Weather Has No Terrors For Them,” Baltimore News, February 3, 1917. The caption reads, “Five brave Goucher suffragists left for Washington this morning to picket the White House ‘for the cause,’ this being ‘College Day.’ The Goucher squad went as individuals and not as representatives of Goucher.” Though the Goucher students are unidentified individually, a 1984 letter written by Christina Flint suggests the women are Elizabeth Watters, Christina Flint, Miriam Eggleston, Lucy Graves, and Vera Armstrong. The Flint letter can be found in her Alumni Individual Record, Special Collections and Archives, Goucher College Library.