Mary Ethridge Logue (neé Ross) was a notable picketer at the White House for women’s suffrage in the late 1910s. She was born on September 15, 1902 to parents Oliver J. Ross and Marion T. Ross in Norfolk, Virginia. Mary Ross, the daughter of a house painter, was the second eldest of four children in her working-class family.

In the early 1910s, Ross met Daniel Logue, an immigrant from Coleraine, Ireland who had ventured to the United States in 1908. Logue eventually joined the U.S. Marines on October 27, 1917 and served his new country in WWI in the trenches of France. Upon his return from the war, the young couple wed on July 23, 1918, when Mary was only 15 years old and Daniel was 28. The newlyweds ended up residing with Mary’s parents and siblings after their marriage, and Daniel took up work as a laborer.

It was around this time that Mary Logue began to voice her suffrage views publicly. Logue began picketing the White House in 1918 and became an active participant in many other suffrage demonstrations. Most notably, she participated in the first-ever “Watchfire” demonstration on New Year’s Day 1919, guarding an urn in which copies of President Wilson’s speeches were burned until 2 o’clock in the morning with NWP organizer Margery Ross, no relation. Logue was a frequent figure in the multiple “Lafayette Demonstrations” in the summer of 1918, which consisted of gatherings of women at the statue of Lafayette, outside the White House, where she held banners to protest the lack of action on the suffrage amendment.

By 1920, the family had relocated to the Washington, D.C. area, where Daniel was working as a machinist for a railroad company. According to the 1930 census, Mary and Daniel Logue had finally purchased their own home in Prince George’s County, Maryland and were living on their own. The couple had four children together: Anna E., John W., Robert O., and Charles P. Logue. On October 7, 1935, Daniel passed away suddenly after four days in the Veterans’ Hospital. Because of his excellent military record, Daniel was honorably buried at Arlington National Cemetery. On March 26, 1979, Mary passed away at the age of 76. She is buried in Cedar Hill Cemetery in Prince George’s County, Maryland. 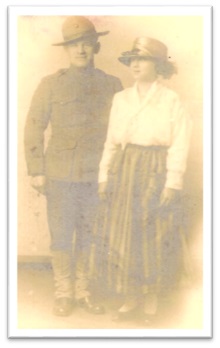 *{Mary Logue with her husband, Daniel (in WWI uniform).}* 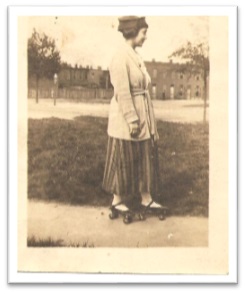 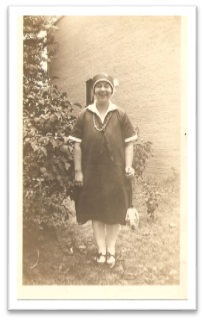