Lucy Christina Flint (who went by Christina) was born in Indiana on September 7, 1897 to Hugh Flint and Lucy Belle Donnell. She graduated from Greensburg High School in Indiana before matriculating at Goucher College in Baltimore. She studied at Goucher from 1916-1920 and graduated with a degree in Social Science. Her classmates described “Chris” as having a “steady head that works with speed and skill.”

On February 3, 1917, Christina was one of several Goucher students who traveled to Washington D.C. to participate in the “College Day” women’s suffrage picket outside of the White House. Goucher students had been forbidden by college President William W. Guth from participating in the picket because he viewed the action as an unnecessary spectacle and burden upon President Wilson in a time of turmoil. Despite President Guth’s ban, approximately 30 Goucher students chose to participate in the picket as individuals. In a letter written in 1984, Christina recalled how she and four other students “took the early morning train to Washington” and “reported to Alice Paul at Headquarters - now the Little White House.” She remembered that “it was a cold windy day and there was snow on the ground.” A photo of Christina and her companions was published in The Baltimore News the morning of the picket, which prompted a speech by President Guth castigating the picketers for their actions.

After graduation Christina taught high school in Puerto Rico. There she met William Edward Small, also a teacher, and they married on June 10, 1922. They lived and taught in the Philippines between 1923 and 1925. Christina and William also lived and worked in Venezuela and Honduras. After the couple returned to the U.S. they taught on Indian reservations in Minnesota and Wisconsin.

The couple’s only daughter, Patricia, was born in 1929 in Wisconsin. Immediately after her birth the couple moved to Arizona where William was Principal and Christina was a teacher at the USM School. The couple also helped to start one of the first kindergartens in Osborn School District, Phoenix.

In 1935 Christina began working as a social worker with the Arizona Department of Public Welfare while her husband went back to school. William died in 1943.

After her husband’s death, Christina enrolled at the University of Arizona for a graduate degree in social work. She served as president of the Phoenix branch of the Federation of Business and Professional Women’s Clubs from 1946-1948. In this capacity she led Phoenix women’s movements for political, legal and economic equality. She also moved into administrative roles in the Department of Public Welfare and took on a variety of roles including Director of Field Services.

Christina was extremely active in numerous service organizations dedicated to assisting women, children, the elderly and the mentally disabled in Phoenix. She took on leadership roles on numerous boards and was frequently the only woman in the room.

In 1967, Christina retired as State Director of Public Assistance and Services. After retiring she wrote that her greatest satisfactions in life were her “daughter and her family of three” and her “volunteer work through the years.” She was a dedicated volunteer at the Phoenix Art Museum and the Heard Museum of Native Cultures and Art. Reflecting on her career accomplishments, she emphasized moments in her life like her service on the Phoenix Endorsement Council “which chose the first woman council member candidate” and being “a sponsor of the first Inter-Club Council.”

After retirement Christina turned her expertise in social services to the problems faced by the elderly in Arizona. She cochaired the first Senior Summit of Arizona Council for Senior Citizens and in 1974 she was named “Outstanding Senior Citizen of Arizona.” In 1978 she was chosen by the Governor’s Advisory Council on Aging to intern with Senator Dennis De Concino in Washington, D.C. Among her successes was the creation of a committee to review nursing home standards in Arizona, of which she was a member.

In 1970 Christina wrote that she had “seen Phoenix grow from 37,000 in 1934” to the metropolis it would become. Christina herself played a large role in that growth and was recognized for her dedication to service and for her achievements as a social service administrator. Her efforts helped pioneer services for children, the elderly and the disabled in Arizona. Christina died in Phoenix on December 19, 1992.

Details of Christina’s early life are found in articles in the Greensburg Daily News. A description of her involvement in the College Day picket can be found in correspondence included in the Christina Flint Alumni Individual Record (Special Collections & Archives, Goucher College Library). News of her involvement in the College Day picket and Dr. Guth’s response appears in the article: “Rebukes Goucher Girls,” The Sun (Baltimore), 6 February 1917. Information about her Goucher College activities is found in Donnybrook Fair, the college yearbook. Details of Christina’s professional and volunteer activities after Goucher are found in a biographical sketch of Christina by Janolyn Lo Vecchio in Women Who Made a Difference, Volume III (Phoenix: Arizona Federation of Business and Professional Women, 2003), Bulletin of Goucher College (Baltimore: Goucher College, 1929), 1930 and 1940 U.S. Census data, and the Class of 1920 Student Alumnae Class Records and Photos (Special Collections & Archives, Goucher College Library). 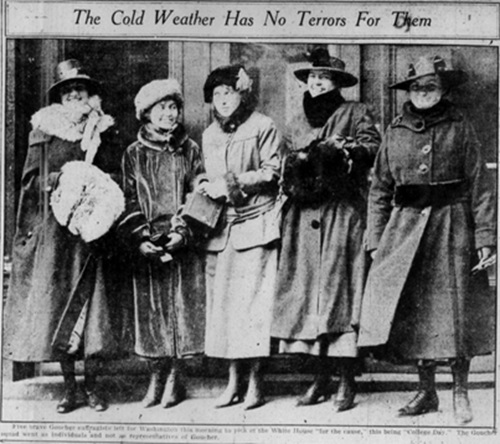 Christina Flint (second from left) posing on her way to the suffrage picket at the White House. 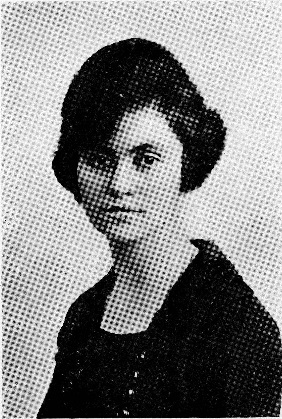