Louise Bryant was born on December 5, 1885 into the family of Hugh Mohan, a journalist and minor politician, and Louisa Flick in San Francisco, California. When Bryant was about four years old her parents divorced. Bryant spent a good amount of her childhood on a ranch near Reno, Nevada living with her mother and her stepfather Sheridan Bryant. Louise eventually took her last name from him, a brakeman and a freight train conductor.

Louise Bryant’s flirtatious traits and natural beauty helped her throughout her life as a suffragist and activist. She attended the University of Oregon where she found her passion for women's suffrage. She graduated in January 1909 with a degree in history.

After a brief marriage to Paul Trullinger, an affluent dentist, Bryant met Sara Bard Field, the principal mover and shaker of the Oregon suffrage crusade, in 1912. She encouraged Bryant to become an active suffragist, urging her to use her ability to write as well as her intellectual speaking skills in Oregon's women's suffrage movement. Bryant connected with the National Woman’s Party when their picketing of the White House became controversial in 1917. In February 1919, she joined a watchfire demonstration, was arrested, and spent 5 days in jail.

Bryant’s writing ability is what drew together Louise Bryant and John Reed, a socialist writer and author of a popular first-hand account of the Russian revolution, Ten Days that Shook the World. Reed was a well-known writer for a variety of papers and had interests in a range of topics. Although he influenced Bryant’s writing in politics, Reed was not a significant socialist influence on Bryant and did not directly influence her feminism.

A year after meeting Reed the couple traveled to Russia where they wrote for The Masses, a socialist magazine that covered many topics, including feminism. Louise had a different view of feminism than the rest of the women working for The Masses. She viewed the goal of feminism as gaining equality between the sexes while other women thought that the purpose of feminism was to gain power over the men. Bryant’s looks and intellect were threatening to some of the other women working for The Masses. After some time in Russia Reed was diagnosed with typhoid fever. On October 19, 1920, at the age of thirty-three, John Reed died in Moscow. Bryant returned to the United States in the summer of 1921, spending most of her time in New York with some exceptions such as to Washington, D.C., where she carried out her passion for speaking and writing, consisting of some novels.

Bryant eventually married the Assistant Secretary of State, William Christian Bullitt. Once married, Bryant and Bullitt’s relationship turned complicated. They had one child, Anne Moen Bullitt, but in 1924, they suffered a difficult divorce. Bryant became a heavy drinker and started a same sex-affair with the sculptor Gwen Le Gallienne. Bryant relinquished custody of Anne to Bullitt. On January 6th, 1936 while climbing the stairs to her hotel room in Paris Louise Bryant succumbed to a hemorrhage and fell to her death. 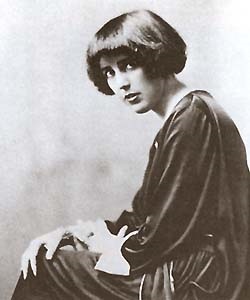