Hilda May Bergner was born in Baltimore, Maryland in 1895 to Frederick and Mary Emily Holland Bergner. Her father, a German immigrant, owned a retail store. Frederick Bergner doted on his daughter and often kept her with him at the store and in meetings. When she was 15, Hilda began attending the Roland Park School, a private preparatory school for girls in Baltimore.

She attended Goucher College from 1913-1917. At Goucher she was Athletic President, a member of the basketball and field hockey teams, active in the YWCA, and involved in several theatrical performances. In the yearbook her classmates wrote, “she shines in our hearts like a vestal flame when we think of her acting and Robin Hood fame.”

On February 3, 1917 Hilda traveled to Washington D.C. to participate in the “College Day” women’s suffrage picket outside of the White House organized by the Congressional Union. Goucher students had been forbidden by college President William W. Guth from participating in the picket because he viewed the action as an unnecessary spectacle and burden upon President Wilson in a time of international political turmoil. Despite President Guth’s ban, approximately 30 Goucher students chose to participate in the picket as individuals. President Guth later reproached the students for their participation.

After receiving her A.B. in Romance Languages at Goucher, Hilda studied journalism at Columbia University. She was active with the Red Cross Civilian Relief between 1918 and 1920.

In 1920, Hilda returned to Baltimore. While participating in an alumnae play she was approached by Adele Gutman, a member of the class of 1910 and one of the founders of Baltimore’s Vagabond Theatre. In an essay on play production, Hilda described her first collaboration with the Vagabond as “crawling over the floor painting acres of unbleached muslin lavender.” After this first foray into the world of little theatre, Hilda frequently appeared as an actress with The Vagabond Theatre and was lauded for her role as “Gertrude” in Fashion among other successes. She then moved to New York where she continued her acting career.

In New York, Hilda met James Stanton Robbins (known as Stanton) and they married in 1926. Stanton was a recent Yale graduate who started a business with the Holland America Line using steerage space to create small, inexpensive cabins for young people. While Stanton ran his steamship business, Hilda ran a shopping service out of their shared office in Paris. In 1931 Hilda and Stanton co-founded a European travel business, Europe on Wheels Inc., which sought to popularize the freedom of traveling by car. In the 1930s, they published a popular driving guide to Europe titled The Hand-Me-Down, which collected recommendations from customers of their pioneering car rental business. Hilda’s other publications include Where AOA Airplanes Land (1947), which she wrote in conjunction with the American Overseas Airline, and The Travelers Windfall (1939), a guide to traveling in the United States that she edited as president of the Travelers’ Windfall Association.

Hilda and Stanton ran the business from New York. They had three daughters together: Chelsea, Noel and Judith. During the girls’ childhoods, Hilda volunteered with the Bronxville Parent Teacher Association Council and taught dramatics as part of the Bronxville summer recreation program. At the start of World War II, Europe on Wheels closed and the family moved to Washington and then to England when Stanton accepted a position with AOA. They also lived in New Orleans for some time when Hilda and Stanton became involved in International House, the first model for a World Trade Center in the world.

In 1954 Hilda began working with the University of Puerto Rico to facilitate academic trips for students to Europe and the United States. She was first connected with Puerto Rico through her husband, whose historic preservation and tourism promotion work had led him to be hired to help attract tourists to the island. The couple remained in Puerto Rico for the remainder of their careers.

When Hilda retired, she moved to Connecticut and lived in a home the family built in Stonington. Hilda died in January 1987.

Details of Hilda’s early life are from an interview conducted with her daughter, Noel Congdon, 8 July 2016. Hilda’s college activities appear in issues of Donnybrook Fair, the college yearbook, and the Goucher College Board of Trustees Records (Special Collections & Archives, Goucher College Library). News of her involvement in the College Day picket appears in the article: “Rebukes Goucher Girls,” The Sun (Baltimore), 6 February 1917. A record of her early professional career can be found in Bulletin of Goucher College (Baltimore: Goucher College, 1929). Her entrance into theatre is documented in Goucher Alumnae Quarterly (Baltimore: The Alumnae Association of Goucher College, 1923). Her theatrical career is documented in newspapers like the Baltimore Sun between 1920 and 1926. Her activities in Bronxville are documented in The Bronxville Review-Press. The early days of Europe on Wheels are recorded in Goucher Alumnae Quarterly (Baltimore: The Alumnae Association of Goucher College, 1932). Hilda’s travel career and later life are documented in articles from The New York Times and The Chicago Tribune, and her obituary, “Hilda Robbins,” The Day, 28 January 1987. 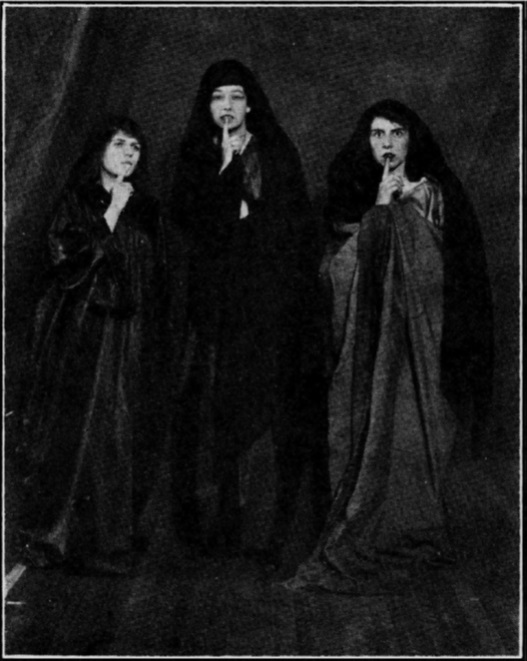 Hilda Bergner (furthest right) as a witch in Macbeth. The Donnybrook Fair, 1918 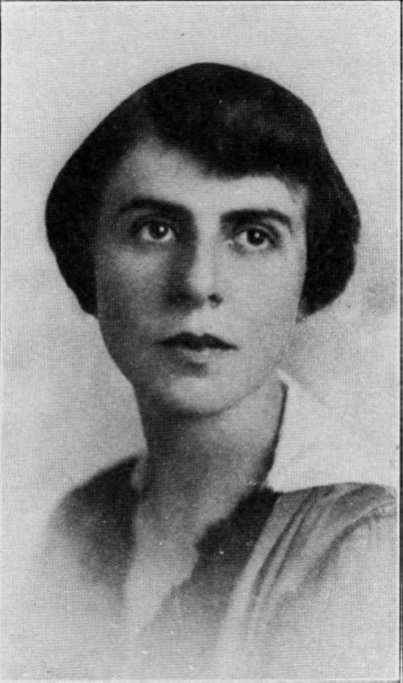 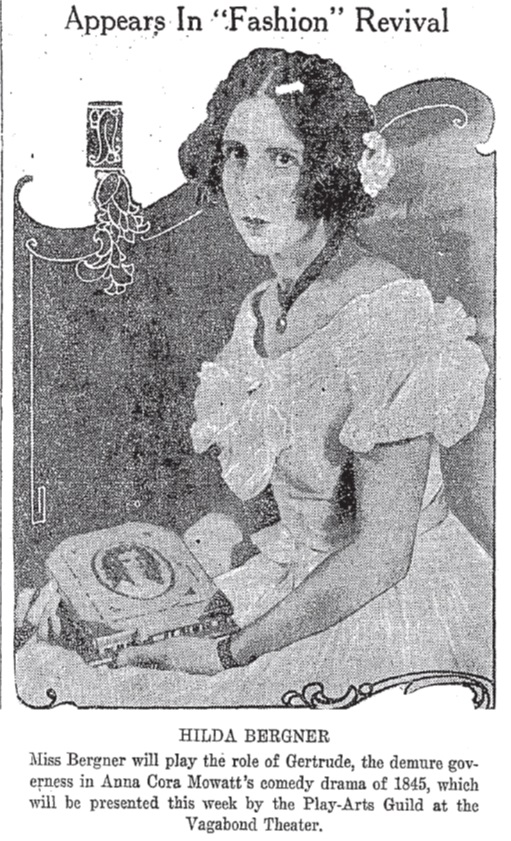 Hilda Bergner in promotional material for the Baltimore Vagabond Theater. Source: The Sun, Oct 19, 1924.
back to top
Previous Next