Gertrude Rollie Levy was born in 1898 in Tallahassee, Florida. Her parents were Aaron and Hannah B Levy, from New York and Washington D.C., respectively. Gertrude attended a one-room schoolhouse until she was 10 years old, when she and her sister Jeannette were sent to attend Notre Dame of Maryland Collegiate Institute for Young Ladies in Baltimore. She attended Goucher College from 1914-1918 and was Editor-in-Chief of the student newspaper, The Weekly, in her senior year. She was also a frequent contributor of poetry and fiction to Kalends, the college literary magazine.

After graduation Gertrude and her sister moved to Philadelphia where Gertrude gained employment, first, as an investigator for the Bureau of Labor Statistics and then as a reporter for the Philadelphia Press until it shut down in 1920. Gertrude later moved to New York where she wrote for several publications, including the New Yorker, and edited Style Trend. She met her husband, Joseph Giavani, in New York and they married at a friend’s apartment in 1939. Giavani was an Italian immigrant fleeing Mussolini. The couple had one daughter, born in 1940, before they moved to Tampa, Florida.

In Florida, Gertrude helped organize the Tampa Writer’s Club and several of her works were published. Her daughter describes her as very “intellectually curious,” having explored many different philosophies and religions in her lifetime. Gertrude remained involved in issues pertaining to women’s political involvement and was an active member of the League of Women Voters throughout her life. In addition to her accomplishments with the writer’s club and League of Women Voters, in 1961 she wrote to her classmates that she was especially proud of her “popular and brilliant daughter at Duke.” She returned to Baltimore in 1963 and died in Washington D.C. in June 1984.

A record of Gertrude’s professional career can be found in Bulletin of Goucher College (Baltimore: Goucher College, 1929). Details about her early life and character are from an interview conducted with her daughter, Elizabeth Giavani Verville, 6 June 2016. News of her involvement in the College Day picket appears in the article: “Rebukes Goucher Girls,” The Sun (Baltimore), 6 February 1917. Her participation in college activities is demonstrated in issues of Kalends, the Goucher College literary magazine, and Donnybrook Fair, the college yearbook. Her life in Tampa is documented in the 1959 and 1961 issues of Goucher Alumnae Quarterly (Baltimore: The Alumnae Association of Goucher College). 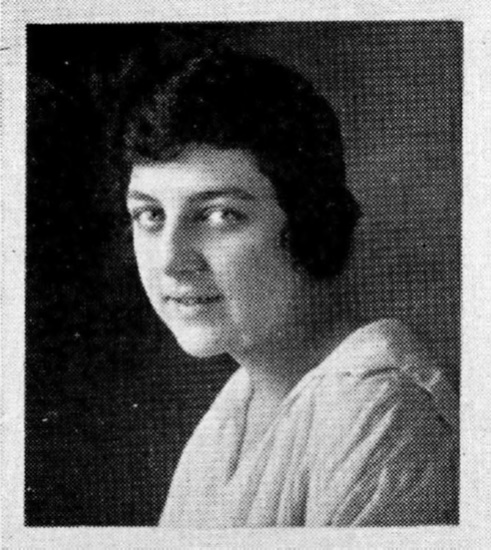 Gertrude Levy as a college senior in 1918. Source: Donnybrook Fair, 1919.
back to top
Previous Next