Florence Bayard Hilles was perhaps Delaware’s best-known National Woman’s Party (NWP) activist. Unlike Delawarean Mabel Vernon, whose work as a paid organizer for the Congressional Union (CU) and the NWP took her away from the state for long stretches, Florence Bayard Hilles devoted herself to the cause in Delaware and for Delaware. Born on October 17, 1865 into a distinguished Delaware family, Florence Bayard could count among her male relatives and ancestors a large group of prominent politicians, five of whom served as U.S. Senators, including her grandfather, James Ashton Bayard, her father Thomas Francis Bayard, and her brother, Thomas F. Bayard, Jr. As a girl, she lived part of the year in Washington, D.C., where her father served as Secretary of State under Grover Cleveland; as a young woman, she traveled to Great Britain after her father’s appointment as U.S. Ambassador to the Court of St. James. About a month after his death, in October, 1898, she married a lawyer, William S. Hilles, in a small Episcopal ceremony. William Hilles died in 1928. Although her mother had eight children, five daughters and three sons, Florence Bayard Hilles had only one child, daughter, Katharine Hilles (later Callery).

Hilles’s initial suffrage activism can be credited to Mabel Vernon, who opened a Congressional Union office in Wilmington in 1913. As Vernon later recalled it, she was giving a suffrage speech at the 1913 Delaware State Fair, when Hilles, who was there to exhibit her prize show dogs, signed a card stating “I believe in woman suffrage.” Possessed of wealth, position, a talent for leadership, and a sense of the injustice of women’s second-class status, as well as close ties to Delaware’s Democratic Party, Hilles was uniquely positioned to press for both a state and a national suffrage amendment. On May 2, 1914, as president of the Delaware Suffrage Association, Hilles organized and led Wilmington’s first suffrage parade in which the African American Equal Suffrage Study Club, led by Blanche Williams Stubbs, marched separately. A week later, on May 9, Hilles headed Delaware’s delegation (including Annie Stirlith McGee) to a major national parade in Washington, DC. Soon, Hilles was serving as Delaware chairman of the CU and then president of the Delaware branch of the NWP and a member of the Party’s executive board. After participating in the “Suffrage Special” cross-country railroad trip in April-May, 1916, she joined Mabel Vernon and others in confronting President Woodrow Wilson on behalf of a national amendment on December 4, 1916. As Vernon recalled, Hilles’s large winter coat served as camouflage for a banner Vernon unfurled as Wilson spoke at a joint session of Congress. The banner read: “Mr. President, What Will You Do for Woman Suffrage?”

When militant suffragists, frustrated by the lack of movement in Congress on a federal suffrage amendment, organized the “Silent Sentinels” to picket directly in front of Wilson’s White House, Hilles joined them. She was part of the “grand picket” of the White House on a rainy, freezing Inauguration Day, March 4, 1917, and on Bastille Day, July 14, 1917, she was among a group of sixteen White House pickets arrested and charged with blocking traffic. With the United States at war with Germany in an effort “to make the world safe for democracy,” Hilles used the occasion to connect the cause of woman suffrage to that claim, telling the judge:

For generations the men of my family have given their services to their country. For myself, my training from childhood has been with a father who believed in democracy and who belonged to the Democratic Party. By inheritance and connection I am a Democrat, and to a Democratic President I went with my appeal. What a spectacle it must be to the thinking people of this country to see us urged to go to war for democracy in a foreign land, and to see women thrown into prison who plead for that same cause at home.

The women were convicted, but refused to pay a fine. All sixteen were sentenced to sixty days at the Occoquan workhouse in Virginia. After serving three days, they received a presidential pardon.

Seeking to call attention to her claim on that occasion that her “services as an American woman are being conscripted … to help win the world war for democracy,” in April, 1918, Hilles went to work at the Bethlehem Steel munitions factory in New Castle, Delaware, near her country home, filling ammunition shells with explosive powder. The women she met were friendly and hard-working, all of them self-supporting and most with families. Among them were Adelina Piunti and Catherine Boyle. Laid off from their jobs due to a lack of material, Hilles and Boyle, along with eight other Delaware women munitions workers, traveled to Washington, D.C., in June, 1918, in an unsuccessful effort to meet with President Woodrow Wilson. In their appeal to the president, they stressed the dangerous nature of their work and their desire, through the right of suffrage, to be “recognized by our country as much her citizens as our soldiers are.”

Hilles did not return to munitions work when the lay-offs ended, but in January, 1919, a group of Delaware suffragists, including munitions workers Adelina Piunti, Catherine Boyle, and Naomi Barrett, as well as long-time activists Mary E. Brown, Annie Arniel, and Annie McGee, participated in the watchfire protest at the White House and were arrested. There is no record that Hilles joined the group on that occasion, though at a lunch on January 22, she welcomed three of them back to Wilmington after they had completed their sentences. Soon thereafter, she left for France to support the work of the American Commission for Reconstruction.

Following Congressional approval of the 19th Amendment, Hilles turned her energies to the task of state ratification. By March of 1920, with the amendment only three states short of victory, Delaware found itself in the nation’s collective eye. Suffragists and anti-suffragists from across the nation descended upon the state capital, Dover, during a ratification battle that lasted into the summer. Florence Bayard Hilles and Mabel Vernon, working together with other state suffragists, led the effort to convince state legislators to bring the amendment up for a vote. They failed. With other suffragists, Hilles then traveled to Tennessee, which on August 18, 1920, became the thirty-sixth and final state to ratify.

Like the NWP itself, Hilles had a complicated relationship to African American suffragists. On at least two occasions, the Wilmington Equal Suffrage Study Club participated in CU and NWP-sponsored activities: marching separately in the 1914 Wilmington suffrage parade and welcoming Hilles as a speaker in April, 1920. Yet in a 1915 speech to the Delaware legislature endorsing a proposed state suffrage amendment, Hilles cited the example of “a colored man … who can neither read nor write [but] … simply because he is a man, can vote” as an argument for enfranchising “a mighty army of women, armed with education.” Dismissing any concern about “giving the franchise to colored women,” she asked, “‘Don’t you know that this is a white man’s and a white woman’s State and always will be?’” Then, during the epic contest between suffragists and anti-suffragists over Delaware’s ratification of the federal amendment, she infuriated a co-worker by inviting the Equal Suffrage Study Club to join the NWP. “I tried to tell her how we have always (with great difficulty) kept ourselves clear of the negro question,” Pennsylvanian Dora Kelly Lewis fumed, “but she didn’t like my saying anything that implied the least criticism of her action.” Lewis believed that opponents of ratification would use the invitation’s implications to “wreck all our hopes.”

Florence Bayard Hilles remained an active member of the NWP and soon became a passionate advocate for an Equal Rights Amendment (ERA). Described in 1928 as “one of the most popular speakers in the Woman’s Party,” she traveled, spoke and wrote regularly on the need for an ERA, particularly as regards women’s economic rights; she vigorously opposed all protective legislation and championed the value of women’s unpaid labor in the home. From 1933 through 1938, she served as the party’s National Chairman, and later as honorary chairman. In 1943, the NWP dedicated the new library at its headquarters in Washington, DC in her name. Throughout, Hilles gave time to other commitments, including the International Women’s Suffrage Alliance, Women’s International League for Peace and Freedom, Wilmington Business and Professional Women’s Club, the Birth Control League, the Delaware affiliate of the Children’s Bureau, the Foreign Policy Association, and several garden clubs and historical societies. In Delaware, she was also known as an outdoorswoman, winning golf and tennis titles, and, in later life, raising rare flowers at her country home, Ommelanden.

Hilles died in a Philadelphia hospital on June 10, 1954 at the age of 88. Mabel Vernon and Alice Paul of the NWP attended her funeral at Wilmington’s Old Swedes (Episcopal) Church on June 12.

There is a biographical profile of Hilles on the web site of the Sewell-Belmont House, headquarters of the National Woman’s Party:
http://www.sewallbelmont.org/womenwecelebrate/florence-bayard-hilles/

Hilles’s work with the CU and NWP, including her stint at the Bethlehem Steel munitions plant, and her arrest and pardon, can be traced through the NWP periodicals The Suffragist and Equal Rights, as well as New York Times, which chronicled her activities in the suffrage and ERA campaigns.

Numerous photos and drawings of Hilles are available through NWP sources, including The Suffragist and Equal Rights. One of the better-known shows her standing and speaking to a crowd from an automobile: https://www.loc.gov/item/mnwp000400/

For a brief history of the Florence Bayard Hilles Library at the Sewall-Belmont house, see http://nationalwomansparty.org/learn/florence-bayard-hilles-feminist-library/ 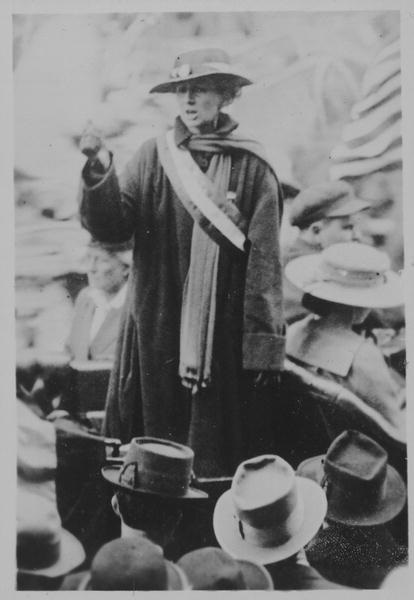