Born on November 4, 1897, Elizabeth Watters grew up in an established and deeply rooted Southern family in Norfolk, Virginia. She was raised by her mother, Mattie Watters, and her father, James Hatton Watters, who was a Civil War veteran. Elizabeth, nicknamed “Liz” by her family, was the youngest of five siblings, two older brothers and two older sisters.

Elizabeth attended Goucher College from 1916 to 1918. On a cold Saturday during the second semester of her freshman year, Elizabeth journeyed south to Washington, D.C. with a group of approximately 29 other Goucher women. February 3, 1917 was College Day when women from thirteen area colleges gathered in front of the White House to picket for the right to vote. The day was organized by the Congressional Union of Woman Suffrage, which was formed by Alice Paul in April 1913. The organization began picketing in front of the White House in January of that year, stationing large groups of women there six days a week. Although described by family members as “meek and quiet,” Elizabeth seemed to thoroughly enjoy the day with the other girls. Her great nephew believes that she was inspired by an older sister to get involved, but it is also likely that she was influenced by her classmates, who were committed to the suffrage movement. While there were twelve other colleges present at the White House picket on February 3, 1917, the Suffragist reported, Goucher College brought the largest group of students.

In a Baltimore News photograph from February 3, 1917, Elizabeth is pictured smiling in with four other Goucher students before they leave for Washington. The headline reads, “The Cold Weather Has No Terrors for Them.” The women not only braved frigid temperatures, but also the disapproval of Goucher president William Guth, who opposed the pickets while the country faced the crisis of world war. Despite President Guth’s criticism of their participation, the young women were not disheartened and in fact, were very encouraged by the day’s outcome, according to a sympathetic Baltimore News article written on February 6, 1917. The article quoted Mrs. Townsend Scott, the chairman of the Maryland branch of the Congressional Union, who observed that the picketing “strengthened their resolve and, furthermore, would encourage others to join the movement.”

Although Elizabeth left Goucher in 1918 after only two years of study, she enrolled in school again five years later, this time back in Virginia. In September 1923, she entered the State Normal School for Women, receiving a professional two-year certificate from the State Teachers College in 1925. Afterwards, Elizabeth worked as a teacher in Virginia. She died on April 15, 1969.

Information on Elizabeth’s birth, birthplace, and dates at Goucher can be found in her Alumni Individual Record (Special Collections and Archives, Goucher College Library). Information about the picket was found in the Suffragist (Archives, Sewall-Belmont House and Museum), the National Woman’s Party Papers (Library of Congress), the Baltimore News (Enoch Pratt Library), and newspaper clippings from Public Relations scrapbooks in Special Collections and Archives at Goucher College. Details about her family came from Ancestry.com and from an email exchange with her great nephew, Ross Griff. 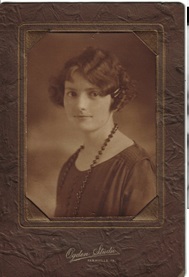 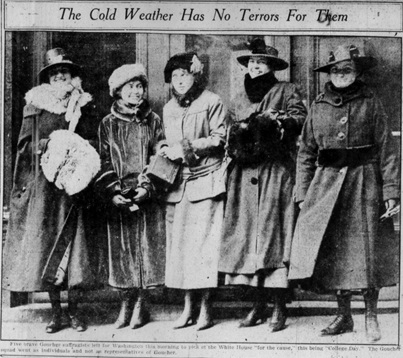 “The Cold Weather Has No Terrors For Them,” Baltimore News, February 3, 1917. The caption reads, “Five brave Goucher suffragists left for Washington this morning to picket the White House ‘for the cause,’ this being ‘College Day.’ The Goucher squad went as individuals and not as representatives of Goucher.” Though the Goucher students are unidentified individually, a 1984 letter written by Christina Flint suggests the women are Elizabeth Watters, Christina Flint, Miriam Eggleston, Lucy Graves, and Vera Armstrong. Flint’s letter can be found in her Alumni Individual Record, Special Collections and Archives, Goucher College Library.