Catherine Magdalen Thornton Boyle, the second of seven children of Irish immigrants Catherine Shields Thornton and Patrick Thornton, was born in Delaware in 1879. Hers was a working-class family; her father was a fireman, and two brothers worked as laborers in a cotton mill. In January, 1900, in a Roman Catholic ceremony, she married Thomas Boyle of New Castle, Delaware, a moulder in a steel mill. Although the 1900 census found her still living with her parents, by 1910 she and her husband were renting quarters in Wilmington, Delaware and by 1920, they had purchased a home on Yonge Street in New Castle, Delaware, where her mother and brother Henry joined the household; Boyle lived the rest of her life in New Castle. She bore six children, only three of whom survived infancy: Thomas, Jr. was born in 1902, Catherine (later Burrows) in 1904, and Bernard in 1916 (he died in 1923). Thomas, Jr., a spinner in a rayon mill, along with his wife and five children, returned to live with his parents during the Depression of the 1930s.

Boyle began contributing to the Congressional Union, predecessor of the National Woman's Party (NWP) in 1915. During the flu epidemic of 1918, Boyle used her nurse's training and opened her home to "twenty-seven men working in a powder factory and nursed them all through influenza because no doctors could be found for them." It seems likely that Boyle joined the wartime production effort during that time because by 1918, Boyle was employed by the Bethlehem Steel Company's plant in New Castle, Delaware. There, she was in contact with militant suffragists, most notably Florence Bayard Hilles, who, despite her pedigree as the daughter of a high-ranking politician, "donned a working women's uniform and became a munitions worker." Together with eight other Delaware women munitions workers, Boyle and Hilles traveled to Washington, D.C., in June, 1918, in an unsuccessful effort to meet with President Woodrow Wilson. In their appeal to the president, they stressed the dangerous nature of their work and their desire, through the right of suffrage, to be "recognized by our country as much her citizens as our soldiers are."

Boyle returned to Washington in January, 1919, with Florence Bayard Hilles, Adelina Piunti, Mary E. Brown, Annie Arniel, and other Delaware women to participate in the watchfire movement at the White House in support of woman suffrage. Carrying banners and setting watchfires, suffragists from the NWP protested, picketed, and burned copies of President Wilson's speeches. At some point, Boyle posed for a studio portrait in Wilmington, formally dressed and holding a tricolor suffrage flag. Impending changes at the New Castle work place may have reinforced Boyle's interest in militant suffragism. The plant was preparing to transition to postwar production and very likely trim its workforce. It seems plausible that Boyle and her coworkers anticipated or may have already been informed of upcoming layoffs. Indeed, the plant downshifted just a month after Boyle joined the 1919 protests.

Given the choice of a fine or jail time for starting fires on the White House grounds, Catherine Boyle willingly served five days. Conditions in the jail were deplorable and the days tedious. Many pickets became ill and experienced rashes, vomiting, and excruciating pain. After her jail time, she returned to Wilmington with Mary E. Brown and Naomi Barrett; all three were guests of honor at a luncheon honoring NWP Delaware chairman Florence Bayard Hilles at the Hotel du Pont. A local newspaper described the three as looking "none the worse for their experience, but proud that they had been imprisoned for the cause of political freedom for women."

Following the passage of the 19th Amendment in l920, Boyle worked as a nurse in Delaware, both in maternity care and in private-duty work. Her husband Thomas succumbed to pneumonia and bronchitis in February 1943. Catherine Boyle died on March 11, 1955; after a funeral Mass, she was buried at St. Joseph's on the Brandywine cemetery in Wilmington, Delaware. In writing her obituary, her family happily claimed her as "a pioneer in the women's suffrage movement" in Delaware and "a member since its beginning of the National Woman's Party."

A photo of Catherine Boyle with a suffrage banner, taken by A.N. Sanborn of Wilmington, Delaware, is part of the NWP photo collection, available at the Library of Congress and on line at https://www.loc.gov/item/mnwp000091

A 1918 photo of Catherine Boyle with five other munitions workers, including Florence Bayard Hilles, seeking an audience with President Wilson, can be found in the Records of the War Department General and Specific Staffs, National Archives: https://catalog.archives.gov/id/533770

For Catherine Boyle's work experience at the Bethlehem Steel New Castle Plant, see "Pickets in War Work: How Mrs. Hilles's Associates Also Are Helping Their Country," New York Times, May 16, 1918, 8. There are no company records mentioning her by name, although the plant did have a "Female Department" during World War I. See NOTICE, Feb. 14, 1919, Accession 1699, Bethlehem Steel Company Records, New Castle Plant, Hagley Museum and Library, Wilmington, DE.

Catherine Boyle's family life is documented in the decennial censuses of 1900 through 1940. The marriage record can be found in the Delaware Public Archives records, available through Ancestry.com and familysearch.org 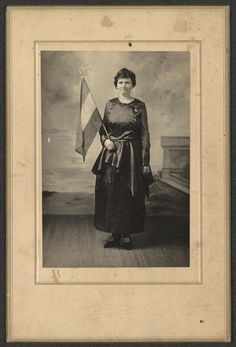 Description: Full-length studio portrait of Catherine Boyle, holding a tricolor suffrage flag and wearing a two-piece outfit with a locket or pocket watch pinned below her left shoulder, standing against a painted background of clouds and marble steps.