Berta Crone was born in Ft. Spokane, Washington on January 21, 1896. She later moved to DuPuyer, Montana with her mother Ella M. and stepfather Richard P. Dean. Ella M. Dean was a prominent member of the Congressional Union and the National Woman’s Party. Dean helped organize the Women Voters Convention in California at the Panama Pacific Exposition in 1915 and worked as the official hostess of the Cameron House beginning in 1916. Crone was most likely drawn into the work through her mother’s activism.

From 1915 to 1916, Crone organized Congressional Union and National Woman’s Party meetings and events alongside her mother in the San Francisco Bay Area. In November 1916 she organized a NWP Rally at Chabot Hall in Oakland. Crone traveled to Washington, D.C. during the picket campaign and was among the first group of suffrage pickets to stand in front of the White House gates on January 10, 1917. She continued picketing through the winter and spring.

Following United States entry into World War I, the pickets became increasingly controversial. The NWP continued their vigil at the White House and displayed banners with quotes from Wilson’s own speeches, highlighting the hypocrisy in his campaign for democracy abroad and his refusal to support women’s suffrage at home. The anti-suffrage crowds that gathered around the pickets grew increasingly violent. Law enforcement officials determined to arrest the pickets for obstructing traffic. Crone was one of the first pickets arrested alongside Mabel Vernon, Lucy Burns and several others on June 25, 1917. Crone was released without a trial. A few months later, Crone helped lobby Congress and traveled around the country speaking on behalf of the National Woman’s Party.

Following the successful passage of the Nineteenth Amendment, Crone continued to work on behalf of women in her role as the director of the New York Vocational Bureau in Manhattan. From the 1920s to the 1950s Crone helped women pursue careers of their choosing. In 1932, Crone married Erwin Norbert Horrock, an immigrant from Poland. She continued her career writing a column in Outlook magazine from 1933-34. She gave birth to a son in 1936. During World War II, she joined the War Manpower Commission placing women in defense-industry jobs. After the war she worked as an occupational consultant and even wrote a book entitled Money in Your Pocket: A Woman’s Home Companion Booklet (1953). Her husband, Erwin, died in 1956. Crone went to work around that time as a research director and editor with E. W. Williams Publications in New York. She retired from that work in 1971 and ultimately died of a stroke on September 18, 1983 at the age of 87.

Crone was featured in “The Women Who Are Guarding the White House Portals,” Washington Post, February 4, 1917, Magazine Section, 1. The story of her arrest appeared in “S. F. Suffragist is Arrested as Wilson Picket,” San Francisco Chronicle, June 26, 1917, 4. Her obituary revealed details about her accomplishments in “Berta Horrock Dies; Research Director for N.Y. Publisher,” Washington Post, September 24, 1983. 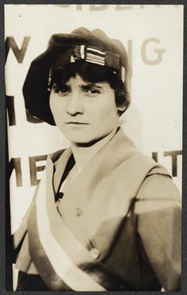 Image of Crone in front of White House Picket at Location: Miss Berta Crone of San Francisco on the CUWS [Congressional Union for Woman Suffrage] picket line at the White House gates. National Woman's Party Records, Group I, Container I:149, Folder: Crone, Berta http://www.loc.gov/resource/mnwp.149013/. The caption on an alternate photograph in the same folder reads: "Miss Berta Crone, of Dupuyer, Mont[ana], who organized for the Woman's Party in California prior to the recent presidential election, who is now in Washington, D.C., assisting in the work of the Congressional Union for Woman Suffrage.