By Alexandra Turcios-Cruz and Carly Wilbur

Another sketch for Lola Trax can be accessed at https://mdwomensheritagecenter.org/suffrage-bios-directory/

Lola Carson Trax was born on September 16, 1885 in Easton, Maryland to Pennsylvania natives, Emma and George H. Trax. She was raised in the state of Maryland with her 9 other brothers and sisters. As an adult, she actively participated in and held positions in numerous political and suffragist organizations where she was both a dedicated activist and a leader. Trax played vital roles in a number of suffrage organizations including the Congressional Union, National American Woman Suffrage Association, and the Just Government League of Maryland. She was also an avid writer, and practically a journalist. The Suffragist was one of her primary outlets, one where she consistently kept other suffrage supporters in the loop of women’s activism.

Two days before Trax’s 29th birthday, sixteen Congressional Union organizers marched out of Washington to make a few other states their new stomping grounds. These women were headed to states where women had already won the right to vote--they went “to see that no men are elected to Congress that will not pledge to vote for national woman suffrage.” Miss Lola C. Trax and Mrs. Edna S. Latimer were the two Congressional Union organizers that had been sent to Kansas. This was not the first time, however, that these women worked as an activist duo. In January of this same year (1914), they began a journey on foot together from the city of Baltimore to Annapolis with 15 other suffragists, to deliver a petition to the Maryland Legislation for women’s right to vote. By the time they stopped for the night in a camp that had little protection, many faint-hearted women devised excuses to not carry on. Only four courageous women, including Lola Trax and Edna Latimer, made it through that night and to Annapolis proudly delivering their petition.

According to an article in the Baltimore Sun in October of 1914, Trax acted as the doer of the pair. She was constantly out in the field, taking trains to new Kansas territories (often not entirely sure where she was headed) and giving speeches to anyone who was willing to listen. Trax never prepared her speeches, she felt it important to personalize each one. Before she ever spoke to an audience, she would spend the first five minutes analyzing them, ensuring that she catered to what they wanted to hear.

Organized in great detail and accompanied by numerous other dedicated women, Miss Trax began a 350-mile journey on May 30, 1915. They traveled in an impressively decorated wagon across the state of Maryland with the banner inscribed with the name of their organization (Just Government League of MD) and the quintessential phrase “VOTES FOR WOMEN” at the bottom in all capital letters. In tribute to the first known suffragist in the state of Maryland, they explained that during their journey to rally for women’s right to vote, they would visit the home of Margaret Brent on June 10th.

Trax was also a sought-after professional organizer. According to an interview with a previous Southern suffragist, she was hired to assist suffragists in South Carolina. The woman recounted that Trax encouraged them to, “Attract attention. Do it in any way. Put on public theatricals. Do anything you can to attract attention.” She explained that Trax organized a lot of “parades and circuses” which were basically publicity stunts that tended to anger many men and women alike, but ultimately worked to get the message across.

Lola Trax also served as the state organizer for woman suffrage in Alabama in 1918. After Congress approved the 19th Amendment in June 1919, the Alabama state legislature refused to ratify.

Like so many unknown activist women, Lola Trax did not stop after one success in the fight for women’s rights. She continually ventured on trip after trip, drafted petitions, made speeches, wrote for newspapers, and organized groups to work toward the goal of achieving full equal rights for women in the United States. Trax worked throughout her entire life for this cause until she passed away in the city she came into the world in, Easton, in 1962. She was buried there in Talbot county in Spring Hill Cemetery. 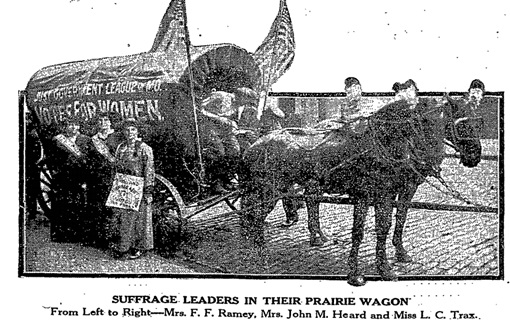 A record of Lola Carson Trax’s birth can be found in the Pedigree Resource File- Bretheim-Trax Family Tree, FamilySearch, https://familysearch.org/ark:/61903/2:2:3S7P-8WJ. A PDF record of the day Trax and her fellow Congressional Union organizers set out for their respective enfranchised states can be found through the Library of Congress website, https://www.loc.gov/collections/static/women-of-protest/images/detchron.pdf. Trax’s time in Kansas is described in the Baltimore Sun, October 18, 1914, p. 1.

The article discussing the Baltimore-to-Annapolis trip can be found in the Baltimore Sun January 7, 1914, p. 1.

The transcript of the interview with the Southern suffragist can be found at: http://docsouth.unc.edu/sohp/G-0054/G-0054.html