Rhoda Kellogg was born on January 23, 1898, in Bruce, Wisconsin. She was the seventh of nine children born to Charles L. Kellogg, a lumberman, and his wife Eva J. Kellogg. Eventually the Kelloggs moved to Minneapolis, where Rhoda would attend college at the University of Minnesota. She entered the university in 1916, and initially only planned to attend for a year or two before starting a short career as an elementary school teacher. At this point in time, a career in elementary education could be obtained without a completed college education. Kellogg also planned to teach for a few years before marriage and starting a family.

Although Kellogg had come from a conservative family, she believed that women should have the right to vote. Therefore, soon after entering college Kellogg joined the university’s Equal Suffrage Club, a decision that would greatly change her plans. In January 1919, Kellogg, along with other members of the university’s suffrage club, travelled to Washington to witness the watchfires taking place, as well as to see the national monuments. According to her journal, Kellogg had no intention of participating in the protests “but instead to attend as a sympathizer.” However, while attending the trial of Naomi Barrett—a suffragist arrested for participating in a watchfire in front of the White House on January 13—Kellogg and three other women continued to loudly applaud Barrett, even after the presiding judge had ordered silence. As a result, Kellogg and the other applauders were sentenced to twenty-four hours in jail for contempt of court. Although she was only in jail for one day, the experience opened her eyes to what the women who had been given longer sentences endured and their willingness to continue to do so to obtain their rights. This experience made her realize “what any woman might have to undergo without political power in the United States.”

Kellogg was arrested again on January 27, this time for participating in a watchfire in front of the White House. She, along with the five other women who participated, was arrested for “starting a fire after sundown” and sentenced to five days in jail. This time while imprisoned, Kellogg joined the other women suffragists in participating in a hunger strike, embracing “both radical behavior and its consequences as a woman seeking equality.” Kellogg would later describe her time spent in prison as “anything but pleasant.”

Overall, Kellogg described her trip to Washington as “the leading inspiration for all my life.” It was because of this trip that she was inspired to continue her education further than previously planned; she would become a lifelong educator and leader. After returning to Minneapolis, Kellogg completed her studies at the University of Minnesota and graduated with her B.A. in 1920. On August 3, 1920, she married Stanley Rypins, an English professor at the University of Minnesota.

Records show that Kellogg and her husband moved to California during the 1920s and had a daughter, Gratia Rhoda Rypins, in 1926. In 1928, Kellogg organized the first nursery school in San Francisco. The family then moved to New York and Kellogg continued her education at Columbia University, obtaining her master’s degree in nursery-school education in 1935.

By 1940, Kellogg was still living in New York with her husband and daughter. Here she became the director of WPA Nursery School in Brooklyn, New York from 1941 to 1942. Unfortunately on December 3, 1942, Kellogg’s daughter died at the age of 16. Kellogg moved back to California not long after this and became the director of eleven nursery schools during World War II. In 1945, Kellogg joined the Golden Gate Kindergarten Association in San Francisco. The following year she became the director of the association, a position that she held for the next 23 years until her retirement in 1969. Kellogg made many changes as director of the association including remodeling and redecorating the old school buildings, forming several nursery school units that would take place under one roof, each with a different type of program, and keeping the school open from 7:30 A.M. to 6:00 P.M. to accommodate for children whose mothers worked.

From 1948 to 1966, Kellogg collected more than one million paintings and drawings made by children from the United States as well as 30 other countries. From this collection, Kellogg discovered that “the art of children everywhere is identical until they start copying the art of their own culture.” Much of her analyses of the collected drawings can be found in her books such as What Children Scribble and Why, The Psychology of Children’s Art, Analyzing Children’s Art, and Children’s Drawings/Children’s Minds. Kellogg also wrote other books including the Nursery School Guide and Babies Need Fathers, Too, as well as various pamphlets and articles on children and art. Kellogg is also known to have given lectures on child art at various colleges around the world.

Kellogg died on August 21, 1987 in her San Francisco home, after a short illness. She was remembered in her obituary as an “international expert on child education and children’s art.”

A record of Rhoda Kellogg’s birth can be found in “Wisconsin, Births and Christenings, 1826-1926,” FamilySearch, https://familysearch.org/ark:/61903/1:1:XRF2-G9Z. Kellogg’s family tree can also be found on the Familysearch site in "Wisconsin, State Census, 1905." FamilySearch, https://familysearch.org/ark:/61903/1:1:MMQW-KF2. Notes on Kellogg’s education and graduation from the University of Minnesota, as well as her experience in Washington, D.C. during the watchfire protests of January 1919, can be found in Katherine H. Adams and Michael L. Keene, After the Vote Was Won: The Later Achievements of Fifteen Suffragists (Jefferson, N.C.: McFarland, 2010), 50-51. Kellogg’s two arrests are also noted in Inez Haynes Gillmore, The Story of the Woman’s Party (New York: Harcourt, Brace and Company, 1921). Quotes by Kellogg concerning her visit to Washington in 1919 can be found in Linda G. Ford, Iron-Jawed Angels: The Suffrage Militancy of the National Woman’s Party 1912-1920 (Lanham, Md.: University Press of America, 1991), 203. A list of the various works and positions that Kellogg held during her career can be found in the Who’s Who of American Women: A Biographical Dictionary of Notable Living American Women. (1964-1965), (Chicago: Marquis-Who’s Who, 1963). A short summary of some of Kellogg’s accomplishments may also be found in Rhoda Kellogg and Scott O’Dell, “About the Authors,” The Psychology of Children’s Art (New York: Random House, 1967). The birth of her daughter as well as evidence of her residing in New York can be found in the “United States Census, 1940” at https://familysearch.org/ark:/61903/1:1:KQ1J-Q2X. The death of Kellogg’s daughter is noted in “Deaths,” The Brooklyn Daily Eagle, December 9, 1942, 15, and can be accessed online at http://www.newspapers.com/newspage/52668226/. A list of Kellogg’s published writings can be found in her book Children’s Drawings/Children’s Minds (New York: Avon, 1979). Kellogg’s accomplishments as director of the Golden Gate Kindergarten Association are described in “On the Personal Side,” Bulletin of the National Association for Nursery Education, Vol. 1, No. 4 (1946). For Kellogg’s obituary, which lists some of her many accomplishments, see: “Rhoda Kellogg,” The San Francisco Chronicle, August 29, 1987. An additional list of her accomplishments can be found on the Phoebe Hearst Preschool website at: http://www.phoebehearstpreschool.org/history/rhoda-kellog/. The California Historical Society also has a collection of journal notes by Kellogg catalogued as: Journal Notes, Rhoda Kellogg Collection, Box 1 and 2. 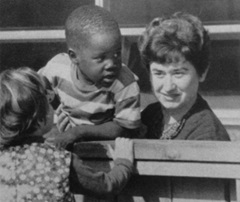 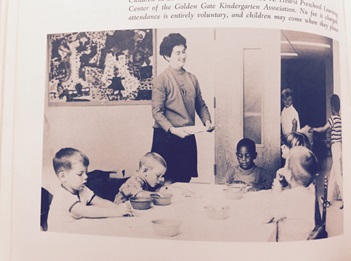