Florence Brooks, one of Maine’s most important leaders in the fight for women’s voting rights, was born on October 29, 1869. Her mother was Mary Caroline Wadsworth (related to the Wadsworth Longfellow family). Her father was Samuel Spencer Brooks, a prosperous businessman whose various enterprises were sufficient to maintain his large family in substantial comfort. Florence attended Augusta public schools and then St. Catherine’s Hall, a private finishing school affiliated with the Episcopal Church. Rather than attend college she spent several winters studying music, languages, drawing, and painting in Boston. She also took a trip abroad through Europe and the Middle East; in 1892, she spent an entire winter floating up and down the Nile River on a dahabeah with the McCormick family (whose ancestor had invented the reaper). Florence finally returned to Maine in 1894 to marry Robert Treat Whitehouse, a local boy and a former schoolmate, whose father, William Penn Whitehouse, was Chief Justice of the Maine Supreme Court.

Their family soon expanded to include three sons, but Florence still managed to publish two romance novels with Little Brown and Company, one of which she also illustrated. These were The God of Things: A Novel of Modern Egypt (1902) and The Effendi: A Romance of the Soudan (1904). She did not become active in suffrage until about 1914, when the two older boys were away at school and the youngest had largely recovered from a bad bout of polio, which he had contracted in 1908. As an affluent woman with an egalitarian marriage, the issue of voting rights for women had not really concerned her prior to this. Yet her volunteer work on progressive issues in Portland’s Civic Club had helped kindle in Florence a moral outrage about societal conditions affecting women and children that only changes to laws could resolve. Women’s votes, she believed, were key to changing those laws.

Florence joined the Maine Woman Suffrage Association (MWSA) in 1914 and very soon became one of its leading organizers. It helped that she had support from both her husband and his father; Judge Whitehouse had been among those first advocating for suffrage in 1874, and Robert, also an attorney, helped found the Men’s Equal Suffrage League in 1914 and served as its chair. MWSA devoted most of its energy to getting suffrage approved at the state level. Efforts to win legislative support failed in 1913 and 1915, but MWSA was successful in getting a statewide referendum vote on suffrage in 1917.

Before long Florence was in great demand as a speaker and debater, and she contributed frequently to MWSA’s suffrage column in the Lewiston Journal. Everyone expected that she would become MWSA’s next president but in 1915, following an unsuccessful effort to persuade the Maine legislature to approve a suffrage referendum, she helped form the Maine branch of the Congressional Union (CU). The CU was an upstart group formed in 1913 by Alice Paul and Lucy Burns, and focused solely on amending the United States Constitution to give women voting rights. Florence was the only Maine suffragist willing to participate in- and to defend publicly- the CU’s “radical” actions, which included picketing President Wilson, and this earned her condemnation from her more conservative colleagues. She resigned from MWSA in late 1917 following the decisive defeat of the statewide suffrage referendum, but continued to chair the Maine branch of the CU.

In 1918-1919 Florence led the effort to pressure Maine’s US Senator Frederick Hale to vote in favor of the federal amendment. Eventually the federal amendment was approved by the US House, and there were only a handful of votes needed to get it through the Senate. Hale was on the short list of senators who might be persuaded to support the amendment, and Florence organized letter writing campaigns, delegations, speeches and other efforts to get him to change his mind. Ultimately, the missing vote was found elsewhere; Hale voted against it but, when it was safely passed, changed his vote to "yea" so he would be on record as having supported it.

In June 1919 the United States Congress finally passed the Susan B. Anthony Amendment giving women the right to vote, and the race was on to persuade 36 of the 48 states to ratify it in time for women to vote in the 1920 presidential election. On November 4, 1919 Governor Milliken called the Maine legislature into special session to ratify the amendment, and Florence and Alice Paul fought off dramatic, last-ditch efforts by anti-suffragists to defeat it; it passed the House by only four votes. Maine was the 19th state to ratify the 19th Amendment.

Florence continued to work with the Congressional Union (which became the National Woman’s Party in 1916) well into the 1930s to try to pass the Equal Rights Amendment, but she also devoted considerable time to peace work. She joined the National Council on Prevention of War, chaired the Government and International Cooperation Committee of the Maine League of Women Voters, served as the state Chairman of Government and International Cooperation for the Maine Federation of Churches, and represented the State Peace Commission on the World Unity Council. She also had a weekly radio program on peace on WGAN.

Florence Brooks Whitehouse passed away on January 23, 1945 at the age of seventy-five. In recognition of her contributions to women’s social and political equality she was inducted into the Maine Women’s Hall of Fame in 2008.

Mrs. Robert Treat Whitehouse of Portland, Me., Chairman of the Maine Branch of the National Woman's Party, 1916. Accessed at the Library of Congress website, https://www.loc.gov/item/mnwp000061/. 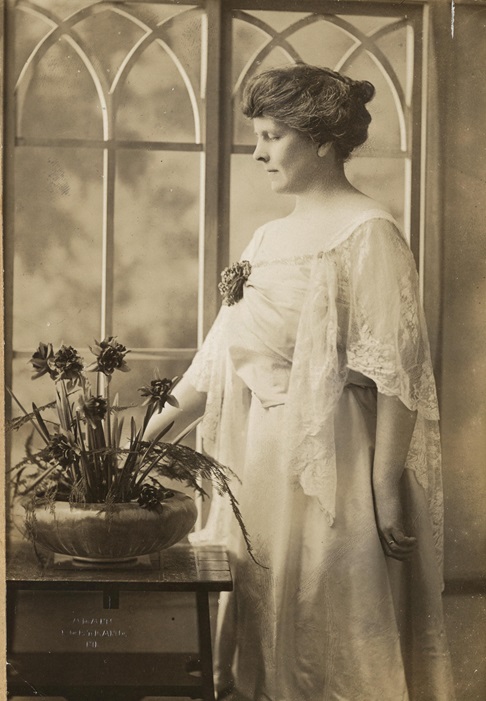