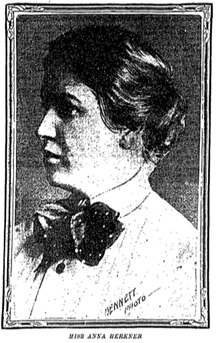 “I think the only question as to what constitutes women’s work is given a certain work, does she do it as well as a man?” – Anna Herkner, The Baltimore Sun

Anna Herkner was born in Cedar Rapids, Iowa in 1879. Herkner resided in Iowa and California during her youth and teenage years and attended the University of California to study sociology, Russian, and other Slavic languages. Following her college graduation, she traveled to Eastern Europe and Russia for fifteen months to study the social environment and conditions for immigrants.

Herkner moved to Baltimore in 1906 and worked as the head resident at the Ann Street Settlement, a community-supporting organization in the Polish quarter that worked “for the promotion of the cause of civic and social betterment in Washington and Baltimore” (Social Welfare Society). Anna Herkner then established The Polish Coffee House in September 1908 to promote socialization, English classes, and recreational activities like dancing among Polish Baltimore residents. During her time at the Ann Street Settlement, Anna Herkner traveled back and forth at least three times by boat from Russia to America, masquerading as an immigrant so that she could gather information for the Federal Immigration Commission and report first-hand experience of the “animal-like” conditions aboard the vessels. She is included in the Wikipedia page for White Star Line, a British Shipping Company that transported immigrants.

Anna Herkner was familiar with Slavic languages and applied for positions with the Federal Immigration Bureau as an inspector. She faced discrimination for being a woman and was told that men were inspectors, but that she could do the same line of work, at less pay, and be called a “matron” instead. Herkner turned down this offer and worked at the Austrian Immigrant Home for a short duration before she found a job at the Federal Immigration Commission. In this position, she was sent to Europe again to “immigrate” to the United States to report on the conditions aboard the ships. Herkner is remembered primarily for her influential reports aboard the immigration ships that helped to create regulations for proper immigration policies.

Herkner resigned from the Maryland Bureau of Statistics and Information in 1916. Herkner is cited in multiple books and newspaper articles for her eye-opening social and immigration work that influenced conditions for immigrants, women, and children. Her work with child labor laws and immigration rights was influential and her writing and interviews helped shape the way government agencies highlighted the need to protect women and children.

The women’s suffrage movement aligned with Anna Herkner’s beliefs in fair and equal treatment of women. Notably, she was a suffrage speaker alongside Mrs. Donald R. Hooker and Thomas H. Buckler on June 2, 1915 at the Belair County Club. She is remembered in social circles and clubs, for her speeches and attendance of suffrage events, and for her participation in the watchfires and protests in front of the White House. On February 9, 1919, the suffragists began to make speeches outside the White House gates and were arrested as they implored President Wilson to champion passage of the bill creating a federal suffrage amendment. A large crowd formed and police announced that the women were in a “military zone” to reduce crowd interventions. Anna Herkner was arrested with 38 other women, including Lucy Burns. A detailed report of her arrest and the suffrage events was included in the Baltimore Sun on February 10, 1919 noting that 65 women were arrested.

Herkner wrote an article about child labor conditions in the Maryland Suffrage News while she worked at the Maryland Bureau of Statistics in 1916. She also wrote an essay about child labor titled, “Woman’s Place in Law Enforcement,” in 1914. Herkner was a member of the Woman’s Suffrage Party of Maryland and notably attended a party dinner to support Dr. Lilian Welsh and Mrs. Beatrice Forbes-Robertson Hale that was reported in the Baltimore Sun. She was interested in the success of the Woman’s Trade Union League in Baltimore and worked to promote more humane hours and conditions for women working in paper bag factories and binderies. Her involvement with women’s rights, the suffrage movement, and child labor enforcement was extremely important and promoted awareness and change to the conditions and expectations for women and children in the work force.

Anna Herkner is also remembered for her responsibilities as a factory inspector to enforce child labor laws. In 1912, she was promoted to an assistant position under Frank White, the chief of the Maryland Bureau of Industrial Statistics and Information.

Herkner left Baltimore to continue her social service work in New York. In 1922 she went to Russia as a field director of the American Service Committee.

Anna Herkner died in Philadelphia at 80 years of age on December 3, 1959. She had very few relatives and never married.

A photograph and honorary recognition of Anna Herkner in the Baltimore Sun, May 8, 1912.

A memorial to Anna Herkner and information about her death can be found in the Baltimore Sun, “Miss Herkner Dies, Fought Child Labor,” 4 December 1959.

Anna Herkner is noted as an alumna of the University of California: https://books.google.com/books?id=q0wzAAAAIAAJ&pg=PA135&lpg=PA135&dq=anna+herkner+life&source=bl&ots=YsZWFncSCs&sig=v-2ForFORjKP1SBx5LHp3vcDSl8&hl=en&sa=X&ved=0ahUKEwjUi6fX37nMAhUE9h4KHYu_BNcQ6AEIKzAE#v=onepage&q=anna%20herkner%20life&f=false

Information regarding Anna Herkner’s work with the Ann Street Settlement and the Polish Coffee House at: http://www.socialwelfarehistory.com/settlement-houses/settlement-workers-of-washington-dc-and-baltimore-md/

Interview and citations of Anna Herkner can be found in Industrial Relations, Volume 2 by Francis Patrick Walsh and Basil Maxwell Manly, pp. 1315-23. Her immigration work is also elaborated on in Katherine Benton-Cohen, “The Rude Birth of Immigration Reform,” The Wilson Quarterly, 34:3 (Summer 2010), 16-22. She is also quoted in Valerie Conner, “‘The Mothers of the Race’ in World War I: The National War Labor Board and Women in Industry,” Labor History, 21:1 (Dec. 1979), 31-54.

Anna Herkner is mentioned as a speaker in “Maryland and the Virginians,” Baltimore Sun, June 2, 1915.

Herkner’s resignation from the Bureau of Statistics and Information is reported in the Baltimore Sun, May 10, 1916.

Details of Anna Herkner’s arrest and participation in the watchfire on February 9, 1919 can be found in Inez Haynes Irwin, The Story of the Woman’s Party (New York: Harcourt, Brace, 1921), p. 404.