Mrs. Mary Carroll Dowell was born in New York in January, 1866. Her parents were Irish immigrants who had first emigrated from Ireland to Luzerne, PA. According to the 1920 United States Federal Census, Dowell resided in Ward 24, Philadelphia, PA with her husband Mr. William F. Dowell. William was a renowned clerical manager at a publishing house in Philadelphia. They both had worked in magazine editing and writing, which is where they met. Mrs. Dowell never had children and dedicated her life to suffrage work.

Mrs. Dowell was a state officer for the Pennsylvania branch of the National Woman’s Party as well as an active club and suffrage worker in both Pennsylvania and New Jersey. On behalf of the N.W.P., on January 27, 1919, she was arrested along with five other women, as participants in a Watchfire demonstration. Although she was not brought to trial, she did spend five days in District Jail. She was one of 166 to earn a “prison pin,” which was an emblem of sacrifice of individual liberty for the liberty of all women.

Most of the information in the biography about Mrs. Dowell’s life outside of her suffrage work was found at Ancestry.com, and the 1900 and 1920 United States Federal Censuses. Her life as a suffragist is detailed in Caroline Katzenstein, Lifting the Curtain: The State and National Woman Suffrage Campaigns in Pennsylvania As I Saw Them (Philadelphia: Dorrance & Company, 1955). She is also included in Doris Stevens, Jailed for Freedom (New York: Boni and Liverlight, 1920). 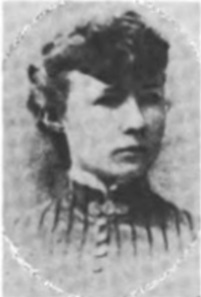