Mrs. Estella Eylward was born in 1880 in New Mexico. She was born Estella Ladds to Mercy A. Ladds, a native of New York, and a father from Illinois. Her father's name is not known but for a time he worked as an attorney in Los Angeles. In January 1891, at age 11, Estella participated in the Second Annual Tournament of Roses in Pasadena, CA.[1] The celebration included a parade, and a variety of competitions such as foot races, horse races, tugs of war, jousts and a tourney of rings. Estella competed in a horse race at the tournament but, as reported by the Los Angeles Herald, lost to Miss Mamie Pearce. Estella grew up in Los Angeles, and later studied at Stanford University. Having a legalistic mind, she studied law in her father's office and was an aspiring businesswoman, who traveled extensively throughout the United States.

Prior to marrying Jacob Eylward in 1903, Estella is listed as a widow (under the name Estella Vouraka) and living with her mother (also a widow) at 1310 Temple Street, Los Angeles. Nothing is known of her previous husband. Her travels then brought her to the South, mainly Mississippi, Alabama and Louisiana. She married James Jacob Eylward on September 15th, 1903 in New Orleans. A 1909 city directory has her living at the Southern Hotel in Mobile, Alabama with her husband. By 1914, however, the Eylwards were living at 1312 Temple St. in Los Angeles, which had been Estella's mother's residence. At the time, Estella's employment is listed as a stenographer. Despite living in California, Estella continued to struggle for the vote for southern women.

Eylward's documented suffrage activity is limited to 1919. The date that she joined the National Woman's Party (NWP) or began working for suffrage is unclear. On February 7, 1919, Eylward, along with Miss Willie Grace Johnson of Shreveport, LA traveled to Washington, D.C. The women carried a 29 foot long petition, signed by thousands of southern Louisianans in support of women's suffrage. Eylward and Johnson presented this petition to Louisiana Senator Edward J. Gay, asking him to vote in favor of the suffrage amendment. Eylward also took part in a February 1919 watchfire demonstration, where President Wilson was burned in effigy. She was subsequently arrested and was sentenced to five days in District Jail. At her court arraignment following the watchfire demonstration, Eylward stated, "I took part in the demonstration yesterday in which President Wilson was burned in effigy because the President has failed to do what he could to extend democracy in the United States… President Wilson has been acclaimed as the prophet of democracy in foreign lands. In his own country women who are obliged to submit to authority have no choice in their own government. I demand that President Wilson make himself a true prophet of democracy by giving us not only words but deeds."[2] Later that year, Elyward participated in the Prison Special, a three-week national tour to inform women and men around the country of the harsh conditions suffragists had encountered while under arrest.

Traces of her life following the Prison Special are scant. By 1921 the Eylwards were no longer included in the Los Angeles directory.

Information on Elyward's participation in the Tournament of Roses as an adolescent was found in the Los Angeles Herald, January 2, 1891, and is available online at: http://cdnc.ucr.edu/cgi-bin/cdnc?a=d&d=LAH18910102.2.46. The information detailing her youth and schooling is found in the article "Battles of Men For Vote Reviewed Suffragists to Hear Talk Friday," New Orleans Item, December 26, 1918, p. 13. Additional information on Eylward's addresses and occupation were found at Ancestry.com. Her marriage certificate was found in the Louisiana Archives under "1903 Orleans Parish Grooms' Marriage Index" and is available online at: http://files.usgwarchives.net/la/orleans/vitals/marriages/index/groom/1903mgaf.txt

On the petition to Senator Gay see: "Suffragists Send Petition To Gay. Mrs. Eylward Leaves for Washington With Many Signatures," New Orleans Item, February 8, 1919, p. 6. Other newspaper articles detailing her activity include: "Woman Suffrage Largely Beaten by Southern Men. Fourteen Senators from the South Vote Against Amendment," New Orleans Item, February 12, 1919, p. 8. Also, "SUFFRAGISTS OFF IN 'PRISON SPECIAL'; Women Who Have Been Sentenced for White House Disturbances Will Tour Country. WILL WEAR JAIL CLOTHES As They Demand the Passage of the Federal Amendment--A Who's Who of the Militant Party," The New York Times, February 16, 1919. Information about her career and sentencing for the watchfire demonstration is included in Doris Stevens, Jailed for Freedom (New York: Boni and Liveright, 1920). 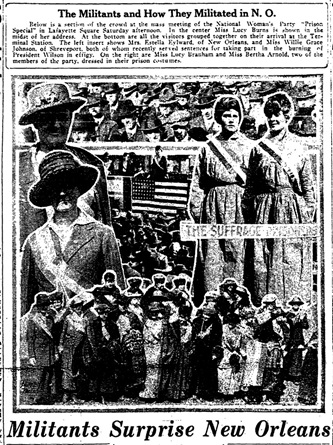 This photo was found in the America's Historical Newspaper database. The newspaper is the New Orleans Item, February 23, 1919, page 1. 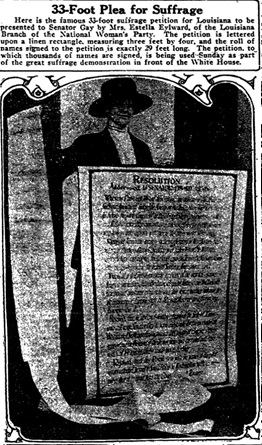 1. The Tournament of Roses began in 1890 and continues to present day. It is one of the most historical parades or festivals in the United States. It commenced when affiliates of the Valley Hunt Club elected to stage a parade of flowers with decorated horse-drawn carts and an afternoon of public games on a city lot. Over 2,000 people were in attendance at the first tournament. See http://www.tournamentofroses.com/history/timeline.
Back to Text