Betty Gram Swing was born Myrtle Gram in Omaha, Nebraska on March 16, 1893 to Andreas Peter Gram and Karen Jensen, both Danish immigrants. One of seven children, she grew up on a farm in Omaha. The family moved to Portland, Oregon about 1904, where her father ran a grocery store. She graduated in 1912 from the brand new Jefferson High School and attended the University of Oregon in Eugene for one year before having to leave because of family finances. Gram taught for one year in a rural school and two years at the Frazer Detention Home, part of Portland's newly formed juvenile detention system, before moving to New York City in 1916 to study voice. As she began a stage career, she changed her first name to Betty.

Gram left musical theater and became part of the suffrage movement with the National Woman's Party. When Betty stood outside the White House, she was lobbying for a right she had already exercised in Oregon where she had been a registered voter since at least 1914. On November 10, 1917, Betty and her sister, Alice Gram, along with many other militant suffragists, were arrested for "obstructing traffic" while picketing and sentenced to thirty days in the Occoquan Workhouse, where both experienced the "Night of Terror," and took part in an eight-day hunger strike. Camilla Whitcomb, another suffragist, was Betty's cellmate for the first night, and the two became close friends. Gram Swing and Whitcomb joined forces again at a protest in front of the Massachusetts State House in Boston on February 24, 1919. Twenty-two women were arrested for attempting to picket President Wilson, just returned from the Paris Peace Conference, to help secure the last vote needed in the Senate to pass the 19th Amendment and send it to the states for ratification. Sixteen of them were sent to the Charles St. Jail. Despite journalistic efforts to claim otherwise, the jail conditions were unsatisfactory, and Gram Swing was among those who went on a five-day hunger strike to increase publicity for their cause.

Gram Swing worked full time for suffrage as a member of the National Woman's Party from 1917 to 1920, first as advertising manager for "The Suffragist," and then as one of the national organizers. She lobbied in Congress and gave speeches nationwide in favor of women's suffrage as well as organizing local branches of the National Woman's Party. She became known as the "Singing Suffragist" for ending her speeches with suffrage songs sung in jail. She participated in and organized "Prison Specials," trains of formerly imprisoned suffragists who would speak to large crowds throughout the United States about their experiences in jail. After the 19th Amendment was passed by Congress in June 1919, she headed campaigns to lobby state legislatures to ratify the amendment in a number of states, including Massachusetts, West Virginia, Virginia, Delaware, and New Jersey, where she was credited with success despite fierce opposition. She worked closely with Sue Shelton White throughout the hotly contested campaign in the state legislature of Tennessee, the final state needed for ratification. She maintained close ties and kept up correspondence with other NWP suffragists, including Whitcomb, Doris Stevens, Sue Shelton White and Anita Pollitzer. She continued to collaborate with Alice Paul for many years.

After the vote was won, Gram Swing moved to Europe, living in Berlin to study voice for two years and then England for twelve years. She married broadcast journalist Raymond Swing in 1921, and rather than taking his last name, she persuaded Raymond that the couple should combine their last names. The Swings had three children; Peter, Sally and John. Betty and Raymond divorced in 1944.

While residing in England, Gram Swing was the only non-British member of The Six Point Group executive committee, a British feminist group that included Viscountess Rhondda, Rebecca West, and Vera Brittain. They successfully lobbied in 1928 for the "Flapper Vote," which reduced the voting age for women from 30 to 21, and removed the requirement of property ownership. She also worked closely with Alice Paul and her World Woman's Party on international women's rights. She organized and was Chairman of the London Committee of the National Woman's Party, frequently representing this organization at diplomatic conferences in Europe. She spent time in Dublin successfully petitioning President de Valera, of the newly-formed Irish Free State, to include equality for women in his Citizenship Bill. She was one of the international group of Feminists who attempted to present the Equal Rights Treaty to the Peace Ambassadors at the Chateau de Rambouillet, near Paris, in August 1928, when the ambassadors were in France to sign the Kellogg-Briand Peace Pact. For this attempt she, along with Doris Stevens and others, was arrested. She assisted Doris Stevens, Chairman of the Inter American Commission of Women in her feminist work with the League of Nations in Geneva, and continued to work with the same group after moving back to the United States.

After returning to the United States in 1934, Gram Swing remained a dedicated member of the women's movement. She was elected a member of the NWP's National Council in 1934, living in Washington, D.C. during this time. As Chair of the NWP Ways and Means Committee, and a member of the NWP Congressional Committee, she lobbied Congress for years for the passage of the Equal Rights Amendment. She joined the Women's City Club of Boston in 1943 and was the head of the Massachusetts branch of the NWP. Gram Swing traveled internationally during this time, contributing to various women's movements throughout Europe. One of her proudest achievements was working with British feminist Lady Pethick-Lawrence in 1946 to successfully lobby the First General Assembly of the United Nations to form a sub-commission on the status of women, which later became a full commission that still exists today.

Betty was very involved in child refuge relief during World War II, including successfully lobbying Congress for the bill, "Mercy Ships for Children." Perhaps because of this, the couple took in a young British refugee named Gabriel Newfield from 1939-1941, remaining in touch with him after his return to England in 1943.

Gram Swing was one of the organizers of the "Picket Dinner," an annual gathering in the 1930s of those suffragists who had been involved in various picket protests. It would seem that, for Gram Swing personally, these kinds of reunions were motivated by the political atmosphere of the late 1930s; in her invitation to her "fellow picket[s]" she noted the "fascist ideology which is sweeping the world and which threatens to deprive citizens, especially women, of all their rights" as a reason for the suffragists to reunite and reminisce about their fight for justice. Gram Swing began work on an autobiography, and though it was not completed before her death, her life remains well chronicled through her surviving papers, now held at the Schlesinger Library. 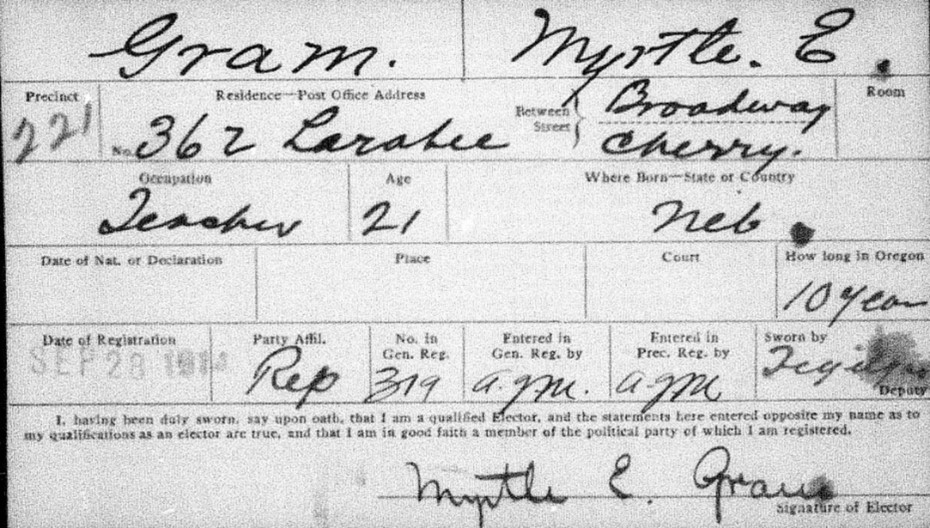