Mrs. Gertrude Hunter was a native of Minnesota who was best known for her passionate participation in the women’s suffrage movement in the early 1900s. In October 1913, Hunter, along with other Minnesota suffragists, formed the Women Workers’ Suffrage Club and she was elected president. She also served as secretary of the Minnesota Woman Suffrage Association (MWSA) and founded the Wage Earner’s League of Minneapolis.

Hunter became a national organizer for the Congressional Union of Woman Suffrage in 1914. The Union encouraged radical tactics like picketing, petitioning, parades and hunger-strikes to bring attention to the need for a federal Constitutional Amendment guaranteeing women the right to vote.

In September 1914, Hunter traveled to Wyoming on behalf of the Congressional Union to campaign against Democratic candidates running in the congressional elections. She and many other Congressional Union organizers successfully made women’s suffrage a prominent political issue in the election races. On October 31, Hunter was published in The Suffragist. She wrote about the campaign:

“The meeting last Saturday night was most encouraging. I sold twenty Suffragists and could have disposed of more if I had them with me. Everyone was much interested.”

The Suffragist tended to publish only the positive words of the organizers. Yet Hunter also wrote to the newspaper saying:

“It is very hard to keep enough courage from one day to another, to work against this blank wall of indifference which is so much more killing than opposition.”

While secretary of the MWSA in January 1915, Hunter and a Miss Matthews of Ohio were sent to work on behalf of the organization in Ramsey and Hennepin counties (Minnesota) for three months.

Hunter became an organizer and officer of the Minnesota branch of the Congressional Union on June 28, 1915. Hunter, alongside Elsa Ueland and Josephine Schain, helped organize a meeting with Representative Charles R. Davis in St. Peter on July 30. They all encouraged Davis to vote for the federal amendment. The three militant suffragists also held street meetings and afternoon gatherings in La Seuer and Shakopee to recruit more members to the Congressional Union and light a fire in the hearts of others about their cause.

On August 28, 1917, Hunter joined in picketing the White House. She and fellow suffragists were arrested while carrying banners decorated with suffrage colors and quotations from President Wilson’s speeches. Their charge was obstructing traffic. While in jail, Hunter went on a hunger strike, but was force fed liquid through her nostrils by police officials.

Hunter’s involvement and leadership in specific organizations is noted at Women of Protest: Photographs from the Records of the National Woman's Party, Manuscript Division, Library of Congress, Washington, D.C., accessed 9/23/2015, http://www.loc.gov/item/mnwp000404/#about-this-item. She is also included Stanton, Anthony, Gage, History of Woman Suffrage, Vol 6, p. 320. Information on the Congressional Union (CU) and Hunter’s trip to Wyoming is noted in The Library of Congress, American Memory Women of Protest: Photographs from the Records of the National Woman’s Party, Washington, D.C., accessed 923/2015, https://www.loc.gov/collections/women-of-protest/. Quotes from Hunter’s writings in The Suffragist were noted in Inez Haynes Gillmore, The Story of the Woman's Party (New York: Harcourt, Brace and Co, 1921), 80-82. Hunter’s involvement with the Minnesota branch of the CU is documented in Barbara Stuhler, Gentle Warriors: Clara Ueland and the Minnesota Struggle for Woman Suffrage (Minneapolis: Minnesota Historical Society Press, 1995), 133-135. The specifics on Hunter’s experience and arrest can be found in Clara Fuller’s account of White House picketing, available at: http://heschistory.blogspot.com/2013/07/clara-fuller.html. 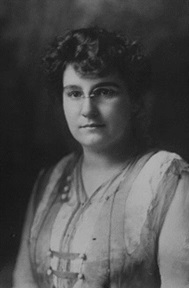