Ellen Winsor was born on November 30, 1882 in Haverford, Pennsylvania. She was the daughter of James Davis Winsor and Rebecca Chapman Winsor, and was one of five children. Throughout most of her life she lived with one of her sisters, Rebecca. She was a strict vegetarian and became a vegan, a word that did not exist at the time, during World War II. Along with her two sisters, Rebecca and Mary, Ellen was a woman suffrage activist with the Congressional Union/National Woman’s Party (CU/NWP).

Seventeen Pennsylvania women were arrested for picketing the White House, the Winsor sisters included. The NWP picketing campaign began in January 1917 and continued through November, its purpose to pressure President Wilson into supporting a constitutional amendment for woman suffrage. Mary was the most involved of the Winsor sisters and was one of the four Pennsylvania militant suffragists to be sent to Occoquan Workhouse. In all, Ellen was arrested a total of three times, two for suffragist action. First, she was arrested in the summer of 1917 with her sister Mary and forty-five others for climbing a statue while protesting, but they were officially charged with “holding a meeting on public grounds.”[1] The NWP instructed their demonstrators to choose jail over any fines imposed in order to gain media attention; like most, Ellen did choose jail. She spent five days in District Jail in January 1919 for a “watch fire demonstration” at the Lafayette Monument.[2] Ellen and Rebecca were bailed out from jail by their brother, Dr. Henry Winsor. Dr. Winsor later described bailing the two out of jail as “the damndest foolish thing” he’d ever done.[3] Mary refused to be bailed out of the Occoquan Workhouse when their brother bailed out Ellen and Rebecca. Eventually, all three sisters were free, and wore small china pins to show that they had been there.

Ellen was an author, activist, and eventually a self-declared anarchist. As a young woman, Ellen worked for the NAACP but resigned in 1917 when the organization supported the war effort. Ellen was in correspondence with one of the biggest names in the African American rights movement at the time, W.E.B. Du Bois.

According to her nephew, Curtin Winsor, Ellen never used her hard-won right to vote, instead choosing to be a philosophical anarchist, who did not believe in organized government. Ellen and Rebecca called themselves “anarchists,” and wished for everyone to be able to do as they pleased. Though the topic of politics frequently came up in conversation, the two Winsor sisters did not consider themselves to be political, or even members of a particular party.

1922 saw Ellen’s third arrest, this time for “disorderly conduct, breach of the peace and inciting to riot” at the Metropolitan Opera House. On Wednesday, April 26, 1922, Ellen and Rebecca were petitioning members present at an Opera House meeting to sign a petition demanding the release of political war prisoners being held in Federal penitentiaries. The prisoners were the “wobblies,” or members of the radical Industrial Workers of the World, who were arrested for violations of wartime legislation for protesting American involvement in World War I. Ellen was “instrumental” in securing the March 1922 transport of Edward F. Doree, Pennsylvania I.W.W. leader, from where he was serving a ten-year sentence in Federal Prison in Fort Leavenworth, Kansas, to the Episcopal Hospital in Philadelphia, Pennsylvania, where Doree’s ill son was being treated.[4]

In 1942, Ellen and Rebecca wrote a book, Land, Labor, and Wealth: A Handbook of Economic Terms, which comprised passages from books they loved. The two also donated the proceeds from the sale of their estate to the Radnor Memorial Library in Wayne, PA, where the Winsor Community Room was opened in their honor.

In addition to her political activism, Winsor loved to host parties, and did so at every occasion. She would serve many different types of “pure,” or vegetarian food.[5]

Ellen Winsor passed away on July 25, 1959 at the age of 76, in her home on 658 Brooke Road, in Radnor Township, Pennsylvania. According to her death certificate, her cause of death was malnutrition, a condition that she had been suffering from for over ten years. Although Miss Winsor had played many roles in Pennsylvania society, her official occupation listed on her death certificate was “Professional Agitator,” which is very fitting for an active suffragist-turned political anarchist. 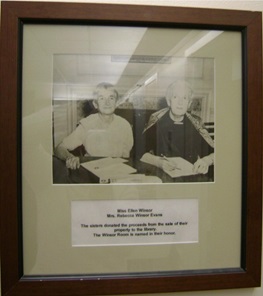 Ellen (left) with sister Rebecca
This photo is posted online at: https://inwinsr.wordpress.com/about-2/ 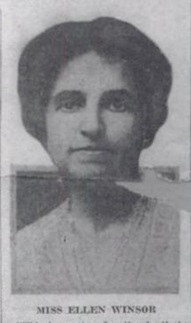 Photo printed along with the story of her 1922 arrest in: Ellen Doree, A Wobbly Life: IWW Organizer E.F. Doree, 96

Betsy Anderson wrote a lengthy account of the obstacles suffragettes faced, which features commentary on Ellen Winsor and her sisters. A very detailed biography of the Winsor sisters was printed in Caroline Robbins, “‘Friendship, Love and Peace’: The Winsor Sisters,” The Bulletin of the Radnor Historical Society 1, no. 10 (Spring 1960): 9-13. Ellen Doree Rosen wrote a book on her father, E.F. Doree, and his involvement in the I.W.W. It features Ellen Winsor’s involvement both with Doree directly and highlights some of her political activism on behalf of the I.W.W. prisoners. Her actions are detailed in Ellen Rosen Doree, A Wobbly Life: IWW Organizer E.F. Doree (Detroit, Michigan: Wayne State University Press, 2004), 182. Details about Winsor’s involvement in the watch fire protests and her subsequent arrests are in Doris Stevens, Jailed for Freedom (New York: Boni and Liveright, 1920), 370. Additional information about Winsor’s arrests and protests can be found in Inez Haynes Gillmore, The Story of the Woman's Party (New York: Harcourt, Brace, 1921), 356-58. Information about Ellen and Rebecca’s estate sale and donation to the Radnor Memorial library can be found at: http://radnorhistory.org/bulletins/RHSBulletin.1-10.1960.pdf (page 9).

Additional information and sources about Winsor’s life can be found on Ancestry.com.

1. Inez Haynes Gillmore, The Story of the Woman’s Party, 357.
Back to Text

3. Betsey Anderson, “The Struggle for Women’s Suffrage – and the Aftermath.” Online at http://articles.philly.com/1990-08-28/news/25932935_1_grant-women-suffragists-league-of-women-voters
Back to Text

5. Caroline Robbins, “Friendship, Love and Peace,” 10.
Back to Text