Ella Riegel was born in Pennsylvania in 1866. She attended Bryn Mawr College, where she studied history, political science, and Spanish and graduated in 1889. During her studies, she took a special interest in anthropological and archeological efforts, became well informed about the Inca civilization, and garnered a fluency in French and German. At the age of 47, she became a member of the National Woman’s Party. As part of this movement, she was involved in staff affairs, financing, and picketing, the last of which resulted in her arrest.

Before joining the National Woman’s Party, Riegel was a member of the National Finance Committee of the Congressional Union for Woman’s Suffrage, serving as the business manager in the organization of two of the Union’s major campaigns. Actively involved in both the National Woman’s Party and the Congressional Union for Woman’s Suffrage, Riegel served as the Finance Chairman for the joint convention of the organizations held in Washington in 1917.[1]

Between April 9 and May 16, 1916, Riegel, along with more than twenty activist supporters of the Congressional Union, joined a cross-country trip on the “Suffrage Special.” This journey consisted of a five-week train ride through the Western United States, with the purpose of educating and recruiting women voters in the West. Riegel was appointed business manager and was granted her own office on the cross-country train in order to fulfill her duties.[2] During the Suffrage Special tour the women recruited supporters and compiled a petition for suffrage to present to Congress. Upon their return to Washington, D.C., the group “staged an automobile procession from Union Station to the Capitol to present their petition to Congress. The Senate officially recessed in order to receive the delegates in the Capitol Rotunda.”[3]

From August to October of 1916, the National Woman’s Party and the Congressional Union for Woman’s Suffrage reached out to states in which women already had the right to vote, sending representatives to lobby for federal legislation. Riegel and five others were tasked with lobbying in Colorado.[4]

On February 9, 1919, Riegel became one of several women who picketed the White House in support of women’s suffrage. She served as a color bearer for the organization, holding the purple, white, and gold banner.[5] She was one of several women arrested for this demonstration, many of whom would experience unusual cruelty, abuse, and force feeding while imprisoned.[6] Once the picketers were released, the organization took action to address the cruel conditions women’s suffrage activists faced. Riegel once more engaged in a train tour with the National Woman’s Party across the nation in 1919. Under the slogan “From Prison to People,” this tour sought to bring attention to the inhumane conditions jailed activists had faced. All of the 26 members of this tour, including Riegel, had experienced imprisonment firsthand.[7]

In the 1920 US census, Riegel is listed as a “suffrage worker” and living with a Bryn Mawr College professor in Lower Merion, Pennsylvania.[8]

From 1921 to 1925, Riegel helped deliver seven bills through the Pennsylvania legislature which allowed women more rights over their children and property as well as more agency in the handling of their own estates. She also attended conferences of the Women’s International League for Peace and Freedom in Vienna (1921) and Dublin (1926) and became a member of the Inter-American Commission of Women where she served in the realm of finances. In 1930, she further agitated for women’s rights at the First World Conference for Codification of International Law at The Hague. Her efforts took her through several European and Latin American nations to persuade ministries to support a treaty seeking equal treatment for women internationally. As a member of the NWP, Riegel became one of several women who worked with the Women’s Consultative Committee of the League of Nations.[9] She continued to agitate and travel for women’s rights until her untimely death in 1936. She had stopped travelling three months prior to her death of a heart attack.[10]

As displayed in her involvement in financial and business matters of the women’s suffrage movement, Riegel was known by many for her skillful dealings with money. After accruing significant wealth investing in stocks, Riegel made frequent donations to her Alma Mater, Bryn Mawr College, including a $50,000 donation in the mid-30s on the fiftieth anniversary of her enrollment. She also provided the funds to pay for a special professor in the Archaeology Department, a department she was particularly involved in. Her donations also included emergency replacements of equipment such as microscopes to the biology department. At her request, a small fund was set aside for a scholarship in the Archaeology Department as well.[11]

Thanks to her dedication to women’s suffrage and generous donations to the Archaeology program and library, Ella Riegel is memorialized by Bryn Mawr with the Ella Riegel Memorial Museum, which houses over 6,000 objects from ancient civilizations.[12]

Photograph and evidence of Riegel’s involvement in the League of Nations can be found at Harvard University Library Visual Information Access at: http://via.lib.harvard.edu/via/deliver/deepcontentItem?recordId=olvgroup1005049%2CRAD.SCHL%3A352579. Photographs of her involvement in the joint conventions of the Congressional Union for Woman Suffrage and the National Woman’s Party can be found at the Library of Congress at http://www.loc.gov/item/mnwp000157/. Information on Riegel’s involvement during the Suffrage Special is mentioned in Katherine H. Adams and Michael L. Keene, Alice Paul and the American Suffrage Campaign (Chicago: University of Illinois Press, 2007). Information concerning the Suffrage Special, of which Riegel was a key member, is detailed at the Smithsonian site for American History, at http://americanhistory.si.edu/blog/2014/03/traveling-for-suffrage-part-4-riding-the-rails.html. Mention of Riegel’s involvement during the Suffrage Special is also detailed in the Library of Congress collections, found at https://www.loc.gov/collections/static/women-of-protest/images/detchron.pdf. Riegel’s picketing and imprisonment is included in Inez Haynes Gilmore, The Story of the Woman’s Party (New York: Harcourt, Brace and Company, 1921). Details concerning the Prison Special are included in the article “The Prison Special: One Last Push for Women’s Suffrage,” available at http://mentalfloss.com/article/58477/prison-special-one-last-push-womens-suffrage. Other information on Riegel can be found at the Historical Society of Pennsylvania’s Digital History Projects at http://digitalhistory.hsp.org/pafrm/person/ella-riegel. Photographs and a detailed and personal record of Ella Riegel’s influence and involvement in Bryn Mawr College can be found in the Bryn Mawr College archives at "Ella Riegel Fellowship or Scholarship in Classical Archaeology," Ella Riegel alumna file, Record Group 12H, Special Collections, Bryn Mawr College, Bryn Mawr, PA. Further details of Riegel’s international efforts are recorded by Bryn Mawr in their archives at: Louise Watson, “Ella Riegel and her Legacy to Bryn Mawr,” Bryn Mawr College Alumnae Bulletin (Fall 1957) 28, no. 1. Biographical details, including photographs, are also available on Bryn Mawr’s website at: http://www.brynmawr.edu/library/exhibits/BreakingGround/newera.html and http://www.brynmawr.edu/library/exhibits/suffrage/pickets.html. 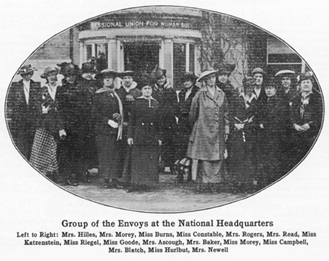 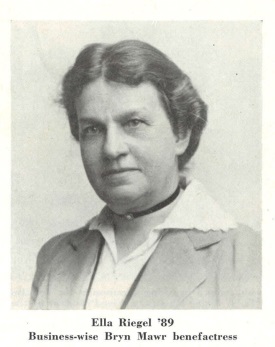 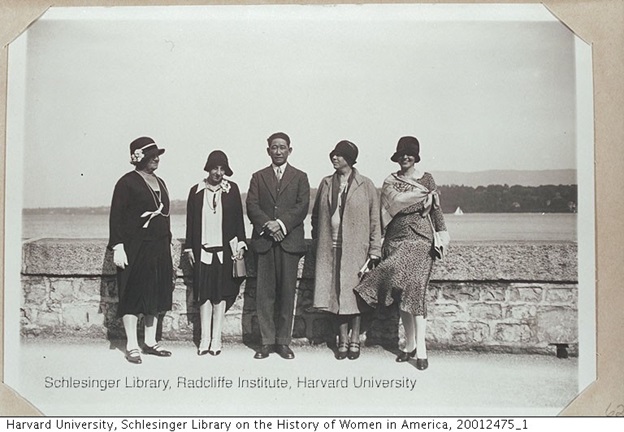 http://via.lib.harvard.edu/via/deliver/chunkDisplay?_collection=via&inoID=831879&recordNumber=1&chunkNumber=6&method=view&image=full&startChunkNum=0&endChunkNum=0&totalChunkCount=0 (Ella Riegel is the first from the left)

3. See: Patri O’Gan, “Traveling for Suffrage Part 4: Riding the rails.” Available at: http://americanhistory.si.edu/blog/2014/03/traveling-for-suffrage-part-4-riding-the-rails.html
Back to Text