Ella Bogue Clapp was born on January 10, 1870, in Bakersville, North Carolina to mother Alice Jane Conley and father Elisha Bogue Clapp. She had two older sisters, one older brother, and one younger brother. Her father was once considered one of the wealthiest men in North Carolina; he owned most of the mica interests in the area. Ella married lawyer Edwin St. Clair Thompson on October 25, 1908 in Epiphany Church, Washington D.C.[1] She then was commonly referred to as Mrs. Ella St. Clair Thompson. The Thompsons remained in Washington, D.C. for about 10 years.

Thompson was very involved in the women's suffrage movement throughout her life. She was the State Field Secretary for the Congressional Union (CU) and Chairman of the National Woman's Party in Spruce Pine, North Carolina, while also organizing many other conventions for the CU across other Southern States.[2] In March 1913, Ella marched in the DC suffrage parade organized for the day before Woodrow Wilson’s inauguration.

In 1915 Thompson went to New Mexico to recruit influential women for the establishment of a new branch of the Congressional Union.[3] Her work included organizing meetings, parades, and a delegation to United States Senators Thomas Catron and Albert Fall.[4] She made particular efforts in the recruitment of Hispanic women, printing leaflets in both Spanish and English. Although CU records suggest that only six Hispanic women became members of the organization, they were key players within the Hispanic CU movement and Thompson worked particularly closely with Adelina Otero-Warren, who would later become president of the New Mexico CU.[5] Thompson also visited Colorado, Arizona and Texas, engaging in similar work.[6]

The Republican presidential candidate in 1916, Governor Charles Evans Hughes, publicly supported a suffrage amendment to the U.S. Constitution, the goal of the CU/NWP. As a result, in August 1916, the NWP sent organizers, including Thompson, into the western states where women had won the vote. She spent the next three months speaking and organizing in Missouri in support of the federal suffrage amendment and against the Democratic Party, which at the time controlled both houses of Congress and the presidency. The aim was to hold the Democrats responsible for their failure to pass the suffrage amendment.[7] In May 1917, Thompson accompanied Alice Paul to Jacksonville, Florida, for a meeting organized with Mrs. Hannah Detwiller, state chairman, with the intentions of forming a new branch of NWP. However the movement in Florida proved to be far less influential than had been hoped for.[8] On January 10, 1918, the House of Representatives approved the Susan B. Anthony Amendment.[9] Many members of the NWP fanned out across the country to pressure senators on behalf of the amendment. Thompson was one of the delegates who went to Texas.[10] On June 4, 1919, the amendment passed in the Senate by a vote of 56 to 25.[11]

Thompson and her husband moved to New York City in 1918. In March 1919, Thompson participated in a demonstration outside of the Metropolitan Opera House protesting against President Wilson, who was speaking inside. She was arrested along with 23 other suffragists.

Between 1925 and 1928 she attended Fordham University Law School and the 1930 census found her living as a lodger in Manhattan and working as a lawyer. She was married but Edwin Thompson was not recorded in the same household.  Her husband passed away in 1933 and she moved back to North Carolina at some point between 1935 and 1940. Now widowed, with one servant living with her, she owned her home valued at $25,000 and continued to work as a lawyer.  Ella died on December 17, 1944, in Asheville, North Carolina.

For Edwin St. Clair Thompson's Last Will and Testament and confirmation of his 1933 death, see http://files.usgwarchives.net/nc/yancey/wills/thmpsn01.txt. For information regarding Ella Thompson's work in New Mexico, see: David Maciel and Erlinda Gonzales-Berry, "The Political Development of New Mexico Hispanas", in The Contested Homeland: A Chicano History of New Mexico (New Mexico: University of New Mexico Press, 2000) and Nan Amstutz, "League of Women Voters, at 75, Is Still Going Strong," Congressional Record, 141: 29 (14 February 1995), http://www.gpo.gov/fdsys/pkg/CREC-1995-02-14/html/CREC-1995-02-14-pt1-PgS2640-3.htm. Information on Mrs. Thompson's involvement in the CU can be found in Donald L. Haggerty, National Woman's Party Papers: The Suffrage Years 1913-1920 (Microfilm Edition, 1981). Contemporary reports on Mrs.Thompson can be found in A. Elizabeth Taylor, "The Woman Suffrage Movement in Florida," Florida Historical Quarterly, 36:1 (July 1957). See also The Washington Post, October, 26 1995, p. 1 and The Suffragist, 3:4 (May 1920). For her arrest at the Metropolitan Opera House, see New York Tribune, 5 March 1919. 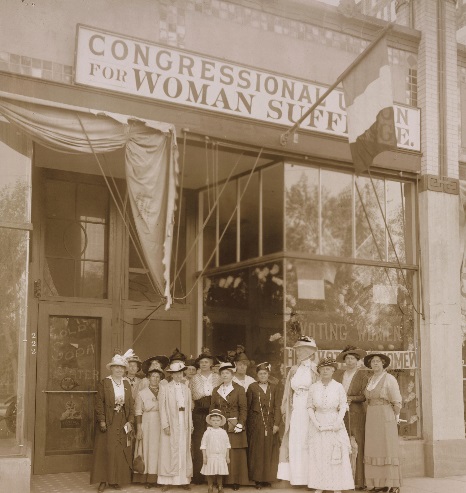 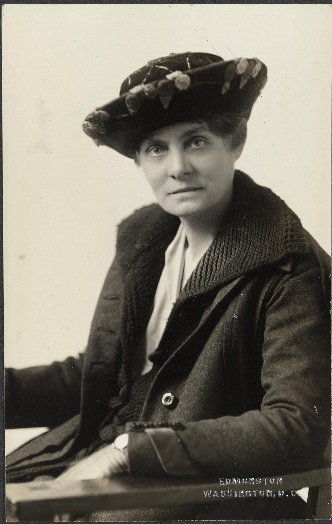 3. David Maciel and Erlinda Gonzales-Berry, "The Political Development of New Mexico Hispanas," in The Contested Homeland: A Chicano History of New Mexico (New Mexico: University of New Mexico Press, 2000), 198.
Back to Text