Elizabeth Selden White was born in Astoria, New York, on July 23, 1868. Her family roots on both sides ran deep in the United States. Her paternal great-great-grandfather was Roger Sherman, a signer of the Declaration of Independence and her maternal grandfather was Amos Beebe Eaton, a general for the Union Army during the Civil War. Her family was well off and sent both her and her sister Mabel (who went on to marry U.S. Secretary of War Henry Stimson) to Miss Porter’s Finishing School. On November 27, 1895, Elizabeth married John Rogers, a Columbia-trained thyroid specialist, in New Haven, Connecticut. Elizabeth and John had three children: John, Jr. (1899), Charles (1900-1903) and Elizabeth Selden Rogers (1907). The couple lived a comfortable life in New York where they had a large house and employed several servants.

Elizabeth’s status as a socialite enabled her to get involved in social issues soon after her marriage to John. Aside from being a member of the Connecticut Society of Colonial Dames of America, Elizabeth was involved in groups that worked to improve the public school system in New York City. Her service on the Executive Board of the Women’s Political Union of New York City catapulted her into the women’s suffrage movement.

Her first role as a suffragist was working as an executive board member for the Women’s Political Union of New York City. She later went on to become a member of the Advisory Council of the newly-founded Congressional Union for Women Suffrage in 1913. Elizabeth used her socialite status to her advantage in order to promote the women’s suffrage movement. The night before the March 1913 Suffrage Parade, Elizabeth arranged a meeting between Alice Paul and her brother-in-law, Secretary of War Henry Stimson, so that they could discuss the policing of the parade. Stimson promised the women that he would send in the U.S. Cavalry if they deemed that policing was insufficient -- all they had to do was send word and he would help. Unfortunately, a call to the cavalry became necessary after the marchers in the suffrage parade faced rough verbal and physical treatment from spectators and disinterest from police.

When parade organizer Alice Paul founded her own suffrage group, the Congressional Union (later the National Woman’s Party), Elizabeth Rogers became an active member, always willing to use her resources on behalf of the CU/NWP. On December 4, 1916, several women from the NWP attended President Wilson’s annual formal address to Congress.[1] The women sat in the first row of the visitor’s gallery.[2] From there, they dropped the iconic banner reading: “Mr. President, what will you do for woman suffrage?” Several months later, on July 14, 1917, Elizabeth Rogers was arrested during the Bastille Day NWP picket of the White House. The picketing, from January 1917, was designed to pressure the president to gain the necessary votes to pass the suffrage amendment. Rogers and the others were tried and found guilty. Rogers told the judge, “We know full well that we stand here because the President of the United States refuses to give liberty to American women.” Refusing to pay the assessed $25 fines, Rogers and the others were sentenced to 60 days at Occoquan Workhouse in Lorton, Virginia. Under considerable political pressure, President Wilson issued all the Bastille Day picketers a pardon after three days. After her arrest, Elizabeth was a forceful voice in the “Prison Special” tour that went around the United States and shared the stories of how suffragists were being treated by the government; she demanded that they fight back.

After the 19th Amendment was passed in 1920, Elizabeth did not give up her political activism. She spent much of her later life fighting for women’s rights, but particularly advocating for women’s income equality and lowering mandatory joint taxes for dual-income households. She wrote in one of several 1934 New York Times letters to the editor that filing mandatory joint returns “revives the old idea that married persons are one person and not two absolutely distinct individuals. I love my husband devotedly but I never tell him my income.”[3] After Congress voted to lower taxes for couples filing joint returns, Elizabeth retired in her New York home. She died on December 18, 1950, at the age of 82. 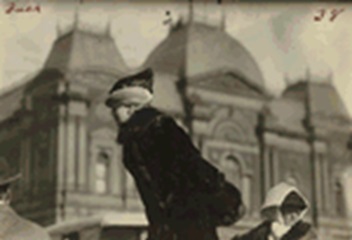 Details on Rogers’ early life and family can be found in Thomas Townshend Sherman, Sherman Genealogy Including Families of Essex, Suffolk and Norfolk, England (T.A. Wright, 1920), p. 352 as well as John W. Leonard’s Woman's Who's Who of America: A Biographical Dictionary of Contemporary Women of the United States and Canada, 1914-1915 (New York, New York: American Commonwealth Company, 1914), p. 698. Information on her involvement in the suffrage movement and the Prison Special can be found in Katherine Adams and Michael Keene, Alice Paul and the American Suffrage Campaign (Champaign: University of Illinois Press, 2007), pp. 92, 110, 138. Also see Inez Haynes Irwin, The Story of the Woman’s Party (New York: Harcourt, Brace, 1921), 155ff, and J.D. Zahniser & Amelia R. Fry, Alice Paul: Claiming Power (New York: Oxford, 2014/2019), 143ff. Information about Rogers’s work on income tax reform can be found in Patricia Strach, All in the Family: The Private Roots of American Public Policy (Stanford: Stanford University Press, 2007), p. 202. Additional information about Rogers can be found on Ancestry.com as well as findagrave.com.

1. The women in attendance for President Wilson’s 1916 address to Congress were Caroline Spencer, Mabel Vernon, Florence Bayard Hilles, Lucy Burns and Elizabeth Rogers.
Back to Text

2. According to Adams and Keene, Elizabeth’s husband had been given the tickets as a “thank you” for saving the life of a congressman’s wife.
Back to Text